British Airways has confirmed that the new ‘trolley style’ Club World dining service will launch on Friday.  This will be exclusively on the New York JFK route, with other routes being added during 2018.

Despite the images released during service trials, it seems that Bollinger will not be part of the new service.

Here is a typical menu released by BA yesterday:

Burrata and tomato carpaccio with olive oil and balsamic dressing 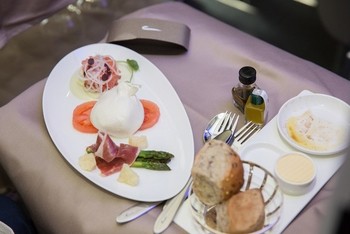 It has to be said that, because this is being overseen by DO & CO, the most exclusive airline caterer in the business, it could work.  If BA has written a big enough cheque, and if the BA cabin crew can prepare and serve the food properly, DO & CO will deliver.

DO & CO don’t have anything to do with the alcohol selection.  Highlights from the wine list include:

a Tiki Sauvignon Blanc 2016 from Marlborough

The champagne options are:

The new Club World bedding and amenity kits, in partnership with The White Company, have been pushed back until ‘the Autumn’.  Again, this will only be on the JFK route this year.

I look forward to seeing how this beds (sic) in.  More importantly, I am keen to see how many people who have dropped BA for a better seat elsewhere will be tempted to return by improved food.  Especially as I have an invitation on my desk to try out the Qatar Airways Qsuite in two weeks ……