British Airways launched its latest World Sale yesterday with discounts on long-haul and short-haul flights in all classes.

Bookings must be made by 26th September.  Travel dates vary.

One interesting quirk is that First Class is priced at a fixed £400 return above Club World on many North American routes, which will be tempting purely from an Avios and tier points perspective.  This is for departures between 21st November 2017 and 6th August 2018.

Sao Paulo is an interesting deal at £2199 return in Club World, as is Buenos Aires at £2240, given that you rarely see Latin America heavily reduced.  Kingston at £1127 is the cheapest Club World deal, closely followed by Punta Cana.

As usual, the best way to find a good deal is via the BA Low Fare Finder website.  This lets you see the lowest price, on a month by month basis, for any route in any class.   It is one of the most customer friendly bits of BA IT.

Here are some headline prices: 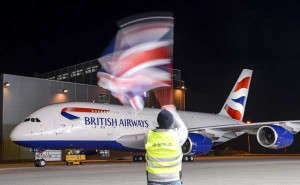 There are many more Club Europe offers – use the Low Fare Finder site to see them quickly.

There are many more European economy offers – use the Low Fare Finder site to see them quickly.

Unlike ‘flight only’, you can secure a BA Holidays package with a deposit as low as £150 per booking, not per person, with the balance only due five weeks before departure.

Remember that it is often cheaper to book a ‘flight and hotel’ or ‘flight and car’ package than just a flight on its own.

The examples below – which are all in economy – were provided by the British Airways press office and are not my recommendations!

New York – three nights at the 3* The Gallivant Times Square, from £469 per person, travelling January 7 – January 31

Barbados – seven nights at the 3* All Seasons Europa/Rostrevor, from £529 per person, travelling April 23 to June 29

Nice – two nights at the 3* Comfort Suites Cannes Mandelieu, from £99 per person, travelling November 1 to February 28

Dubai – three nights at the 3* Hilton Garden Inn Dubai Al Muraqabat, from £399 per person, travelling May 1 to May 31

Hong Kong – four nights at the 3* Best Western Plus Hotel, Hong Kong, from £509 per person, travelling January 2 to February 15

If you are looking for a Club World holiday deal, you will find those here.

With both short-haul and long-haul, and all travel classes from economy to First, included in the sale – plus BA Holidays – it is impossible to pick out everything.

The best thing to do is to visit the sale page of ba.com here or the BA Holidays home page here and have a play around.  You might find something you like.

You must book by 26th September.  Travel dates vary by class and route.