BA has begun to promote its onboard wi-fi service, now known as .air.   It has been quietly available on certain aircraft for some time although the crew does not always mention it.

Only four Boeing 747 aircraft are currently equipped.  The registration numbers are G-CIVR, G-CIVS, G-CIVV and G-CIVX.  The first short-haul aircraft with wi-fi will not be available until June 2018.

Visa (BA’s North American credit card partner) has agreed to underwrite a launch promotion.  You will receive one hour of free connectivity (normally £4.99) courtesy of Visa until the end of January.  It is not clear if you will need to sign up and register a Visa credit card in order to get this or not.

The bad news is that the feedback I have seen on Flyertalk from users is poor – “highly spotty and slow”, “far from a smooth experience”, “really slow”.

(EDIT: as per the comments, some earlier comments – before the service was publicised – are more positive but those from the last couple of weeks are not.)

This is bizarre because British Airways is, in theory, one of the first users of ‘second generation’ in-air wi-fi technology which is meant to be far superior to the – generally poor, in my experience – speeds offered by airlines who adopted the technology earlier.

The two levels of service have been renamed since the first trials.  ‘Connect Plus’ – peak speeds of 20 Mbps in theory – is now called ‘stream’ and costs:

If you want to do simple browsing, you need ‘browse’:

Note that voice and video calls are banned under the terms of service and cabin crew have been told to enforce this.  The service will also not work when passing over India due to local restrictions.  Apart from India, the service will work whenever the aircraft is above 10,000 feet.

When airberlin went into liquidation, Lufthansa picked up most of the pieces for its low-cost Eurowings subsidiary.  This included the most attractive long-haul airberlin routes.

Whilst airberlin was very much a low-cost operator on short haul, the long haul operation had a perfectly acceptable, fully flat, business class cabin.  airberlin long-haul was one of the best Avios bargains because there were no fuel surcharges – a business class return on points to the United States would only have £75 of extras on top.

Eurowings has now decided to add a Business Class cabin to some of its long haul aircraft.  These are expected to focus on the higher-yielding routes out of Dusseldorf such as New York – which Lufthansa is temporarily operating until the Spring – and Miami.

The cabin, to be branded BIZclass, will look very familiar to anyone who has flown Lufthansa Business Class.  As the grainy image below shows – it was taken from a tweet and is the only image released – you have a V-shaped middle pair where you get to play footsie with your neighbour, whilst the seats on either side are a more conventional format.  It isn’t clear if the cabin will be just three rows deep as the picture implies.

These seats will be bookable using Lufthansa Miles & More miles.  United Airlines, ANA and Air Canada members should also be able to book them due to the partnerships those airlines have with Lufthansa, but they will not be generally bookable via other Star Alliance airlines.

As Eurowings is not a Star Alliance member, despite its Lufthansa parentage, you can only earn miles with Lufthansa, Air Canada, ANA and United when flying.  Only Miles & More elite members receive any sort of status benefits. 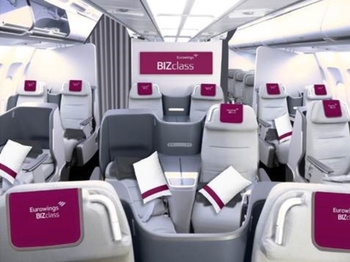 Don’t forget that today (Sunday) is the last day to book long-haul Avios redemptions at 50% off!

Full details are in this HFP article.  In summary:

You must book by 17th December

You must travel between 4th January and 30th June 2018

And also note:  “Reward flights are strictly subject to availability which may be very limited or not available at all on some routes including Sydney, Santiago de Chile, Sao Paulo, Rio de Janeiro, Buenos Aires, San Jose (Costa Rica) and Grenada.”

This page of ba.com has all of the small print and should be your first stop.