The Virgin Atlantic Winter sale is now on as you can see here.

The best deals, however, are out of Dublin.  There are some exceptional prices available at the moment if you don’t mind heading out to Ireland to start your trip.  The connection to London will be on Aer Lingus or British Airways – BA is better as you book into Club Europe.

How about £1,116 in Upper Class to Seattle?  Or Los Angeles?  Or New York?  Or San Francisco?  Or indeed anywhere else on the Virgin US network?

You need to stay away for at least a week to get these prices which will be a problem for some.  The good news is that these fares are bookable for all of 2018 although they are harder to find over the Summer.

You need to book these fares on Expedia or Opodo.  They are NOT bookable on the Virgin website because it does not accept Dublin as a starting point, although you can call them.

Here is an example for Seattle in February.  The fare is £1,116 return using BA Club Europe from Dublin to London and the Virgin Atlantic Upper Class to Seattle.  Click to enlarge: 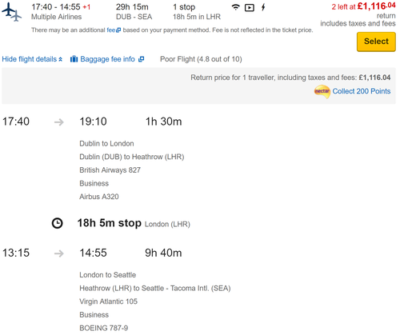 and here is an example to Los Angeles in March for a paltry £1,160: 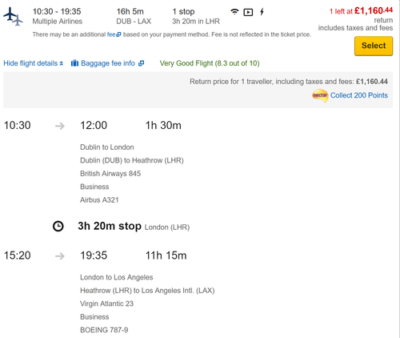 These are very good fares indeed and well worth thinking about over Christmas.  Remember that a seven day minimum stay is required and that you may need to play around for a while to find available dates.

Take a look at the UK sale too

The Virgin Atlantic winter sale for flights starting in the UK is also now underway.  You can take a look at the deals on the Virgin site here.

Starting today (Saturday) Virgin is making some improvements to the travel dates for the cheapest Upper Class fares, although they are still a bit rubbish.

I wanted to focus on the Upper Class options.  The headline prices are not bad, assuming you don’t want to fly via Dublin:

This sale comes with the most bizarre travel restrictions.  Originally, except for Orlando, the US prices above are ONLY valid for travel between 26th May and 2nd June!  Yes, just one week, which was laughable.  This is changing today:

This is still not a major improvement, except for Manchester to Boston, but it is better than it was.

The Dubai Upper Class deals are only valid for travel in June.

For Orlando and the Caribbean the travel dates are a lot wider as you can see here.

Meanwhile, in Premium Economy, there is a totally different but equally restrictive set of dates.  In general, the US routes are only available at the lowest advertised price between 4th January and 8th February.

It is still worth having a look at what is available, but be aware that the lowest advertised prices are thin on the ground.  Economy deals are not bad, with London to Boston now starting at £308.   The sale home page is here.

This is not hugely surprising.  Etihad recently scrapped its chauffeur service outside Abu Dhabi as we wrote here.  Virgin Atlantic has never offered the service on Flying Club tickets.  Only Emirates is – for now – continuing with a free chauffeur service at both ends of your trip, irrespective of the price paid (cash or miles) for your ticket.

Here is the official announcement:

We need to let you know about some changes we’re making to our Upper Class ground transportation offering.

From 24 January 2018 we’ll be making the following changes:

We will no longer offer complimentary ground transportation, including chauffeur cars, as part of an I class ticket. This includes Heathrow Express, Limo Bike and all other options, including those in our overseas markets.

Customers booked in I class who would like a chauffeur car transfer will instead have the option of booking one at a preferential Virgin Atlantic rate from our partner Addison Lee.

We are also extending the ability to add on a chauffeur car, at the Virgin Atlantic preferential rate, to Z class bookings globally.

I think Virgin Atlantic had a couple of issues here.

Firstly, unlike Emirates or Etihad, 50% of its trips would have been in the UK with the expensive petrol and labour costs that entails.

Secondly, it had a generous incremental policy that let you stack your free mileage – a couple got double the standard free mileage, a family of four got 4x.  In theory, a family of four could get a free return Mercedes trip from Newcastle to Heathrow and I doubt that was cost effective on cheap discounted tickets.