Bloomberg reported on Friday that British Airways is in negotiations with Airbus to order an additional tranche of A380 aircraft.

There could be some truth in this.  IAG has said that it would be willing to buy 6-7 second hand A380 aircraft, and there are a lot of them on the market.  Emirates and Singapore Airlines have started to retire their earliest aircraft and Malaysia Airlines was, at one point, trying to offload theirs too.

Apart from engine issues (BA is only likely to want A380 aircraft with engines which match the existing Rolls-Royce fleet), the earliest A380 aircraft were substantially heavier than promised.  Whilst there is always a price that would make a deal work, the desperation for orders at Airbus means that getting new aircraft at a big discount may be a better choice 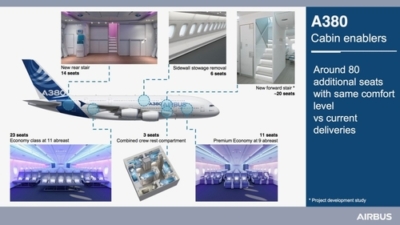 As you can see from the slide above, there is the potential to add an extra 78 seats for airlines who are willing to remove the main staircase and, by raising the level of the upper deck, move to 11 across in Economy in a 3-5-3 configuration.  The seat width remains the same due to narrower aisles and the removal of at-window storage.  The Airbus website explains in more detail how this would be done.

John Leahy from Airbus told Bloomberg Television last week, according to the article linked to above, that he expected a European airline to confirm an A380 order this year.  British Airways is believed to be the carrier.

The Emirates order for 36 new A380 aircraft placed last week means that the aircraft will continue to be built for at least another decade, giving BA more confidence if it does move forward.