As regular Head for Points readers will know, HMRC removed the ability to pay self-assessment, PAYE or VAT with a personal credit card last weekend.

This was a big blow for miles and points collectors, as the exceptionally low HMRC credit card fee of 0.38% meant that you could pick up points very cheaply.

But if that’s the case, how do I explain this pending charge from my Lufthansa Miles & More Visa statement, dated yesterday?

£1750 paid towards my self-assessment bill and with no fee at all.

The answer is the new FREE consumer version of the Curve Card.

As I wrote last week, Curve Card, the payment card that allows you to merge all of your Mastercard and Visa cards into one product, is now available to the general public.  It had previously been available only to anyone who had self-employed income.

Financially there are two reasons to use Curve:

You can withdraw £200 of cash per month from an ATM and have it charged to your credit card as a purchase – this means it earns miles and points.

Foreign currency transactions made on Curve are recharged to your linked Visa or Mastercard in Sterling with a 1% foreign exchange adjustment.  This makes it a better deal than using the underlying card which is likely to have a 3% FX fee.

There will, soon, be a rewards scheme of some sort

There are more practical features too, such as the ability to export your spending data for analysis and the ability to lock the card from your phone.  As Curve is contactless, it is also a way of making any non-contactless Visa or Mastercard you have into a contactless one.

Here’s the key thing though ….

The Curve Card is now being issued as a debit Mastercard and not a pre-paid business Mastercard.

I lost my original Curve Card late last year when I managed to lose my wallet.  It was reissued last week as one of the first debit versions – you will know this because it has the word ‘debit’ on the front: 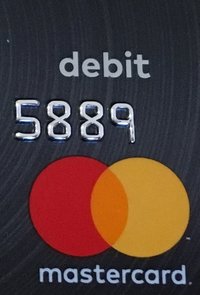 I wondered what would happen if I used it as a debit card to pay my tax bill.  The answer is that it works just fine.

I paid £1750 to HMRC using my Curve Card as a debit Mastercard.  As you can see from the image above, the charge was passed through to my Miles & More Visa credit card as you would expect.

I will earn Lufthansa miles from the charge to my MBNA credit card.  I paid no fee to HMRC.

This is a fantastic result.  Now, there are limits to how much you can charge to a Curve Card.  My current limit is £15,000 per month (and £5,000 on a single day).  If you are a new Curve cardholder, your limit will start off lower but will increase over time.  It should be enough for small scale taxpayers to cover their bills, although if you have VAT, PAYE and self-assessment to pay – as I do – it will require payments to be spread out across the months.

How to order a Curve Card

The Curve Card is FREE so there is no harm in trying it out.

(Even if you don’t have HMRC bills to pay, it is worth having for the ability to charge a £200 ATM withdrawal each month to your credit card and the 1% FX fee on foreign transactions.)

The Curve website is here if you want to know more.  You need to download the Curve app for your phone and order a card from there if you want to try it out.  Whilst there is in theory a waiting list they seem to be prioritising new applications.

If you use a refer-a-friend code when you sign up – my code is OQB4J – you will receive £5 off your first transaction with the card.

If you have self-employed income, you are better off getting the corporate version which is also free, as this comes with cashback rewards.  You can see full details under the ‘Accountants / Business’ tab on the Curve website.  If you use a refer-a-friend code when you sign up for the small business version – my code is OQB4J – you will receive 500 Curve Rewards points (worth £5 off any transaction) when you first use your card.

There is just one caveat if you apply for the corporate version of Curve.  My replacement Curve card which I got last week – which is the corporate version – is a debit card.  Some people are receiving the older pre-paid version.  If, when your card arrives, it does not have the word ‘debit’ printed above the Mastercard logo, contact Curve via the app and ask to be switched.  You will get a new card within a few days.

If you have one of the earlier corporate versions issued as a pre-paid business Mastercard, you may want to enquire about switching to a debit version.  This will also make it easier to use at establishments which had issues with the old card because it was coded as a pre-paid card.