South African Airways has announced plans to upgrade their London – Johannesburg route to a brand new A330-300 from 25th March 2018.

To quote from the press release:

“We have decided to upgrade the service operating between Johannesburg and London Heathrow to the new Airbus A330-300 with effect from Sunday, 25 March 2018. This will afford customers a significantly improved on-board Business and Economy product, with state-of-the-art technology, increased comfort and capacity,” SAA CEO, Vuyani Jarana.

This is the new seat map (click to enlarge). 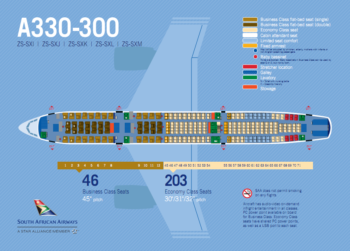 The new business class looks promising with 46 ‘all aisle access’ lie-flat seats in a staggered 1-2-1 configuration. In comparison the current A 330-200 has only 36 business seats. 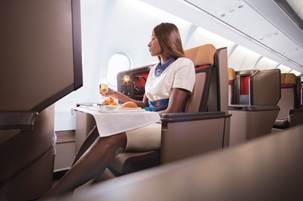 Every seat comes with a 15″ touchscreen and customers are also able to download further entertainment onto their own devices via a new app prior to the flight. 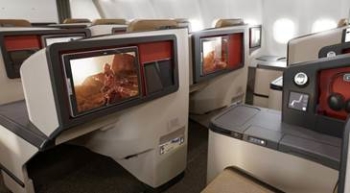 That is the good news.

The downside, of course, is that SAA currently has two daily flights out of Heathrow (18:05 and 21:05).  From 20th April there will be one daily flight at 19:00.   The drop in capacity is likely to see fares rise even more (Johannesburg and Cape Town are rarely reduced, even in a British Airways or SAA sale).  As South Africa is an overnight flight in both directions with virtually no jet lag, it is not a great idea to save money by changing in the Middle East in the early hours.

South African has had well publicised financial difficulties recently.  The bigger problem with flights to Europe is flight times.

There are two issues here:

Given these factors it would be amazing if South African could make any European flight profitable.

We are hoping to review the new A330-300 when it launches later in the Spring.