We ran an article last week about the return to service of G-MEDN, the first British Airways A321 aircraft to be ‘densified’ with additional seating.  This was primarily due to the two loos being moved into the back wall of the aircraft.

The other change was meant to be the introduction of super-thin Recaro seating in two thirds of the aircraft, from row 12 or row 14 depending on aircraft type.

And yet, in an article published late on Friday night, British Airways spoke to Business Traveller to refute this.

This is a summary of what British Airways said:

The new A320neo and A321neo aircraft, to be delivered from April, WILL have a mix of the current and super-thin seating

However, the existing A320 and A321 fleet is not changing.  All seats will be the current (‘Pinnacle’) seat, albeit reworked to include USB and power sockets.

This creates as many questions as it answers.  This is what British Airways told the City:

How can British Airways have the same numbers of seats on an A321 with the current seating and the forthcoming A321neo aircraft with super-thin seating?  Has the seat pitch been reduced even though the seats are the same?

Here is the only picture I have seen so far of the new BA ‘spaceflex’ cabin on G-MEDN.  It doesn’t help much as it is taken from the front where the seats would be the same anyway: 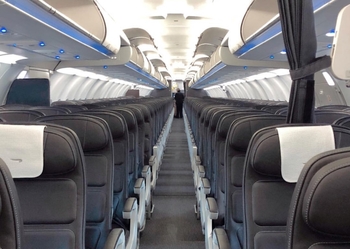 To make things even more confusing, Iberia is definitely retro-fitting its super-thin seats onto its existing Airbus aircraft as well as on its new deliveries.  The article does not, admittedly, imply that BA was planning a retro-fit.

It is all a bit odd.  It is even odder than BA is telling Business Traveller that ourselves, Flyertalk, PPrune and various other sites have been printing incorrect information, when they could have contacted all of us directly.  If we have been sharing incorrect information about the new seats then, BA, we’re sorry ….. but you could just have rung us or even invited the media on the Glasgow flight on Thursday.   It probably didn’t help that the entire travel press, including ourselves, was in Berlin last week for the ITB trade show.

It seems that we may end up with two types of Airbus short-haul planes at Heathrow.  New neo ones with a mix of current and super-thin seats, and the older Airbus aircraft which just have the current seats.  All with have the new thin toilets built into the back wall.  Confusing …. and unhelpful if you want to avoid the new Recaro seats.