On 3rd March I wrote about a competition Hilton was running on Facebook which was exclusive to Amex Platinum cardholders.   The article generated a lot of comments because the entry form was so scruffy that a lot of people thought it was a scam until I got hold of the original ad.

The entry criteria were so restrictive that I was pretty sure a HfP reader would win – and I was right.  The prize was a sleepover at the McLaren Technology Centre in a Hilton Hotels & Resorts bed and viewing of the Australian grand prix. 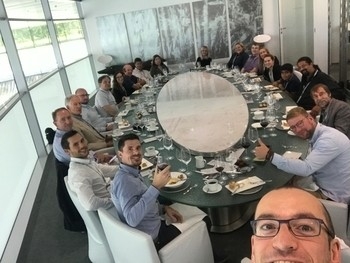 That’s the good news.  The bad news is that the winner wanted to bring his 9-year old nephew.  Amex / Hilton refused – even though there was no age restriction in the rules, except that the entrant had to be over 18 – because there would be “alcohol branding” on display.  No compensation has been offered.

As the father of a 10-year old, that the fact that my daughter may see “alcohol branding” on display at any event we attend has never caused me any overt concern …..

PS.  Above is a photo from the last daytime Hilton tour of the McLaren Technology Centre, where 80% of the guests were HfP readers.  Note the children in the picture.

PPS.  As per the comments below, the replacement winner is also a HfP reader.