This is my review of the new(ish) INNSIDE Hamburg Hafen from Melia.

INNSIDE is the four-star chain of business focused hotels run by Melia.  Long-term Head for Points readers might remember my review of the new INNSIDE New York NoMad and Rob also reviewed the INNSIDE Manchester when it opened.

We do quite a bit with Melia Hotels International as you may know.  They have hosted our Christmas Party for the last two years and provided generous raffle prizes each time.  Their hotels have also become a lot more relevant to readers since they began to offer Avios on every stay and American Express Platinum began to offer Gold status in Melia Rewards. 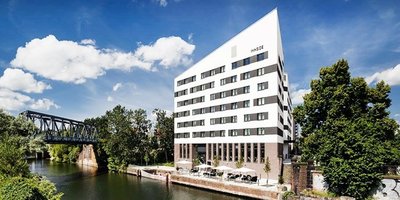 I enjoyed my three day stay in New York.  The INNSIDE Hamburg Hafen has now been open for almost a year but even though I spend quite a lot of time in Hamburg with my family, I never had a chance to take a look before.  This Easter I was at home and for the last night of my stay I checked in at the INNSIDE before heading out to the airport.

Melia provided me with a free room and breakfast.  Click on any of the pictures (except the first one, which is a stock photo) to enlarge.

I got the train to Hamburg Hauptbahnhof (central station) and decided to take a taxi as my suitcase was a bit heavy. With only hand luggage it would have been a 15 minute walk, with suitcase it was a €7.70 taxi ride. Note that on the way back the taxi ride is a bit more than €10 as the road outside the hotel is a one way road and the car needs to go the opposite direction for a while before turning around.

The INNSIDE Hamburg Hafen is near Deichtorhallen, where you find contemporary art and photography collections. It’s also close to the Hafencity and a 15 minutes walk to the two main shopping streets. It’s worth mentioning that Hamburg has fantastic public transport and a bus-stop is right outside the hotel.

The reception desk is right in front of the entrance doors. There was one receptionist and two check-in laptops. I was later told that the project ‘tablet check in’ had failed and the tablets were to be removed in the near future.

I checked in and took one of the elevators which are located to the left of reception. 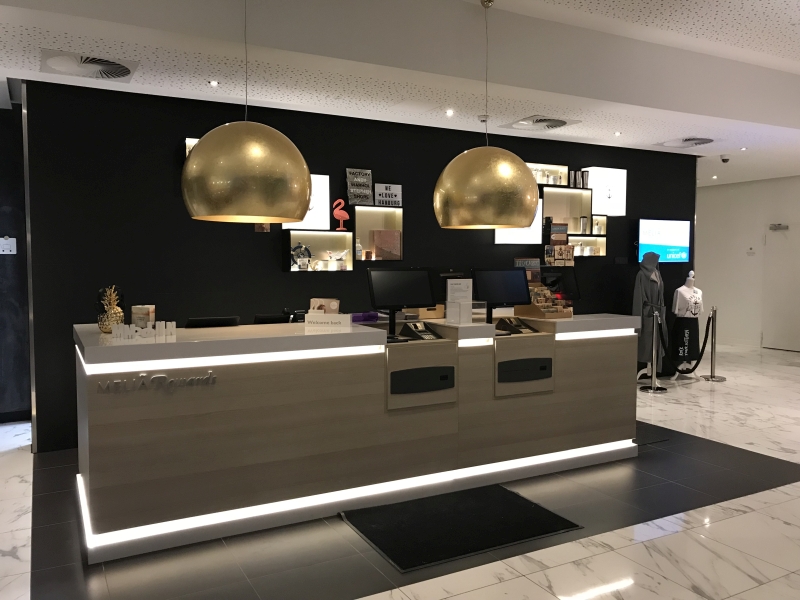 I stayed in an INNSIDE Premium Room which is the second category up.

As you can see in the picture below the design of the room is very much open plan. There is no wall between the sleeping and the bathroom area which looks pretty cool but might be an issue for some.  The toilet is separate and has a proper door.

The area around the sink was big enough for all my toiletries and make-up. Inside the drawer was the hair dryer which was already plugged in. 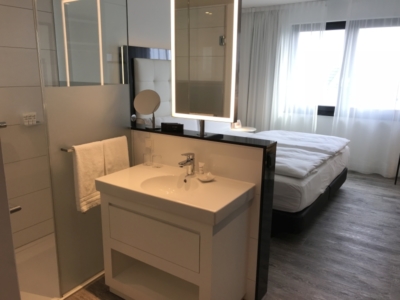 This is the room looking from the window. I was told that some rooms have a different layout and therefore a separate bathroom.  If the open plan design isn’t for you, you could ask for one of the other rooms when booking. 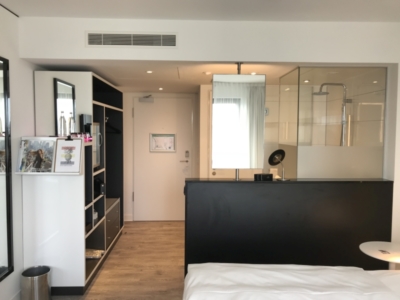 This was the view from my window. As the windows were triple glazed, I couldn’t hear the cars outside and the train tracks don’t seem to be in use at the moment. 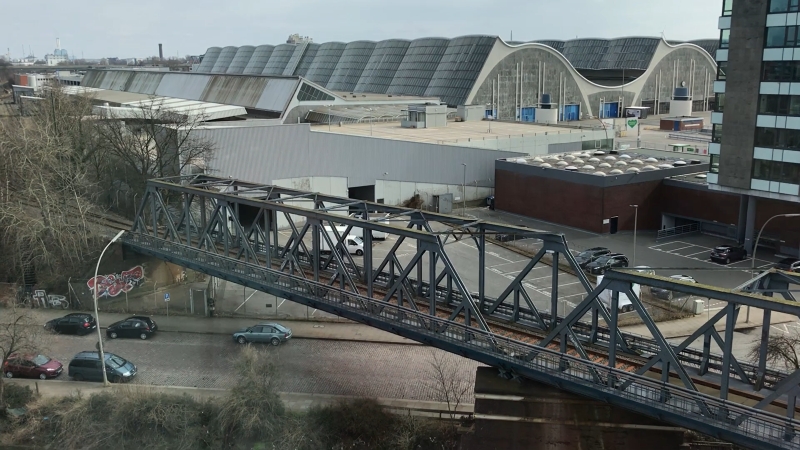 The bed was a king size bed with one mattress – they are often made of two in quite a few hotels in Germany. The duvets on the other hand were two single duvets. 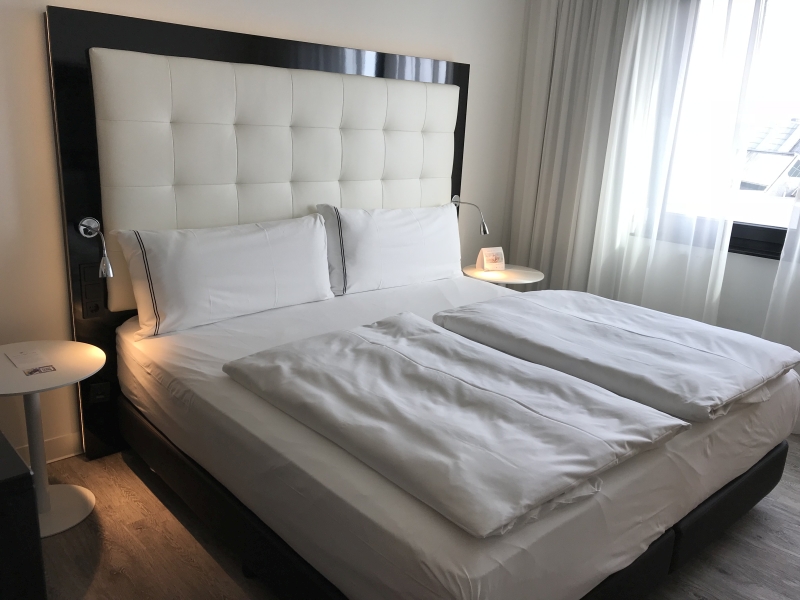 The open wardrobe was a similar design to the one in INNSIDE New York but a little bit bigger.

The complimentary mini bar which is refilled daily had a regular coke, a coke light, two different juices, sparking and still water as well as a bag of popcorn and one of my favourite beers, Astra.  There was also a large bottle of sparkling water.

If I remember correctly there were about 10 Nespresso capsules as well as tea capsules which you can use in the Nespresso machine. 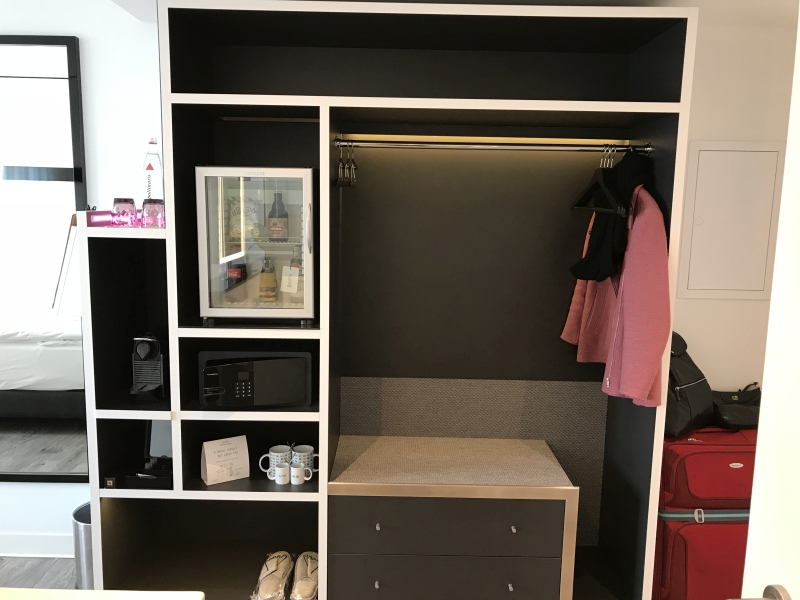 The desk was a little bit bigger than at the INNSIDE New York, but if you have an 15′ laptop you might still have to use the ground floor area to work.

As it was Easter Monday there was an Easter Bunny and some chocolates and cookies waiting for me on the table!

Wifi was free and available throughout the hotel.  The majority of TV channels were in German but there were also a few English news channels. 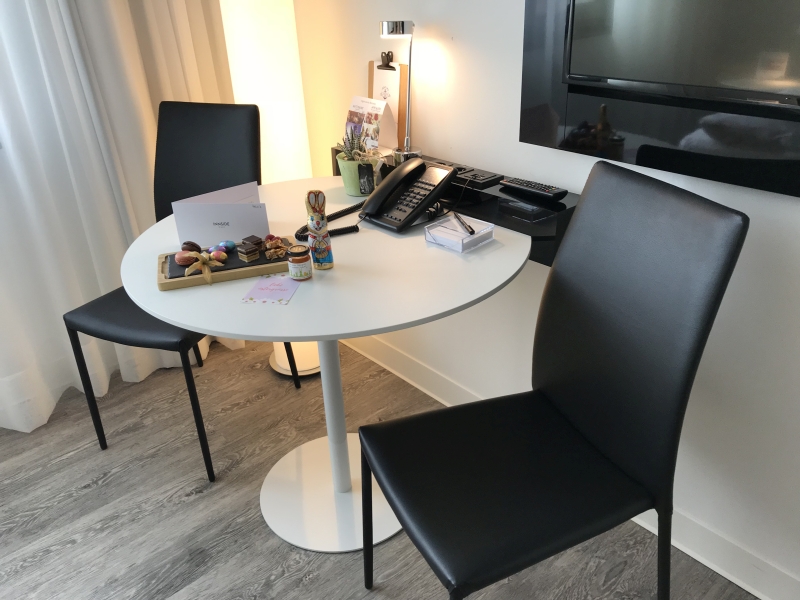 I’ve started to have a thing for walk in showers. I would even choose them over a bathtub. There was a rainfall shower as well as a handheld shower head. 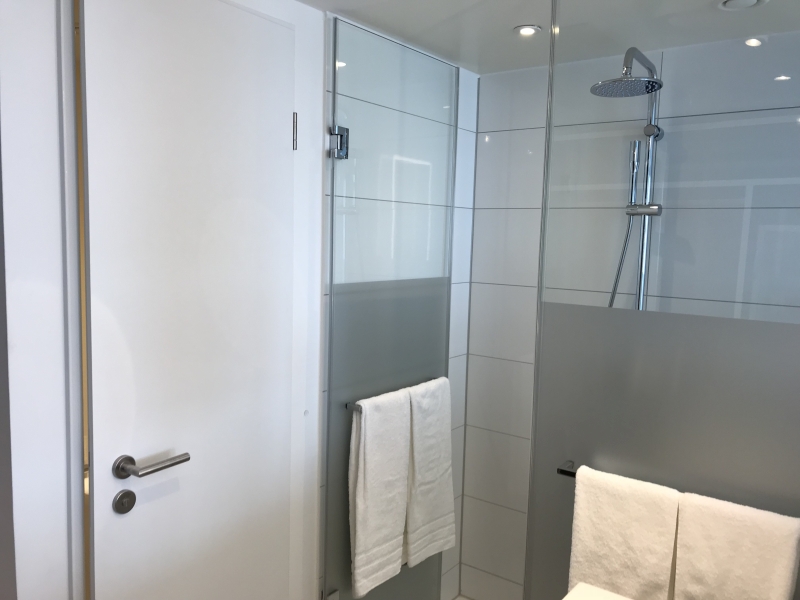 Shampoo, conditioner and shower gel were the same I had in New York, which I really liked, with the only difference that they were not attached to the wall – so I could take the bottles home.

I was shown a couple of other rooms. The room below is one of the Lifestyle Suites which have a separate living room with a sleeper sofa which means it can accommodate a family with two kids. 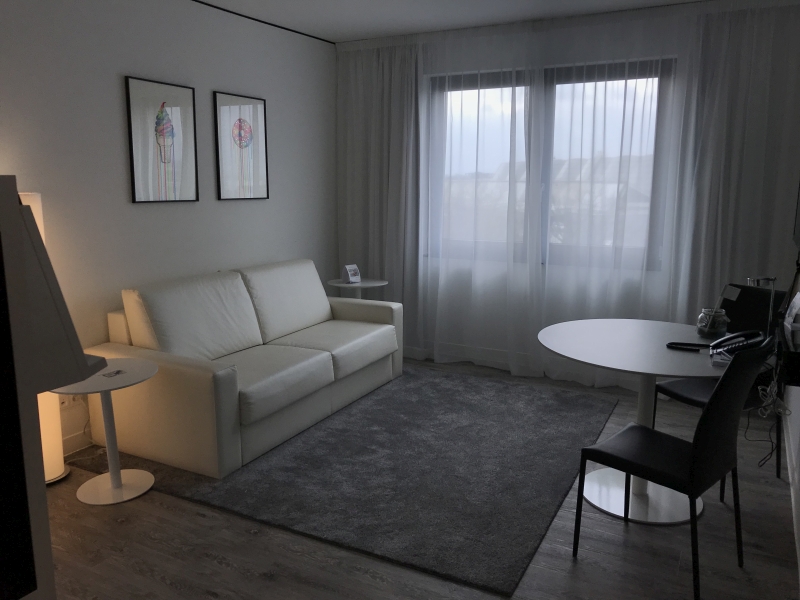 The hotel also has a presidential suite with a fun circular layout. You can walk from the living room into the bedroom, continue to the bathroom and will eventually get back to the front door.

The breakfast buffet is served on the ground floor. I had breakfast included, whilst a friend joined me in the morning and paid €16.  It was a bit difficult to take pictures as the breakfast room was very busy.  As you can see on the picture below there was a bit of a market flair. 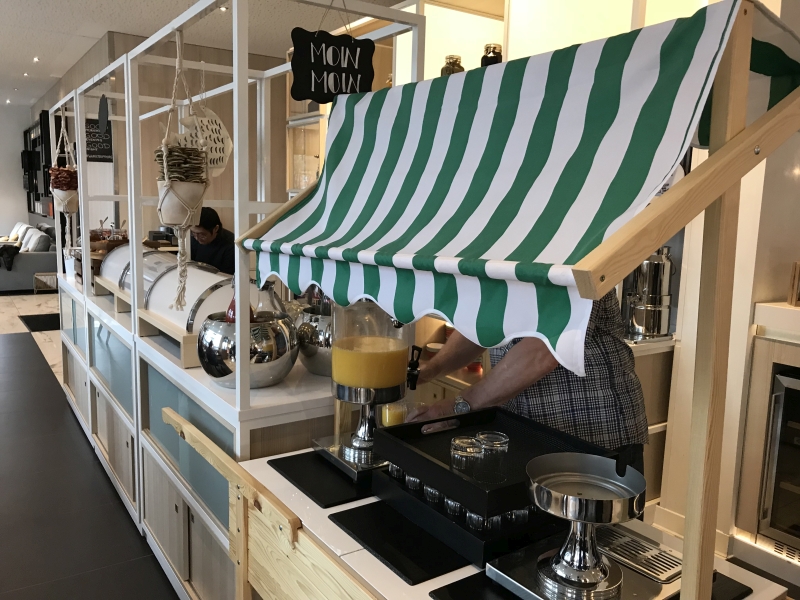 There was a large selection of breads, pastries, cheeses, cold cuts and my favourite: fleischsalat (bologna with pickles and mayonaise). 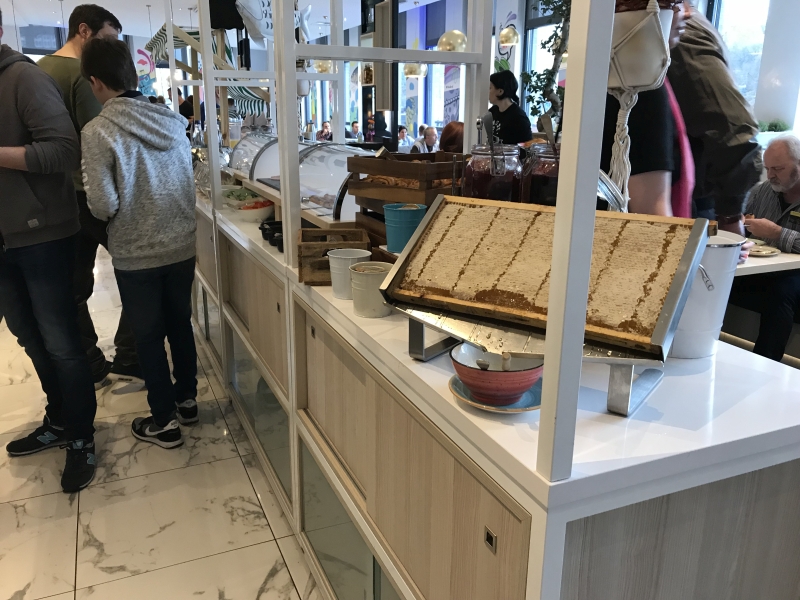 The coffee machine had two different beans for espresso or coffee and made a great macchiato as my friend told me. I had filter coffee which was already on our table when we arrived. There were also hot breakfast options which I didn’t try. 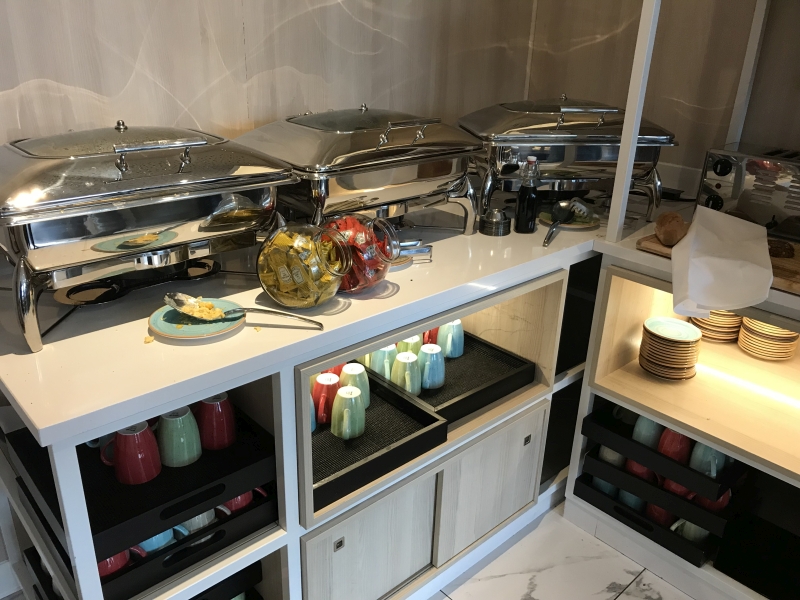 One thing I loved about the INNSIDE Hamburg, and it’s possible that this was due to the fact that I was born and raised in Hamburg, is that the hotel made sure you knew where you were. The complimentary minibar had an Astra (Hamburg’s best beer!) waiting for me, there were anchors everywhere, the dishes on the room service menu had names typical for Hamburg and so on.

Outside the bathrooms on the lower ground was this painting which pretty much sums up the city: 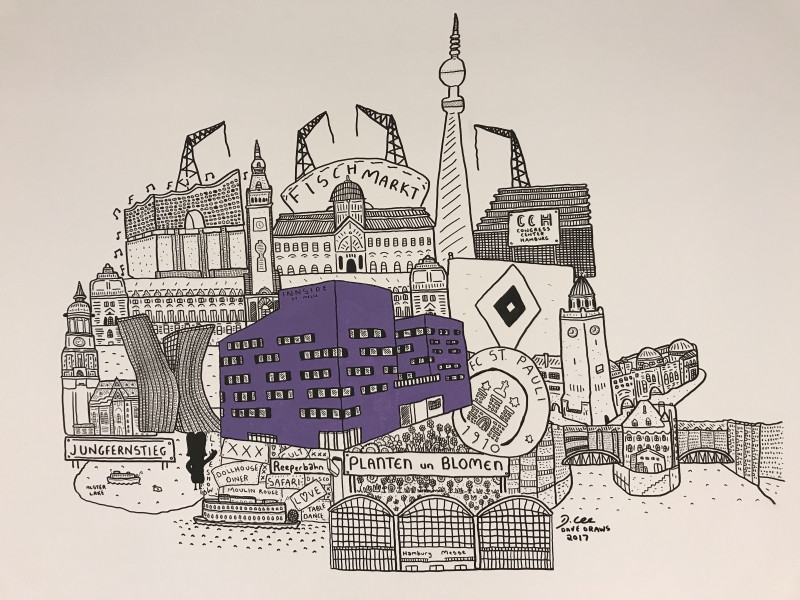 The gym was very spacious and bright with a good amount of machines. There was also a separate smaller room with treadmills and a TV which had a selection of exersise videos. 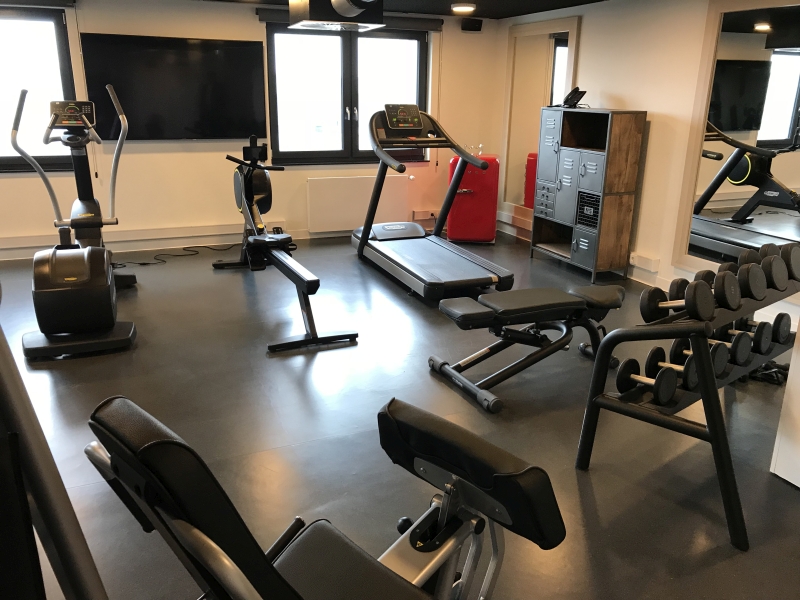 One thing I wish I had known about in advance was the sauna and relaxation area next to the gym as I would’ve brought my swimsuit ….

Typical for INNSIDE hotels are the colourful and fun meeting rooms. Think about it as WeWork with an even more colourful interior: 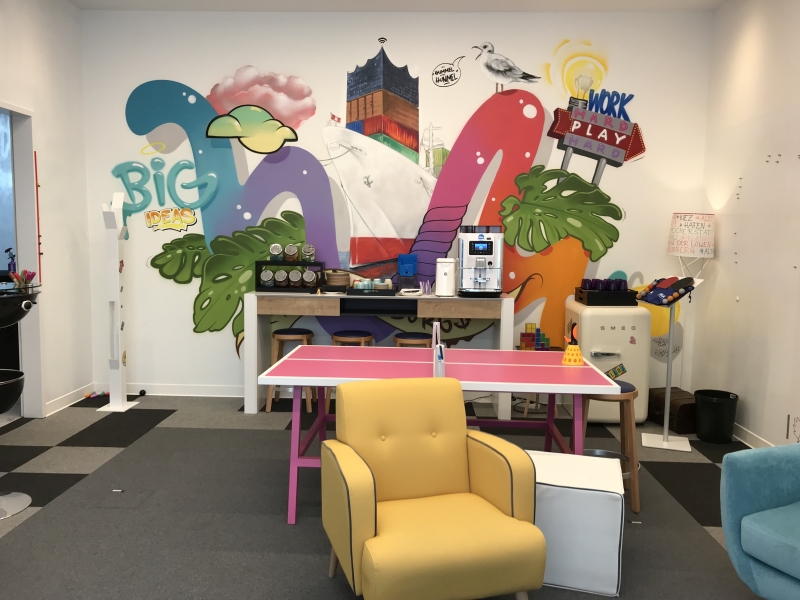 The groundfloor is the heart of the hotel where breakfast, lunch and dinner is served and where you can enjoy a cocktail in the evening.  As you can see below the walls are covered in graffiti which all feature bits of Hamburg. 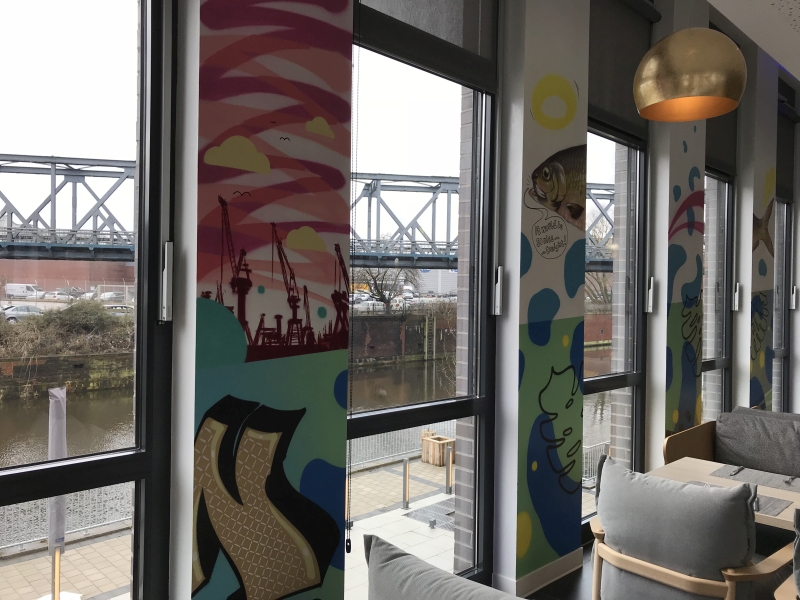 The hotel also has an outdoor terrace right next to the canal where you can enjoy drinks in the summer.

I had some drinks with two friends in the evening and was a little bit disappointed to not find Astra on the menu.  One of my friends was charged €4 for hot water with a piece of ginger, which I find a little bit overpriced. 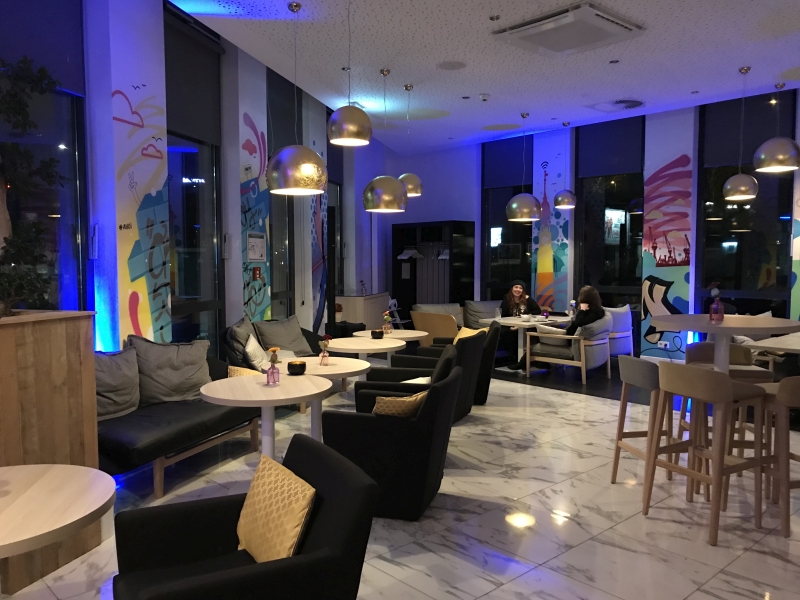 On the upside my other friend who was served a cocktail she didn’t enjoy got a new one and a shot as compensation …..

As always I took some video and edited it into a short clip that hopefully gives a good impression of the INNSIDE Hamburg. You can see it on YouTube channel via this page.

The INNSIDE Hamburg Hafen is a fresh new hotel with good sized rooms in decent location to reach Hamburg’s sights. There is a bus stop right outside the hotel with buses to the central station running every 10 minutes and the U1 is about a 10 minute walk away.

Hotel guests can also hire bikes for €14 per day or €2 per hour which I highly recommend if the weather is great as Hamburg is a great city to explore by bike due to the cycle lanes.

Rooms start at €80 per night.  You can book your stay here.

How to get MeliaRewards Gold status from American Express (December 2022)

Do you know that holders of The Platinum Card from American Express receive FREE MeliaRewards Gold status for as long as they hold the card?  It also comes with Marriott Bonvoy Gold, Hilton Honors Gold and Radisson Rewards Premium status.