I was in Cardiff yesterday to watch the First Minister of Wales and the Qatar Airways Group Chief Executive inaugurate the new service from Cardiff to Doha.  It is currently operating five days per week but will increase to daily from June.

All services will use a new Boeing 787 in a 22 Business / 232 Economy configuration. 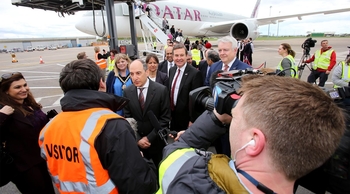 The Qatar Airways CEO gave another of his famously unscripted speeches.  One of his plans is to build a five-star hotel in Cardiff – there are no five-star hotels at present – as part of the airline’s nascent hotel arm.  This would, as he said clearly, be dependent on ‘support’ from the First Minister.

The most interesting item of note was the stated wish to launch services from Belfast as the next UK departure point.  Given that the airline is about to start flying to Malaga, Luxembourg, Valletta, Antalya and Tallinn, Belfast doesn’t seem that crazy.