If you wanted to save money – a lot of money – on British Airways Club World (or any other airline) tickets by starting outside the UK then there was one piece of free software which was essential.

What is ITA Matrix?

ITA Matrix was hugely powerful because you could search from multiple departure points at once.

Let’s imagine you wanted to fly to New York.  You could type in:

…. as your Departure City, and then New York as your Destination City.

ITA Matrix would search for flights on BA from ALL of these starting points, covering most of Europe.  In one click you could track down countries where British Airways was quietly knocking out tickets on the cheap. 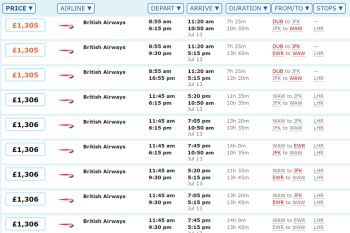 A recent IT change – which is not an error, it is strategic – has made ITA Matrix virtually useless for our purposes.

You cannot now search for fares from different departure countries in one search.

You CAN still search for prices from multiple airports in the same country.  Using

…. as your departure point would search for flights leaving from major UK airports.  This is nowhere near as useful, however, especially for BA flights when the best deals will usually be in mainland Europe.

(If you have never used ITA Matrix and the coding above looks like nonsense, take a look at this HFP article which explains how it works.  Or, more accurately, how it used to work.)

There is no other website or piece of software which has the same functionality.  Google Flights has a five city limit.

You could never book flights via ITA Matrix.  All it did was scour the airline systems for the prices.  You had to plug the exact times and dates into Expedia or an airline website in order to book.  With no revenue stream, there was little incentive to keep it going as it was.  The reason Google bought it was to get hold of the team, which was set to work beefing up Google Flights.

This is very annoying …..