To give Willie Walsh and the rest of the IAG management team some credit, they don’t mess around when they want to get something done.

IAG, the parent company of British Airways, announced yesterday that it is launching a new airline based in Austria.  In three weeks time.

The new airline will NOT use the Vueling branding, which is interesting.  I wonder if the huge service issues that Vueling has had in the last couple of years – primarily when Alex Cruz was running it ….. – mean that IAG feels that the brand is ‘tainted’?

The new airline will be called LEVEL.  This is, as most of you will know, the name of the start-up low-cost long-haul airline owned by IAG.  This currently operates out of Barcelona with Paris due to start imminently.

Why is IAG doing this?

You may remember that IAG was keen to buy Austrian carrier NIKI from the ashes of airberlin.  That deal fell through and Niki Lauda ended up buying back the carrier with financial support from Ryanair.

As it happens, Vueling actually had an Austrian operating certificate issued in the name of Anisec Lufthart.  This enabled it to launch LEVEL in Austria very quickly.  Legally, the low-cost LEVEL flights will be part of Vueling. 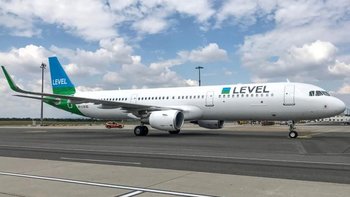 LEVEL will fly to fourteen destinations from Vienna.

It will initially use four A321 aircraft, in an all-economy 210 seat layout.  The first one, ironically, is an ex-airberlin / NIKI plane!

The first two, launching on 17th July, will be Palma Majorca and London Gatwick.

Lead-in prices will include one item of hand baggage.

Checked baggage and in-flight food and drink will be chargeable.

Flights can be bought at flylevel.com.  If you are looking for a cheap trip to Vienna this Summer and can get to Gatwick, you might get a good deal here.

I’m intrigued to see how this works out, and even more intrigued as to how the separation between Vueling and LEVEL will work.