If you took part in what was (effectively) Iberia’s “buy 90,000 Avios for £200” promotion two weeks ago, you should now have 90,000 Avios sitting in your Iberia Plus account.

Now comes the snag.  Despite what Iberia told me and other frequent flyer writers, you cannot transfer these Avios to British Airways Executive Club.  After the promotion is over, they have mailed the rules to everyone who took part – which happen to be different to what was told to us.  A lot of people won’t be entirely surprised by this.

I expect this situation to develop and I will return to it when the dust has settled a little.  Is it worth a long fight with Iberia over this?  Probably not.  You can EASILY use these Avios via Iberia Plus for more than twice what you paid for them.  If you can get 1p or more per point via flight redemptions, which is my usual target, you should be getting 4-5x what you paid.  The only things you can’t do, as you can’t move them to BAEC, is combine them with an existing balance at BA (but you can move BA Avios into Iberia to top-up) or use them with a BA American Express 241 or Lloyds Avios Rewards upgrade voucher.

The very worst case – which is actually a pretty good case – is that you redeem for hotel rooms at well over 2x your money.  Here are your options.

How to redeem Avios via Iberia Plus

This article is a long one, so let’s quickly summarise what you need to know:

When booking Iberia flights via Iberia Plus, taxes are lower and availability is better than if you book the same flights via BAEC

BA short-haul flights booked via Iberia Plus do not qualify for Reward Flight Saver, so taxes are likely to be higher

VERY IMPORTANT:  partner flights – except on BA – CANNOT BE CANCELLED OR CHANGED WHEN BOOKED VIA IBERIA PLUS

Redeeming Avios on British Airways via Iberia Plus

To be honest, there is very little to add beyond what I summarised above.  You will see the same British Airways availability as you would on ba.com and the same peak and off-peak dates apply.  You cannot use a BA Amex 241 voucher or a Lloyds Avios Rewards upgrade voucher.

You can book one-way rewards and you can cancel them for a refund if needed.

Your Iberia Plus number will automatically drop into the booking so you will not be able to select a seat for free if you have British Airways Executive Club status.  You will need to call BA or Iberia to change this over.  At one point you could, oddly, use ‘Manage My Booking’ on the Finnair or Qatar Airways sites to switch over frequent flyer numbers on oneworld bookings – I’m not sure if this still works.

If you want to use ‘Avios & Money’ to pay for your BA Avios flights with a combination of Avios and cash, you need to call the Iberia call centre.  You can only use ‘Avios & Money’ online on flights operated by Iberia, Iberia Express, Air Nostrum and Vueling.

Whilst I don’t want to focus on this, you can redeem Avios for Vueling low-cost flights around Europe via Iberia Plus.  This may not be a good deal due to the taxes and charges.

Iberia also has other airline partners that are not part of oneworld, such as Royal Air Maroc for flights to and around Morocco.   Avianca, Binter (Canaries), InterJet and Air Italy are also partners.  I don’t have any experience on redeeming for these airlines, and remember that your booking will be non-refundable and non-changeable.

Redeeming Avios on Iberia via Iberia Plus

When an Avios collector in the UK looks for a long-haul redemption, British Airways is the obvious choice of airline. However, the taxes and charges can often be very high – up to £500 per Club World seat.  Taxes on Iberia flights are often a fraction of those charged by British Airways – although Air Passenger Duty will be added if your connecting flight from the UK is on the same ticket.

Iberia has been through a substantial restructuring since being bought by IAG, the parent company of British Airways.  16 new long-haul aircraft – 8 x A330’s and 8 x A350’s – have been delivered or are on order for delivery by 2021.  The first A350 was delivered just last week.

The Iberia route network used to be, erm, ‘eclectic’.  The good news is that the new destinations being added are places you would actually wants to visit such as Tokyo, Havana and San Francisco.  Avios demand for Iberia’s historical routes to places like Medellin, San Salvador and Managua was probably lower.

These are the non-European Iberia destinations (correct as of January 2018):

All of these are flown from Madrid.  Note that some of the African routes are served with short-haul aircraft.

Iberia has no First Class.  The great news is that, over the last five years, Iberia has installed new fully flat seating across its long-haul fleet: 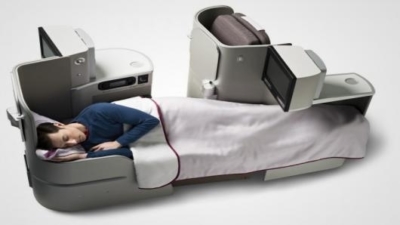 I was lucky enough to fly it on a Madrid to London flight as you can read (and see) here.  Iberia runs a few London to Madrid services a week with long-haul aircraft and flat beds in business class because it needs the cargo capacity offered by the bigger aircraft.

How to price Iberia rewards on Iberia aircraft

Iberia has its own reward pricing chart with its own peak and off-peak dates (click to enlarge): 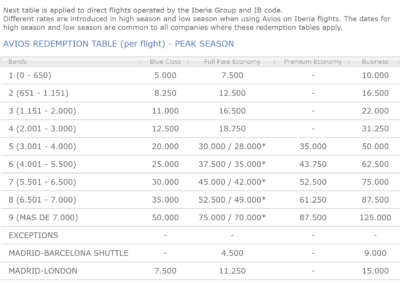 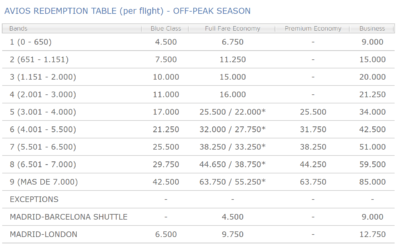 This chart is NOT the same as the British Airways chart: 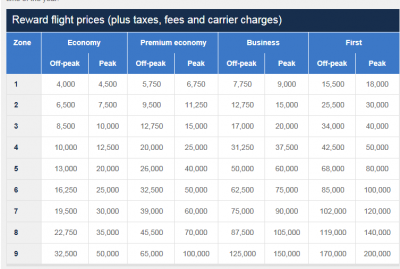 The charts are nearly the same, but not quite.

There are not many destinations which are served by both BA and Iberia so the opportunities for arbitrage are limited.  You also need to factor in the cost and time of getting to Madrid, although if you live outside London it is not massively more complex than changing planes at Heathrow.

I have split this article into two parts due to length.  Part 2 of our guide to redeeming Avios on Iberia Plus is here.