Back in 2015, British Airways Executive Club launched the ‘After Hours Club’.  We thought it was about time we checked it out ….

The ‘After Hours Club’ is a series of social events promoted via The Club magazine, which is BAEC’s online publication.  Whilst promoted by BAEC, the events are arranged by Cedar Communications who oversee the High Life and Business Life in-flight magazines.

It is worth noting that these events are not free – the cost for Anika and myself, including VAT and booking fee, was a reassuringly expensive £130.54 for two.  It puts the £10 ticket cost for the Head for Points Summer Party next week into perspective. 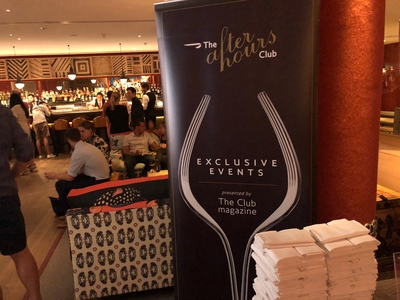 I was intrigued as to what sort of person would pay £65 for a British Airways Executive Club party so we booked ourselves in to the event they ran on Monday night.  As it turns out, Tom and Julian who run Business Traveller (and who are launching a similar series of events) had the same idea.

What you get at an ‘After Hours Club’ party

The event had a Nashville theme to coincide with BA’s new American route.  It was at the Ham Yard hotel in Soho, which is a fairly new and classy property, a sister Firmdale site to The Soho Hotel, The Covent Garden Hotel, The Haymarket Hotel etc.

Ham Yard has a lovely basement with an original 1950’s bowling alley, a large bar and a lot of circulation space.  This is an ‘official’ picture with the lights on! 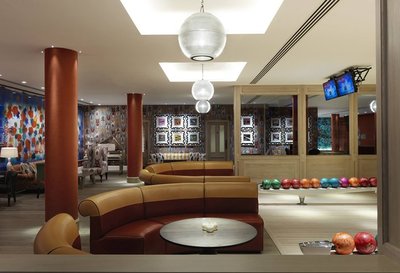 About 75 people turned up.  I was pleasantly impressed by the numbers, given the price tag and the fact it wasn’t promoted so heavily.  There was definitely a skew to an older demographic – guests were more likely to be 55 than 25.

The evening kicked off at 6pm with bourbon-based cocktails.  Given the chunky ticket cost, I was a little surprised to be told that “you will be served a couple of glasses of wine during the evening, and … a paid-for bar will be open for additional and other beverages.”

As it turned out, the cocktails carried on until the huge pre-mixed supply of base elements ran out.  Anika and I got through three each, plus two free glasses of wine (you got a token to exchange for a drink). 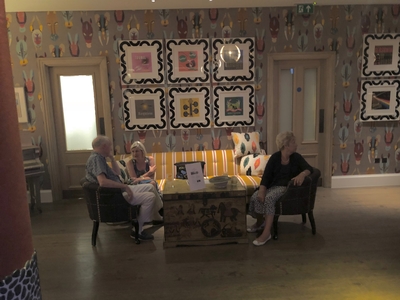 From 7pm, a buffet was also available, consisting of:

This was actually quite good, although we ate whilst bowling so it wasn’t very formal. 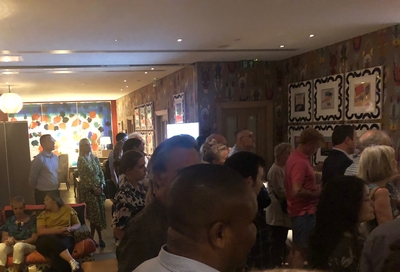 There were three speeches at 7pm – one from the Tennessee Tourist Board, one from the hotel and one from James Hillier himself.

There are some people who believe that James Hillier does not exist 🙂  This is because his name has appeared on BAEC emails since what feels like the dawn of time.  Anika and I can confirm, however, that he is real – although he politely declined a request to pose for a HFP photo shoot – and a very charming bloke.

We just chatted about life and stuff, so anyone hoping for exclusive BAEC gossip will be disappointed. 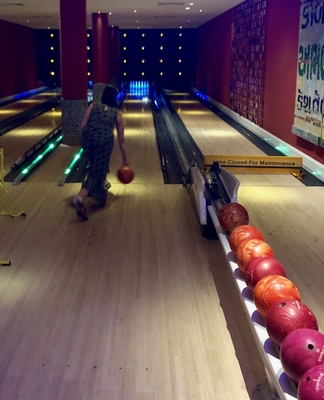 After the speeches it was time for our allocated bowling session.  Three of the six players in our game had disappeared, which meant that we got to play twice per round.  My alter-ego Ray had a terrible game but ‘official Rob’ did better.  We were both trounced by the 3rd player Andrew, we must admit – but Andrew had brought his own bowling shoes with him …..

There was a raffle during the evening to raise money for Flying Start.  The prizes were …. eclectic.  First prize was five nights in a hotel in Nashville, but no flights!  The other prizes were basically Deep South booze-based and most of us were hoping for one of those.

Do I recommend the ‘After Hours Club’?

This is a tricky one.  For a start, a key highlight for us was catching up with James Hillier and the Business Traveller team whereas it is unlikely that a general HfP reader would know anyone else there.

In terms of the quality of the venue, the quality of the food and the drinks on offer – which turned out to be enough without needing to pay for more – yes, it was a good night and well organised.  No-one who went will have any complaints.  That said, the bowling provided much of the fun and not all of these events presumably have an activity attached.

The issue is the £65 per head cost.  To be fair, there are few five-star places in the West End where you can get 3 cocktails, 2 glasses of wine and a decent buffet for a lot less than £65, but it still felt steep.

You could have recouped some by reselling the goodie bag contents, as mine contained a Liberty First Class BA washbag – although Anika only got a White Company Club World one.

If you are price insensitive, however, I do recommend keeping an eye out for the next one via the online ‘The Club’ magazine.