British Airways has announced a new route to Pittsburgh in Pennsylvania.

Pittsburgh will become the 26th (!) US city to be served by British Airways.  It has flown the route in the past but the service was discontinued in 1999.

The route will launch on 2nd April 2019 and will operate four days per week, all year round.

It will operate from Heathrow Terminal 5 and will use a new Boeing 787-8, which means there will not be any First Class seating.

The new flights will run on Tuesday, Wednesday, Friday and Sunday with BA0171 departing from London Heathrow at 5pm and landing into Pittsburgh at 8.15pm.  BA0170 will leave Pittsburgh at 9.50pm, arriving into London at 10.25am the following day. 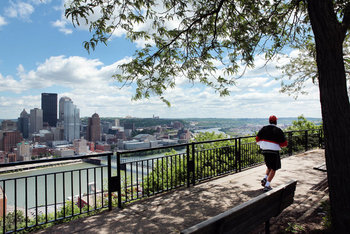 Harper’s Bazaar named Pittsburgh one of the “Best Places to Travel in 2017”.

Visitors can also explore the Carnegie Museums of Art, Natural History and Science, meander around the Botanical Gardens or soak up the lively strip district. Pittsburgh has also been labelled the ‘Best Sports City in the US’, and is home to three professional teams, the Steelers (American football), the Penguins (ice hockey), and the Pirates (baseball). The Steelers became the first team in NFL history to win six Super Bowl titles.

Pittsburgh is the ‘City of Bridges’, with more than any other city in the world at nearly 450.

The area is also home to 90 universities, colleges and career training schools and has one of the fastest growing millennial markets in America.

As usual with new routes, Avios availablity will be excellent.  The route was only opened up for sale yesterday and at a minimum the guaranteed two Club World and four World Traveller seats will be available on each flight.