It is the second review from Jamie’s trip to Indonesia, trying out three different oneworld airlines in Business Class.  The first review in this series, reviewing the British Airways Galleries Club South lounge at Heathrow, is here.  Over to Jamie ….

“The first leg of my journey was an overnight flight in Club World from London Heathrow to Kuala Lumpur.

Rob encouraged me to review this flight because he has flown British Airways so much over the years that he finds it difficult to write about it objectively.  This is why there are surprisingly few BA flight reviews on Head for Points.  Whilst I’ve flown business and first class with various airlines, it had been a few years since I’d flown anything other than economy with British Airways.

I was looking forward to the experience but had read many negative comments about the service.  However, I tried to approach it with an open mind. 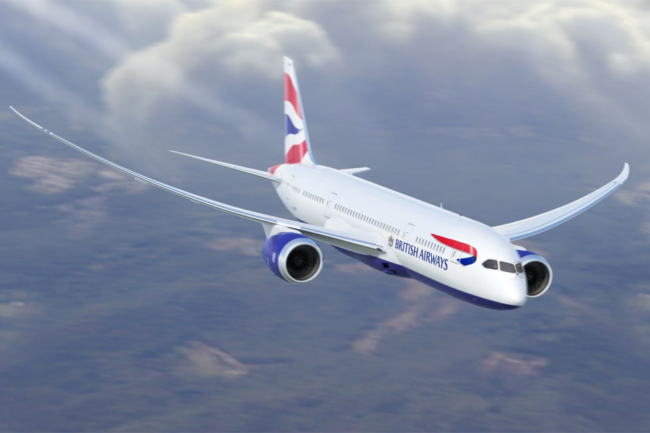 On arrival at Terminal 5 on a Sunday evening there was no queue and check in was straightforward and politely carried out by the desk clerk.  There was also no queue at the fast track security area and I was through in no time.

I spent some time in the British Airways Galleries South lounge (review here), then headed over to the gate when advised. The lady at the lounge reception recommended I allow twenty minutes to get there which I thought was generous, but actually, she was not far off. I was leaving from a C gate and had to get the transit train followed by a bit of a walk, which was about fifteen minutes in total.

There was to be no quick hop from the lounge to the plane for me today but I really shouldn’t expect that at such a large airport terminal.  I could have used the quieter Galleries lounge in Terminal 5B (reviewed by Rob here) but that would have involved two train trips – one to the satellite and then another from 5B to 5C.

Most people had already boarded when I arrived so I walked straight on and was directed towards my seat, 13K.

The plane was a four class Boeing 787-9 with six rows of business class in Club World in a 2-3-2 yin-yang configuration.  In a world where 1-2-1 is the norm, even with BA’s sister airline Iberia, this is never going to win any prizes.  Note that on the 787 fleet you do not get the ‘double bed’ seats in the middle of the centre block, because it is 2-3-2 and not 2-4-2.

These planes are virtually brand new and have a substantially more modern look and feel than the 747 and 777 fleets, even though the seat is virtually identical.

I’d chosen this particular window seat as it had unrestricted (but narrow) access to the aisle with no need to jump over anyone else, although it was rear facing.  There was a lady in the front facing seat next to mine talking across the aisle to a young man in 13F who turned out to be her son.  As Club World is quite cosy, I offered to swap seats with her son so they could be next to each other. The mum very happily accepted, although her son didn’t seem quite as thrilled. As it turned out, I was also quite happy with moving. My original seat felt a little claustrophobic, whereas this one on the aisle seemed far more spacious. I was happy to trade my old seat despite losing a window for it. 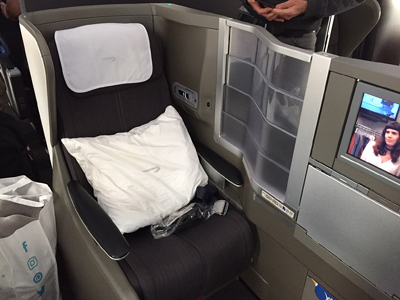 It is worth noting that row 6 and row 7 are in a separate mini-cabin on the other side of the galley.  If you are looking for a quiet flight then this area of 14 seats is the best bet.

Storage around the seat is minimal. There is a drawer down by your feet which is big enough to store a tablet, cables and your shoes but not much more. It also had a USB charging point and multi plug socket (at least UK/Europe) next to it.

I did have a whole overhead compartment to myself so had plenty of storage overall.  I never feel quite as self conscious reaching up into this in business class as I do in economy so it was fine.

And, speaking of self conscious, one of the first things I did was raise the screen separating me from my middle seat neighbour. I’m not sure what the protocol is on how long you should wait to do this but I didn’t want to stare at a strangers face and I’m sure he felt the same.

I tried to raise the screen ….. and it promptly dropped back down again after reaching the top.  Mild panic setting in, I tried again and the same thing happened. Panic turned to embarrassment.  On the third attempt I used my hand to hold it in place when it reached the top and this seemed to do the trick. I’m still unsure if I was not pressing the button for long enough or whether there was a genuine fault.

This Club World seat is advertised with a 72 inch pitch and 20 inch width. That was more than enough to stretch out nicely. In front of me was a magazine holder which flipped down to become a foot stool or part of your bed.

It isn’t particularly narrow like some other business seats and if you’re not a fan of the ‘cubby hole’ style of seat (where you feet end up in a small hole under the seat in front of you) then you will be happy with the Club World design.  You can wave your seat around freely … until the person next to you steps on them whilst climbing over you to get to the aisle …. 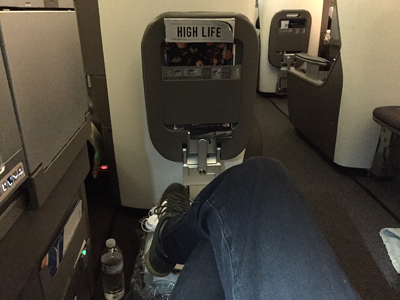 Once I sat down, I was offered a hot towel and a drink. I chose a glass of Canard-Duchêne “Cuvee Léonie” Brut NV champagne. A quick look online reveals a bottle retails at around £30. I also had a bottle of water in the storage drawer. I was also given a little Hotel Chocolat box containing two chocolates.

Amenity kits and bedding were provided by The White Company, part of the new range fully introduced this year.  There was a nice black toiletry bag on my seat.  I’m not sure what material it was made of but it looked and felt good quality. 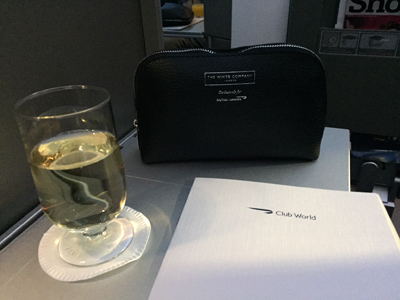 The bag contained spa lip balm, moisturiser and pulse point spray, grey socks, eye mask, ear plugs, toothbrush and a pen – all standard items you expect to find in such kits. As an aside, the toilets also had White Company Spa Restore hand wash and balm. 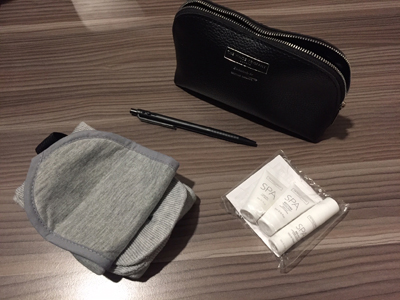 A reading light with dimmer switch was located behind my left shoulder. On my left within easy reach I had the IFE controller and head phone socket. Below this was another USB charging point. 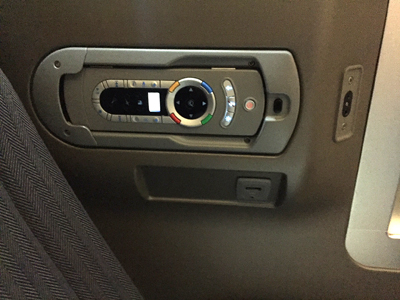 Just before take off I was treated to the new in-flight safety video which follows in the footsteps of the previous film. It brings back ‘director’, comedian Chabuddy G and a host of new celebrities auditioning for him. These include Michael Caine, Joanna Lumley, Naomie Harris and (groan) David Walliams. It is only mildly amusing but kept me watching throughout which I guess is the whole point.  I’m not sure I’d want to watch it multiple times per week if I was doing a lot of short-haul flights.

Once in the air I had a chance to look through the entertainment offering on my 10.4 inch IFE screen.  Whilst British Airways is never going to match Emirates or Qatar Airways for range, it claims over a thousand hours of film, TV and audio available. I couldn’t fault this as there was plenty to choose from.

Films included classics such as Stand By Me and Pulp Fiction through to new releases like A Quiet Place and Deadpool 2. There was also a significant selection of foreign language films from over a dozen countries. You could also binge on TV box sets such as Curb Your Enthusiasm and The Handmaids Tale. 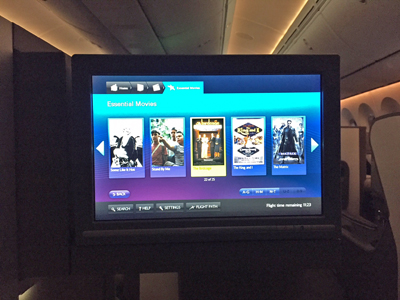 The headphones provided had soft ear pieces but were slightly too big for me. Consequently they did not work well in a noise cancelling capacity so I reverted to using my own pair. 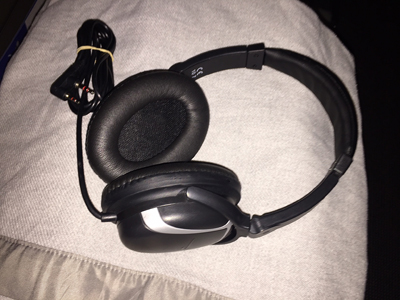 British Airways is slowly rolling out onboard wifi service but it was not available on this flight.

Part two of this British Airways Club World Boeing 787 review, covering the food and drink, can be found here.