At 22.35 last night, the arrival of the British Airways flight from Larnaca marked the final commercial Boeing 767 flight for the airline.

Both remaining aircraft are due to fly out of Heathrow on Monday to the BA maintenance facility in Wales – I’m not sure what will become of them but it seems unlikely they will fly again.  There were originally 11 aircraft in the fleet, with the first arriving in 1989.  At one point the fleet grew to 28 although many ended up being leased to other airlines.

I was thinking of putting together an article on the British Airways 767 fleet but it turns out that it has already been done, far better than I could have done it, in this blog article by a BA pilot.  I strongly recommend you read it if you’re interested in this sort of thing.

In truth, it is being polite to say that the British Airways fleet had seen better days.   The regular random pinging of call bells was a common complaint, something which gets annoying on a four hour flight, as were complaints over water leakage from the galley running down the cabin.  And the broken seats.  And arm rests.  And tray tables.  And the locked-out loos ….

You can either remember them via the picture I used above, or via this picture taken a couple of weeks ago by a friend of mine (click to enlarge): 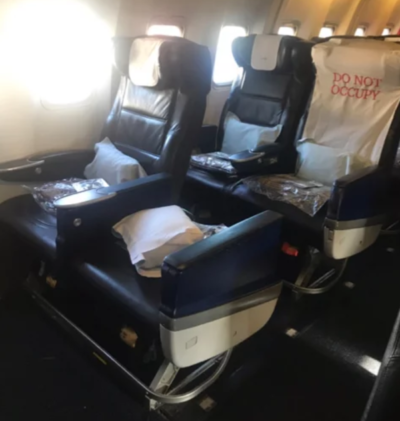 Half of seat 2J has just vanished.  The delights of Club Europe ….