This is our review of the new Hyatt Regency Manchester hotel.

The hotel was rebranded as Hyatt Regency Manchester in January 2002.  This review was written earlier when it was the Crowne Plaza Manchester Oxford Road, but virtually nothing has changed.

Long-term readers will remember that we ran a competition in the Summer as part of a campaign to promote IHG’s various hotels in Manchester.  We were offered a review of the new Crowne Plaza in Manchester as part of that, but the opening date slipped back.  It is now open for business and I went up to take a look.

After Rob reviewed the new two-in-one Crowne Plaza and Holiday Inn Express at Heathrow Terminal 4 I was able to see the brand new combined Crowne Plaza and Staybridge Suites hotels in Manchester.  It complements the existing Crowne Plaza in Manchester as well as the even newer Hotel Indigo that is situated more centrally by Victoria Station.

The Crowne Plaza is built on University of Manchester land, just south of the city centre. It’s a £5 cab from Piccadilly station, for trains from London, and perfectly situated for the universities and science park which surrounds it. 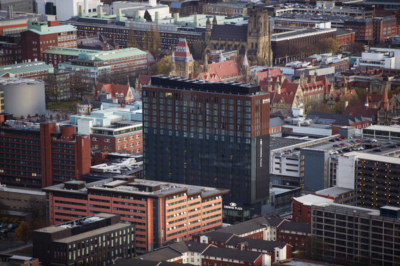 The lobby, bar and restaurant are one open, connected space. However, the funky lighting does a good job of making it feel cozy rather than cavernous and fills the high ceilings. This is a view from the restaurant toward reception: 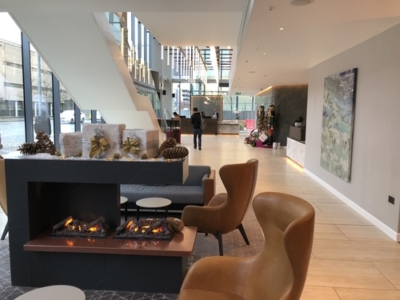 Here is the bar: 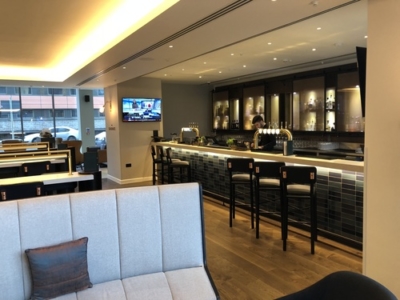 …. which connects to a more casual seating area, seen here from the conference floor level: 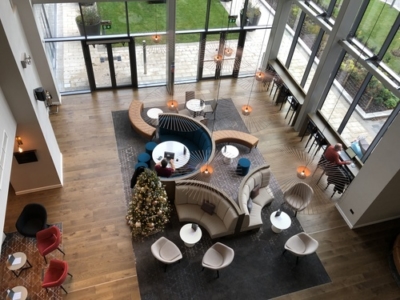 Since the building is shared with the Staybridge Suites, the Crowne Plaza only occupies floors 1-12 of the tower.  I was given a room on one of the club floors on the top level.  A club room is the same size as a standard room but comes with slippers, a Nespresso machine and premium toiletries (Noir by The White Company) as well as Executive Lounge access. I was given a King Club: 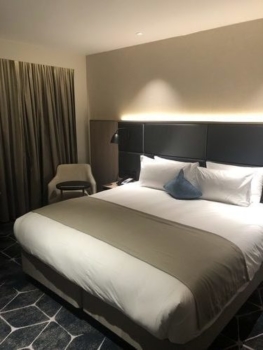 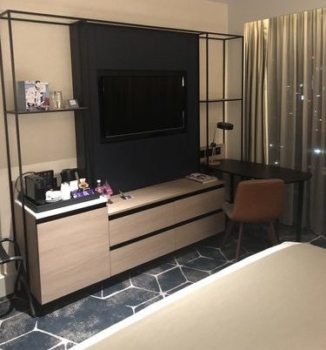 The room was in a corner of the building and comes with two windows which made it feel light and spacious – obviously most rooms only have one window.  As a new hotel it comes with all the usual modern touches – USB and plug sockets on each side of the bed, iron and ironing board, robe etc as well as an additional European standard plug socket at the desk – convenient for travellers who have forgotten their adapters.

Unlike the Crowne Plaza at Heathrow Terminal 4 this room didn’t come with fruit or chocolates.  There were two bottles of water, two biscuits and some hot chocolate sachets as well as the usual selection of teas and (Nespresso) coffees. 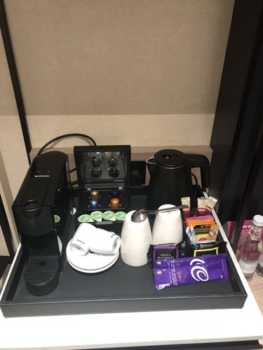 This is the bathroom, including the large shower which extends beyond the wall in the photo. 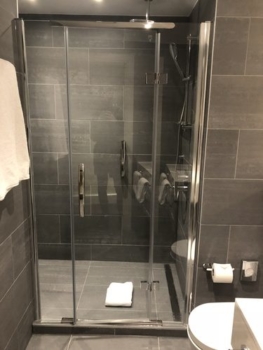 ….. and comes with heated mirrors to prevent them steaming up, which is a nice touch. 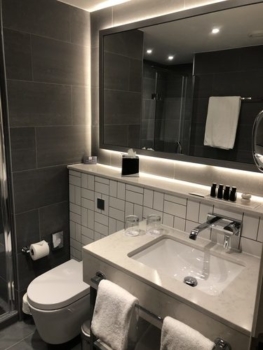 The restaurant is called The Laureate (25 Nobel prize winners studied in Manchester) and serves fusion European and Asian food as well as a pizza menu. This is the restaurant during the day, set up for breakfast in this photo: 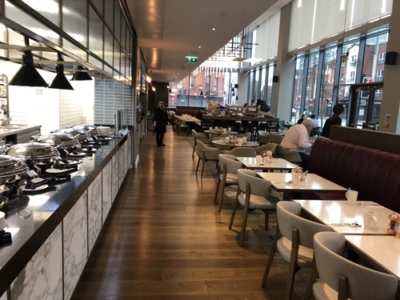 A friend who lives locally joined me for dinner.  We had the crispy duck and beef tartare starters: 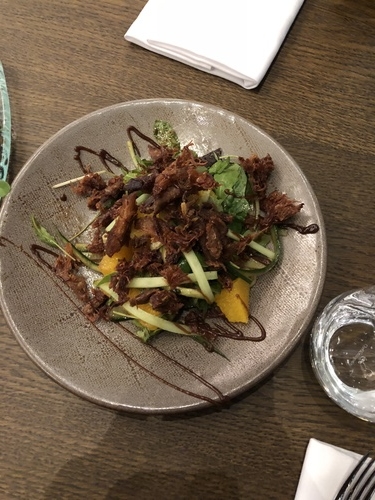 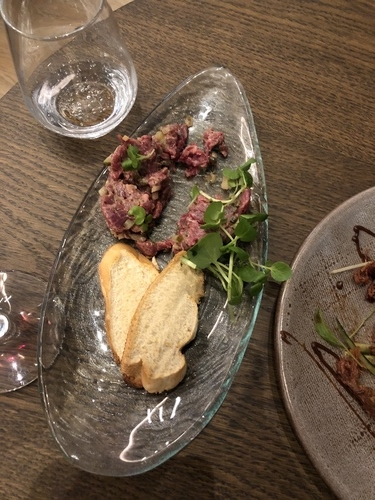 and the sirloin steak: 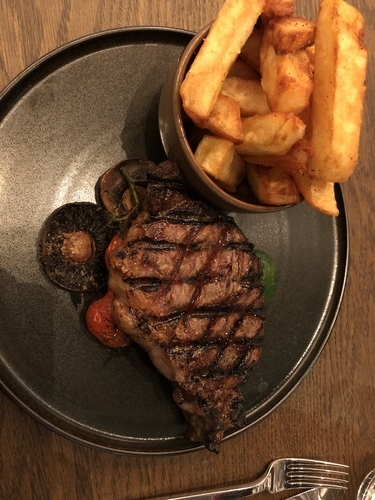 and and pork belly: 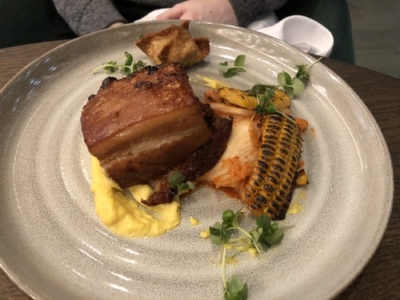 I was very impressed by the quality of the food. The dessert, however, was a slightly disappointing end to an otherwise excellent meal. The fondant was a little dry on the outside whilst the caramelised banana had some, erm, presentation issues. I’d love to know what those little vanilla-flavoured balls were, too… 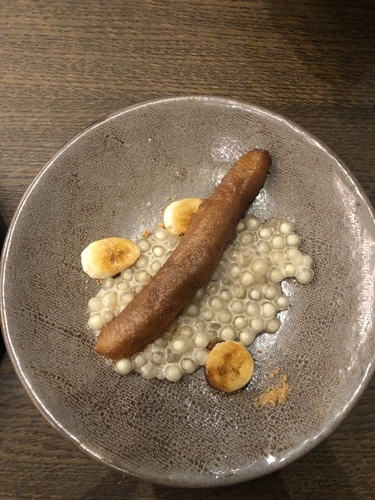 Inside the Club Lounge

If you stay in a Club room, you can access the Executive Lounge on the first floor. I had some problems getting in – you need your keycard – and ended up going back to reception twice before I got a key that would actually let me in.

In the evenings they serve a selection of wines, beers and spirits with waiter service as well as nibbles which included butterfly prawns and chicken drumsticks. The atmosphere was pleasant with a various groups and individuals making use of the lounge. 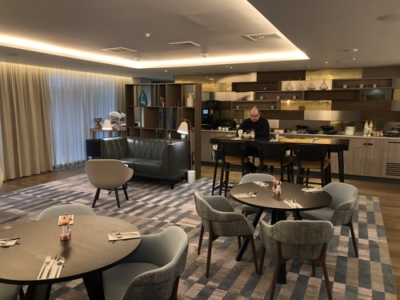 The Executive Lounge also serves a continental breakfast, including a selection of pastries, muffins, yoghurts, cereals, fruit smoothies and meats/smoked salmon.  This is a small selection compared to the bigger breakfast downstairs in the restaurant, which includes a full hot and cold buffet.

The Executive Lounge also has a little quiet work area with two Macs and a printer: 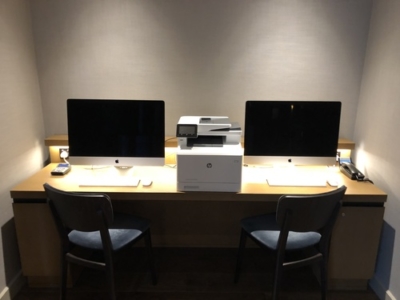 Also on the first floor is the gym, which is lovely and light since it is not in the basement like at many hotels: 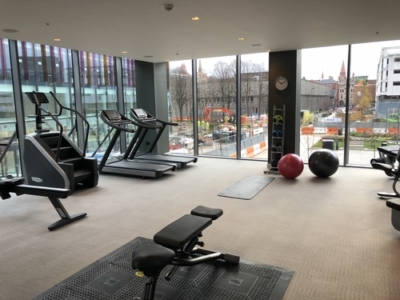 The Crowne Plaza Manchester Oxford Road is a lovely property, with all the amenities you’d expect of a newly-built hotel including excellent connectivity.

The hotel’s location makes it a very convenient base for people visiting the universities in Manchester and the building is physically connected to the business school’s conference centre.

The food and service was outstanding although, as I said above, the dessert did not match the high standard of the rest of the menu.

Tomorrow I will look at the Staybridge Suites which occupies the upper floors of the building and show you how the two brands compare, as I think there is often some confusion about how Staybridge Suites is positioned in the market.

Cash rates at the Crowne Plaza Manchester Oxford Road are around £100 for a standard room for midweek dates in January. About £20 more gets you a Club room with access to the Executive Lounge which is worth paying in my view.  As a redemption, a standard room is 35,000 IHG Rewards Club points.  This is poor value unless cash rates are over £140, which is the minimum required to hit our target redemption value of 0.4p per point.

Thanks to IHG and the Crowne Plaza team for letting me stay and showing me around the hotel.

EDIT:  The new Hyatt Regency Manchester website, now it has rebranded, is here.

Get bonus points: Hyatt’s current promotion is ‘Bonus Journeys’, which is now extended to 28th February 2021. You can learn more in our article here.

Want to earn more hotel points?  Click here to see our complete list of promotions from Hyatt and the other major hotel chains or use the ‘Hotel Promos’ link in the menu bar at the top of the page.