This is my review of the Air France lounge at Terminal 2E (L gates) at Paris Charles de Gaulle.  This lounge opened last year and is impressive.

I took this trip in order to try out Air France long haul, as it will soon be bookable by Virgin Flying Club members using their miles.  The introduction of Air France and KLM to Virgin Flying Club will transform your redemption options to everywhere outside North America, but are the two airlines any good in their premium cabins?

This was a self funded trip booked with Delta SkyMiles gained from an American Express Membership Rewards transfer. 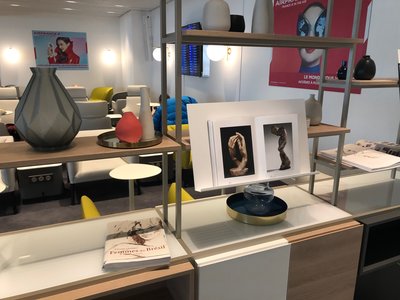 The L Gates are in a satellite building at Terminal 2E.  My flight from London landed here, which may have been a coincidence or it might have been planned to allow connections to a bank of long-haul flights.  Whilst I had to clear security again, I didn’t need to get the transit train.

It is important to note that there are various Air France lounges in Terminal 2E and the one you use will be dictated by the departure gate for your flight as the satellites are not connected.

There are two things you instantly notice about the Air France lounge, which has recently been renovated.  The first is that it is enormous – 34,000 square feet, apparently.  This is the best picture I have which shows the scale of it, but what looks like the back wall is actually just a bar in the middle of the room. 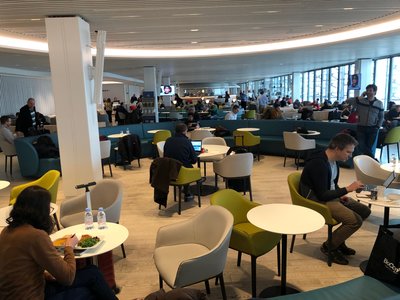 The second thing is that it is built on a bridge over a major road!  Cars are shooting under you all the time, although the lounge is sound and vibration proofed: 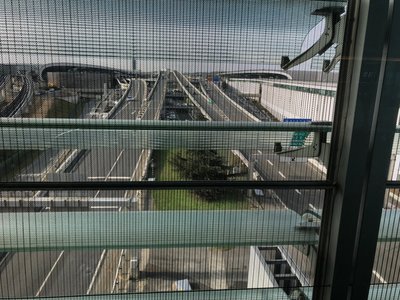 There is a funky video wall lining the corridor as you walk towards the lounge, showing air bubbles in water shooting up.  The reception desk is manned but also has a couple of automatic scanners.  I waved my iPhone boarding pass at one and the scanner turned green, which gave me confidence to walk past the reception staff and in.

Looking left and right, all you see is seating and food and drink stations: 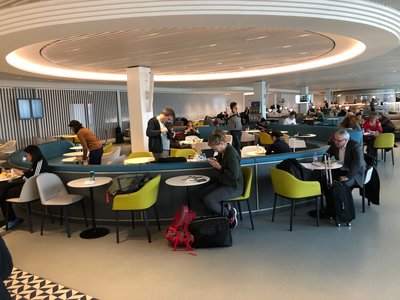 What you don’t see is the large spa area around the corner: 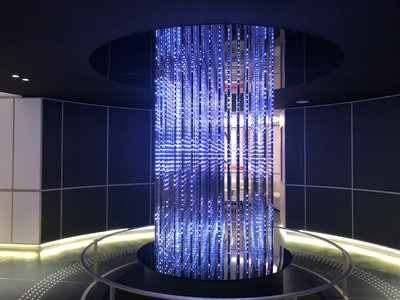 Having left the house without a shower at 6am, I thought I’d take a wash.  The shower suites were impressive – large and well maintained, with towels, a razor, shaving cream, toothpaste / toothbrush and deodorant provided. There was no queue either. 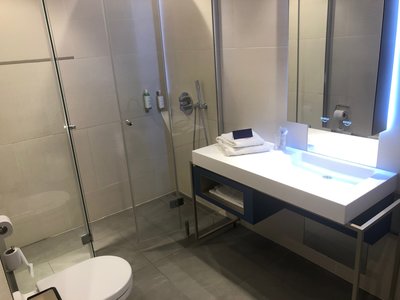 Next to the showers is a chill out area: 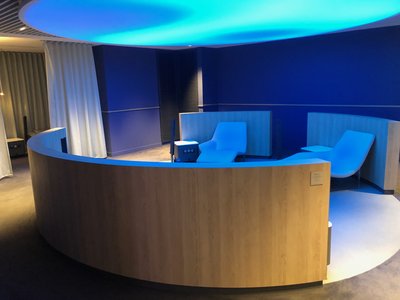 …. featuring day beds (these are only curtained off, not private rooms). 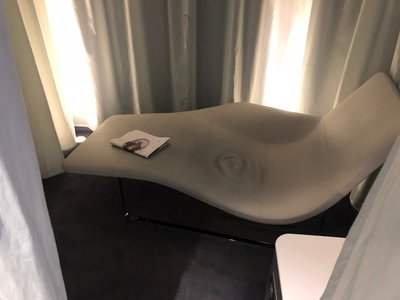 There is also a Clarins spa, similar to the one in the SkyTeam lounge at London.  I forgot to check pricing but I believe that there are complimentary 20-minute facials with other treatments charged.  The spa includes two saunas! 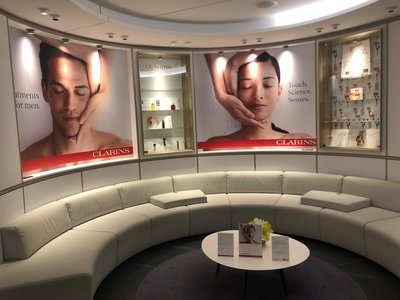 Having eaten at Heathrow and on the plane to Paris I wasn’t in need of another meal.  It was that odd gap between breakfast and lunch when food offerings are always limited, but there was a good particularly good patisserie selection: 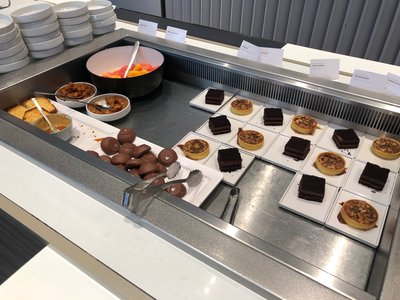 …. and some hot options: 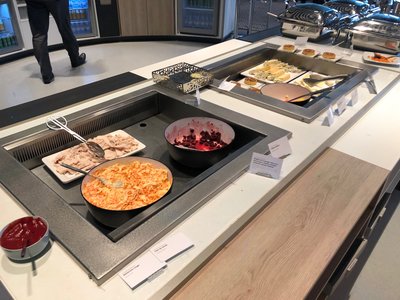 The food selection looks sparser than it actually was.  The serving area is very large and the dishes had been widely scattered.

At certain times of day, the lounge has a chef who prepares food on demand.  The area was deserted mid-morning, however, so I have to rely on a PR picture: 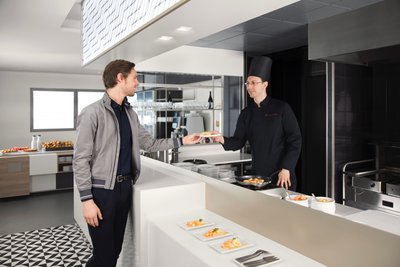 You wouldn’t have gone hungry although it was clearly not gourmet level.  Charles Heidsieck champagne was freely available to help yourself: 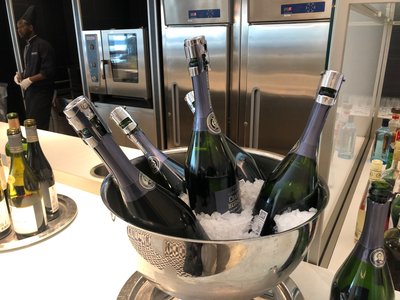 …. along with a selection of self-pour wine and spirits, although there was a separate bar with a good cocktail menu if you wanted anything more complex than a shot.  This is a PR picture of the smart central bar area: 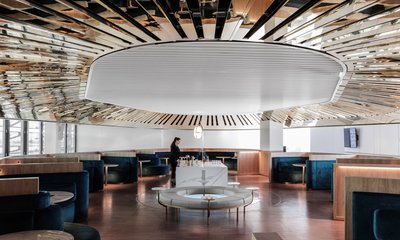 For the kids, one end of the lounge featured a small childrens area although it had little to offer apart from this video games machine: 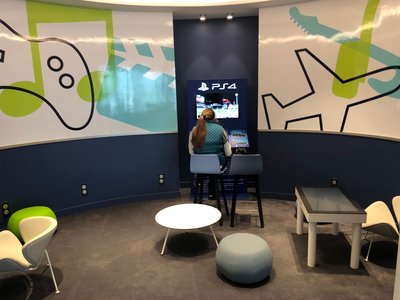 As with the lounge in London, there was a separate cordoned off area.  It wasn’t clear who was meant to use this but I imagine it is used by some First Class passengers: 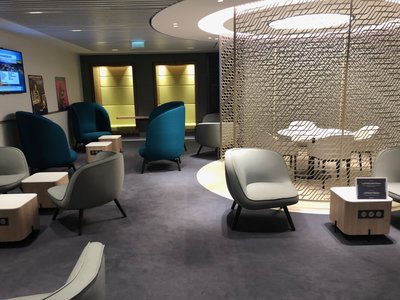 There was no shortage of power points, with most of the seats being separated by small tables which contain plugs.  What I forgot, of course, was a European converter socket – I had smugly thrown my cables into my bag thinking that, as I was off to the Middle East, no converter was needed.  Travel tip of the day: think about the plugs you might need whilst in transit, not just at your destination.

Don’t come here without anything to read, as there was nothing in English I could see amongst the large selection of magazines and newspapers.

The Air France lounge at Terminal 2E (L Gates) in Paris Charles de Gaulle is a modern and impressive space.

I have a niggling feeling that they could have done a little more to break up the l-o-n-g room although they have tried.  One of the things I like about BA’s Galleries First lounge at Heathrow is that you have a number of totally separate spaces – champagne area, business centre, kids room, the terrace, dining area, main lounge area – which makes it feel more welcoming.

Overall, it was a perfectly pleasant place to catch up on emails for an hour or so and I was particularly impressed by the showers and spa / relaxation area.  My only regret is that I wasn’t there at the right time of day to get a proper feel for the food and cocktails.

The next article in this series will look at Air France business class on a Boeing 777-300.