I get a steady stream of emails asking about how to book Avios tickets to Australia or New Zealand.  My honest answer is – don’t bother.  Use cash.

There are three reasons for this:

Avios availability, if using a 2-4-1 voucher, is exceptionally hard to get.  You need to route via Singapore which means you are competing with people who just want an Avios ticket to go there. Capacity on the route has shrunk massively since Virgin withdrew and BA downsized to a Boeing 777.  This means that it is rare to see more than the two guaranteed Club World seats in premium cabins.

Cash tickets to Australasia are disproportionately low.  On a ‘pound per mile flown’ basis, Australasia is astonishingly cheap if you pay.  Over the last couple of years we have seen business class cash fares from the UK – not starting in Europe – as low as £1500 on Malaysia Airlines and as low as £1400 to Auckland with Qatar Airways.  Those deals are unlikely to return, I admit, but you can virtually always find cash tickets ex-Europe for under £2,000.  When you factor in the taxes on an Avios ticket, plus the huge amount of miles earned back for paying cash, plus the ability to pick and choose when you go, it is no surprise that redemptions look second best.

To put the availability issue in context, as of yesterday afternoon there were just seven days between now and the end of the year when you get two Club World seats between Singapore and Sydney.  Even then, you would also need to match up suitable London – Singapore, Sydney – Singapore and Singapore – London availability, which is virtually impossible.

There is, however, one way to get an Avios reward flight to Australasia with far fewer availability issues and using far fewer Avios.  The only snag is that you can’t use a British Airways American Express 2-4-1 voucher.

95% of British Airways Avios collectors do not know that BA has a second redemption chart.

Many of you will never have seen this chart before (click to enlarge) or at least not before you started reading HfP: 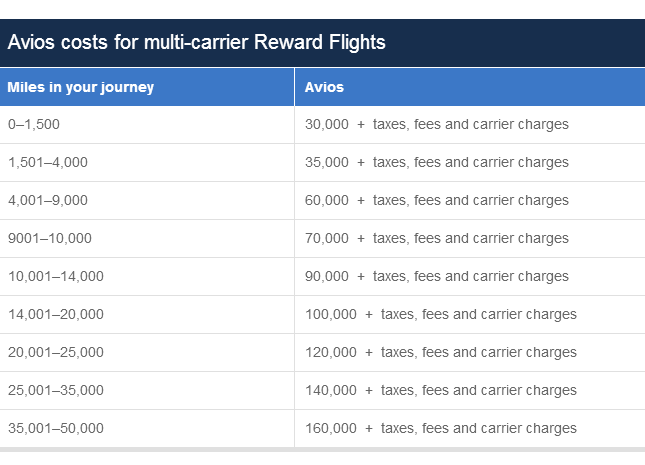 If, for example, you flew from London to Amman on Royal Jordanian and then caught a Qatar Airways flight to Doha, it would be priced using the chart above.

Importantly, this reward chart did NOT change when BA recently increased the redemption costs for partner airlines.

The chart above is for economy travel.  Multiply by two for business class and by three for first class.

How to use this chart to get to Australasia

If you use oneworld partner airlines to get to Australasia, you have a lot of options.

You will struggle to find a way of not finding business class availability when you have all these airlines to choose from.

Here is a real example from a Head for Points reader which he sent to me:

Because this involves three non-BA oneworld airlines it prices off the multi-partner chart above.  As he is travelling 19,822 miles, the total cost in Business Class was 200,000 Avios plus under £600 of taxes.

This is a far better deal than 300,000 Avios (peak day) plus £700 of taxes if you booked London to Sydney on British Airways in Club World – and you won’t be doing that anyway, because availability is virtually non-existent.

The itinerary above is actually a very simplistic way of using the multi-partner chart.  If it wasn’t for the fact that this itinerary is so close to the 20,000 mile threshold, you could have added in a number of domestic flights on Qantas or Japan Airlines.

What else can you do with the multi-partner reward chart?

Here is an example of a round-the-world routing using the multi-partner chart.

It is worth noting that I have never seen a firm list of the rules for booking multi-partner reward tickets.  Most BA call centre agents will never have booked one.

In theory you need to have every segment in the same class as just one in a higher class will reprice the entire itinerary.  However, some people have reportedly had agents charge based on the longest class flown, ie if 60% is economy and 40% First then they were charged economy!

In theory, there are no rules on backtracking although this may be down to badly trained agents.  One example I saw was basically multiple holidays from London to somewhere, back to back, to get to eight sectors!  If the agent allows it you could book, say, London to Qatar and home, London to Hong Kong and home, London to Tokyo and home, London to Kuala Lumpur and home as one booking – as long as you are using at least two oneworld carriers – and save a huge number of Avios on booking four holidays separately.

In truth, no-one seems clear.  The ‘eight flights maximum’ rule does seem to be firm – but that still gives you a huge amount of flexibility to put together a great trip.