The BALPA pilot strike threat has been pushed down the news agenda this week because of the threatened (and then postponed) strike by UNITE members at Heathrow and yesterday’s IT meltdown.

A pilot strike is still a very real risk, however.

I spoke to a BA pilot yesterday who is up to date with the current negotiating position.  This is where things stand:

British Airways is claiming that it has no money, effectively, despite reporting impressive Q2 results and expecting another year of substantial profits, and despite finding a few pounds to take BALPA to court last week – and whilst this was not reported at the time, British Airways has been told by the court that it must pay BALPA’s legal costs as well as its own.

BALPA has agreed to another, potentially final, round of ACAS discussions which will start today (Thursday) 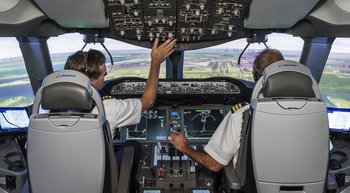 Here are the current sticking points:

The current pay offer is not linked to RPI.  Whilst British Airways has sold this – and it was accepted by cabin crew – as an ‘above RPI’ offer, this is not guaranteed to be the case.  BALPA wants an RPI+ pay agreement.

BALPA is insisting on a profit share arrangement, similar to the one KLM recently introduced for its pilots.  Jet2 has also just awarded its pilots a bonus equivalent to 4-weeks pay.  The current bonus scheme, which has ten different triggers, is seen as one which is designed to stop payments being made.  BALPA would like a scheme based on a fixed percentage of profits.

The ‘gain share’ proposal on cost cutting, which has been accepted by cabin crew, is not acceptable.  (For what it’s worth, I agree.)  Employees do NOT share in the gains from cost cutting programmes – they only share in the additional gains over a random ‘base case’ figure put in place by management.  With no control over the ‘base case’ figure it is easy to see why this is not attractive.

BALPA has concerns over the governance of British Airways.  IAG, the parent company, refuses to get involved in negotiations because it claims that BA, Iberia etc have the freedom to operate at arms length.  BALPA believes that this is not the case and that the BA negotiating team is uncertain as to what it can agree without facing the wrath of IAG.