Pilot unit BALPA is staging a number of strikes throughout September.  BALPA represents about 90% of British Airways pilots.

You can find the latest information on this special strike page of ba.com.

Note that flights from London City Airport are not impacted, except for the New York service which is operated by Gatwick flight crew.

Only ONE British Airways flight was operating from Terminal 5 on Monday 9th September.  This was a Tokyo service and was retained due to the Rugby World Cup.  The only other flights operating were to Cairo (operated by Air Belgium at the moment due to a shortage of BA aircraft) and the Iberia flights to Madrid.

From Gatwick, the only flight was a New York JFK service which is currently operated by Evelop Airlines on behalf of BA, again due to a shortage of BA aircraft.

All passengers were contacted over two weeks in advance of travel.  Despite some initial hiccups (which forced The Civil Aviation Authority to publish this statement) British Airways was eventually very proactive in moving passengers to other airlines with over 50 carriers involved. 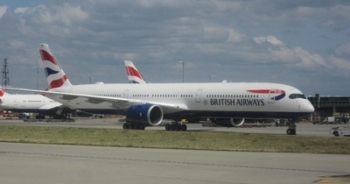 What about Wednesday 11th?

A normal schedule will operate, although some services are likely to be cancelled due to planes and staff being in the wrong place.  There is no space at Heathrow to store the entire British Airways fleet, and so aircraft have had to be parked at other airports across the world.

What about Friday 27th?

Cancellations have not yet been done for the strike on 27th September.

The cut-off date for British Airways is 13th September, which is the last date they can cancel your flight without offering compensation on top of a reroute.  Note that some flights on 28th and potentially also 26th will also be cancelled for operational reasons.

What can I claim if I am stranded abroad?

For people stranded abroad, British Airways has confirmed that the standard £200 per night per room hotel allowance will be available.  This can be exceeded but only if you have strong evidence that no rooms are available for that price.  You cannot remain in a £500 beach resort and reclaim that if there is an airport hotel available for under £200.

Other subsistence costs (food, taxis etc) can also be claimed.

You are not technically liable for additional costs incurred in the UK before or after travel due to date changes, but it is worth submitting receipts to BA anyway.

Will I receive Avios and tier points for cancelled flights?

Yes.  If you accepted a refund or were moved to a non-oneworld airline, you can ask BA to credit you with the Avios and tier points you would otherwise have earned.

Don’t forget to sign up to earn points from the airline you were moved to, if it is not a BA partner!  Nothing stops you earning twice.

Could the strikes be called off?

BALPA has offered to reopen talks with British Airways, but the airline has stated that no new offer is available.  The airline appears to have decided to push on with strikes rather than accept the pilot demands for profit sharing.

Can more strikes be called?

Yes, but 14 days notice must be given.  Your trip is safe once you are inside the 14 day period.

(And, to be honest, a lot of people have been getting some good results in terms of alternative carriers!  Being moved from British Airways onto Qatar Airways, Cathay Pacific, Malaysia Airlines etc etc – if you are travelling in Business Class – would be a good result.)

BALPA’s strike ballot, held earlier this summer, is valid until January.  This allows BALPA to continue calling strikes throughout the Autumn without requiring a further member vote.

For the latest information, check out ba.com here.