This is our review of the Marriott Canary Wharf hotel in London.  Officially it is the London Marriott Hotel Canary Wharf but that is too much of a mouthful to keep repeating ….

Finding a hotel for a week in London this Summer, so I could attend the HfP Summer Party amongst other things, ended up being quite a challenge. With Wimbledon and several other events happening that week, prices were sky high and points availability low.

I ended up spending the first night at the Travelodge in Clapham Junction, where I was greeted by a fan on the desk as the hotel didn’t have air conditioning (I think I don’t need to say more about this hotel).  I should be clear that this was my idea and not Rob’s, as I had a friend nearby …. 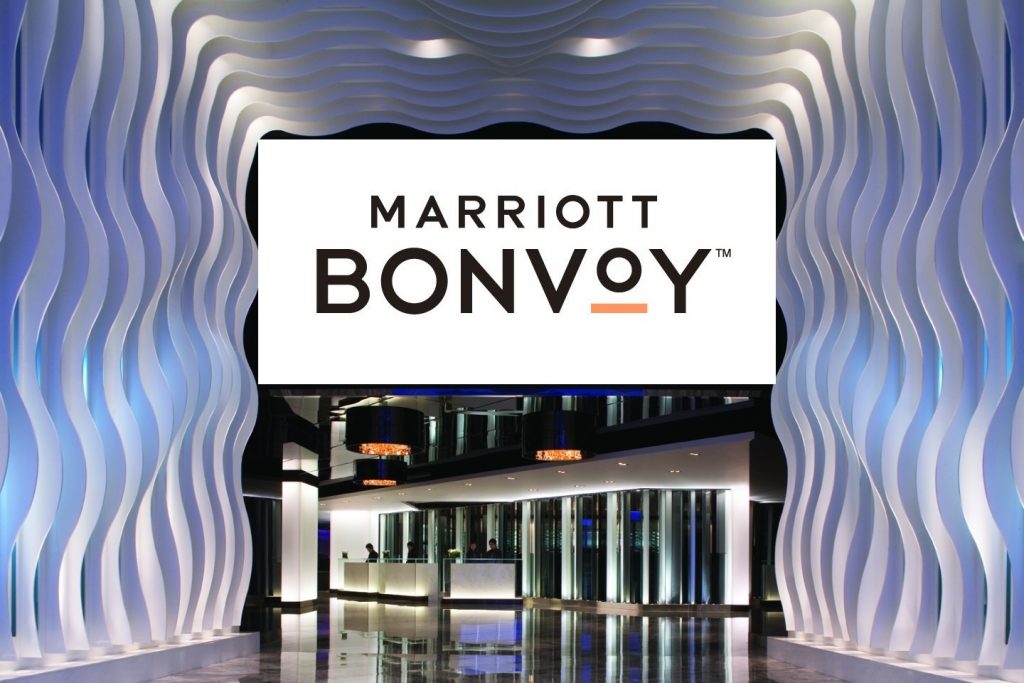 The next day I moved into the Marriott Canary Wharf which did have air conditioning and was an overall great hotel.

Even better, as I was there for five nights we took advantage of the global ‘five nights for four’ deal on Marriott Bonvoy redemptions.  This meant that the total cost was just 140,000 points for five nights, compared to a cash cost of almost £2,000.

Booked via Rob’s account, which is Titanium Executive, I also got access to the Executive Lounge and had buffet breakfast in the Manhattan Grill included.

Where is Marriott Canary Wharf?

The Marriott Canary Wharf is, as the name suggests, in the Canary Wharf financial district. You can either walk from Canary Wharf underground station (about 10 minutes) or take the Docklands Light Railway to West India Quay.  This is literally next to the hotel’s main entrance and indeed runs past many guest windows!

West India Quay has a direct train to Bank.  With the HFP office located at Moorgate and with a number of meetings scheduled in the City and central London the location of the hotel was very convenient for me.

This is a PR shot of the building.  Note that it is partly apartments and partly hotel – the hotel is nowhere near as big as it appears from the outside. 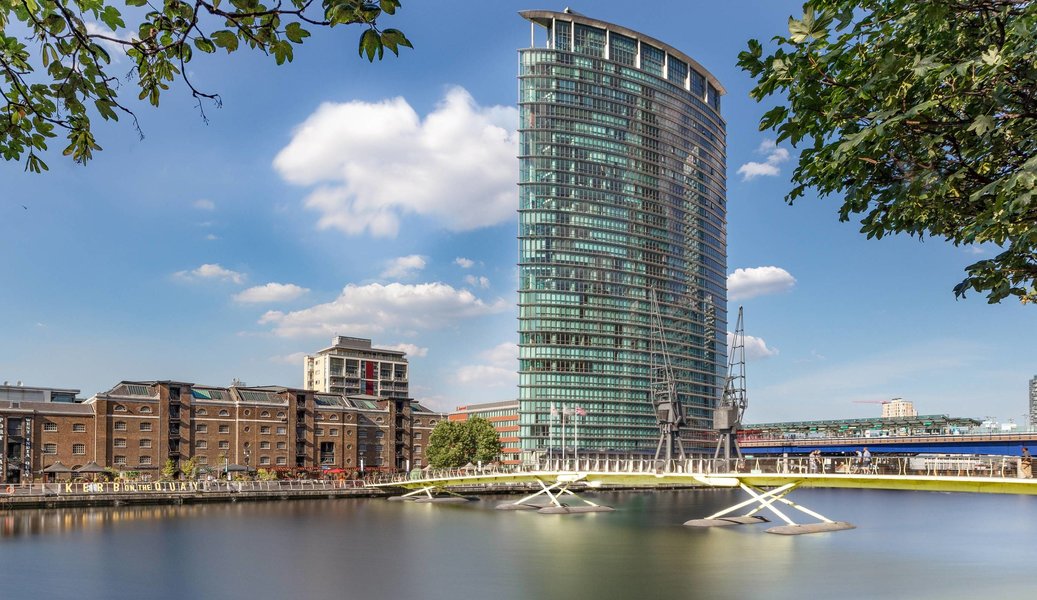 In the picture below you can see the side entrance to the hotel which is open during the day and which is the closer exit if you want to walk to Canary Wharf station.

To the left along the water were several restaurants and bars which were a nice addition to the restaurant inside the Marriott.  The Museum of Docklands, which is free and also has a cafe, is also just a few seconds away. 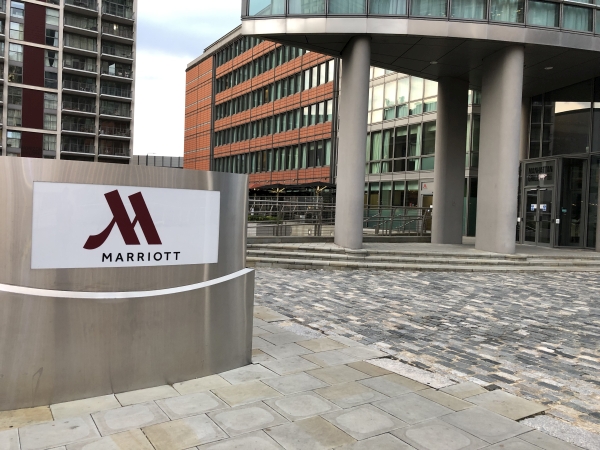 If you use the main entrance you have to walk up stairs to get to the reception area.  A friendly concierge helped me carry my luggage up.

The reception area had two desks and was actually quite busy when I arrived.  (I took the picture below on one of the other days).

At the far back were the elevators and the entrance to the Manhattan Grill. To the right was a bar – the G&Tea Room – and restrooms. 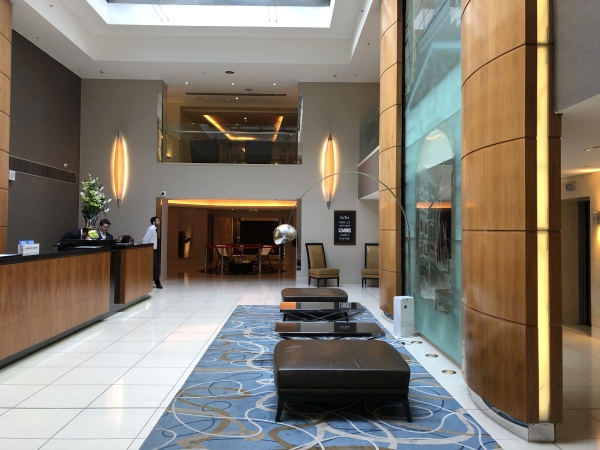 My Room at Marriott Canary Wharf

I was staying in an Executive room on the 7th floor with access to the Executive Lounge.

The room was bright with floor to ceiling windows.  This was the view – you don’t see much in the way of London landmarks but you get far more light than most London hotels. 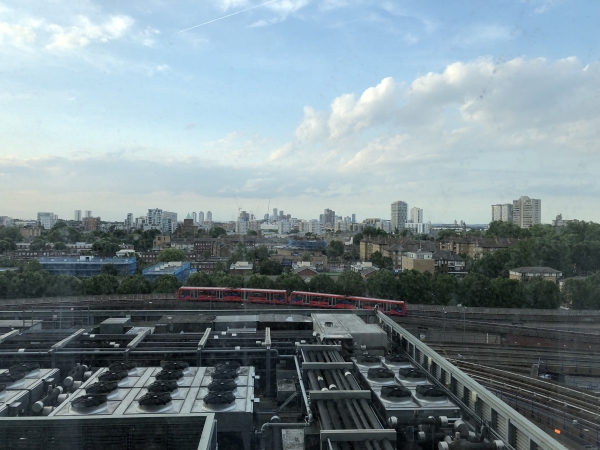 The room was about 31 sqm according to the hotel website which is a decent size for a London hotel.

Next to the king size bed was a chaise longue and a small side table. 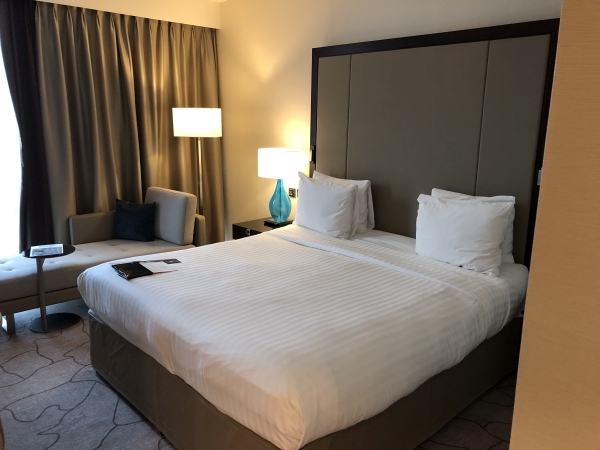 The desk was a good size and doubled as a tea and coffee station – kettle and instant coffee only, but the lounge had proper coffee machines.  There were also two small bottles of water on the desk which were replenished every day. 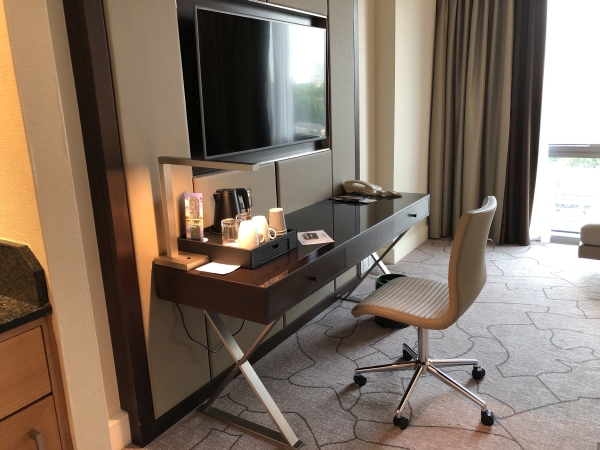 The bathroom was a bit small and the door when open covered half the bathtub. Speaking of which, I normally like to have a bathtub/shower in my hotel room compared to shower-only, but the bathtub was pretty high and I bumped my knee more than once trying to get into the tub.

The sink was a good size and there was a lot of space around it to store my toiletries and make up. 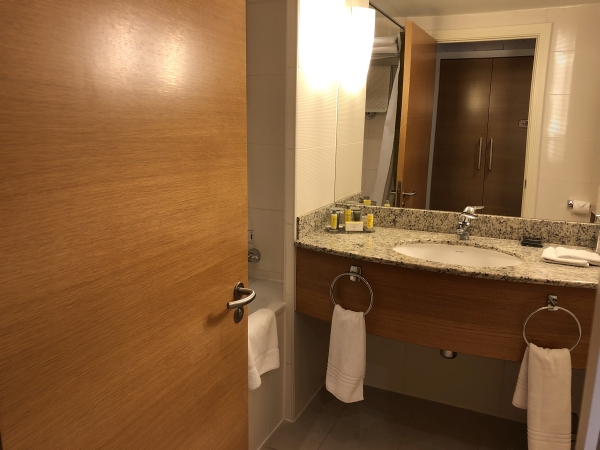 Shampoo, soap etc were by Acca Kappa as seems to be standard in higher end Marriott properties in Europe. 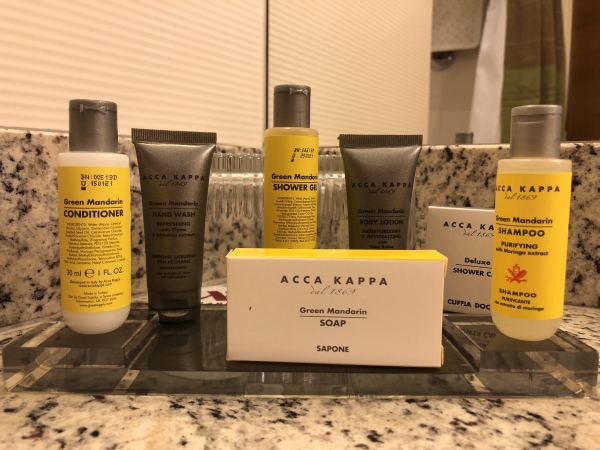 Two small complimentary bottles of prosecco were waiting for me in the room, but they were warm and I was (still am …. it drags on!) pregnant ….. 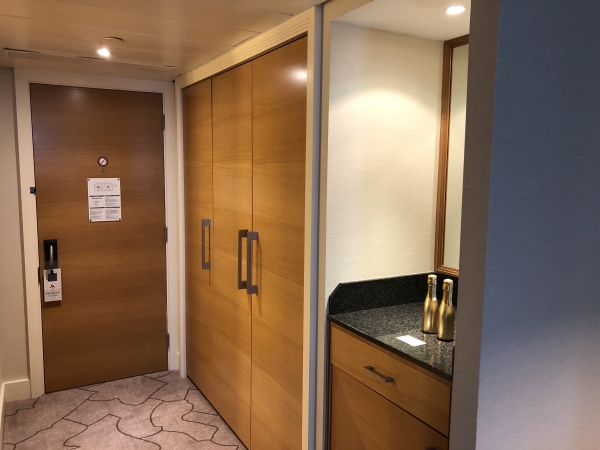 This was the inside of the wardrobe. 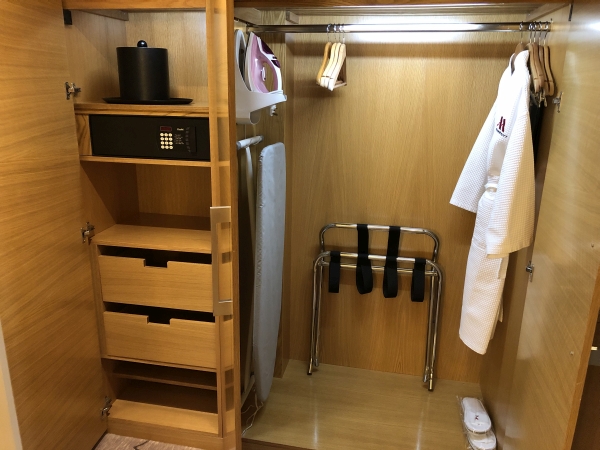 The lounge, which is open 24/7, was located on the 7th floor close to the elevators.  You could access the lounge with your room key.

It was definitely one of the larger Executive lounges I’ve been to with one smaller and one larger sitting area. 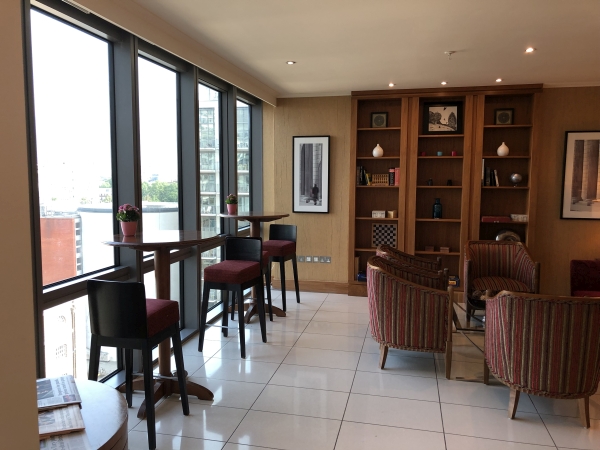 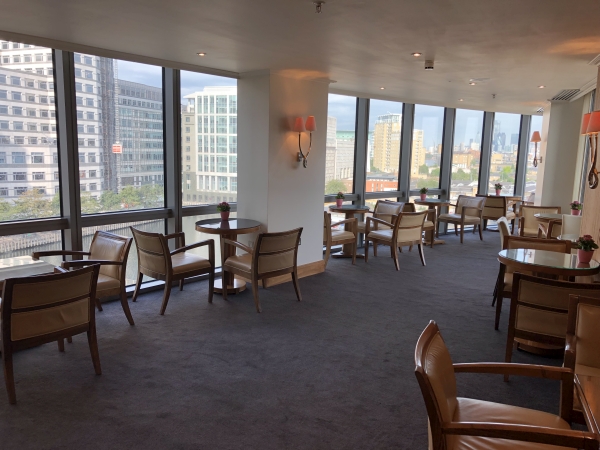 This was the view from the larger sitting area, with the quayside restaurants and Museum of Docklands in the foreground. 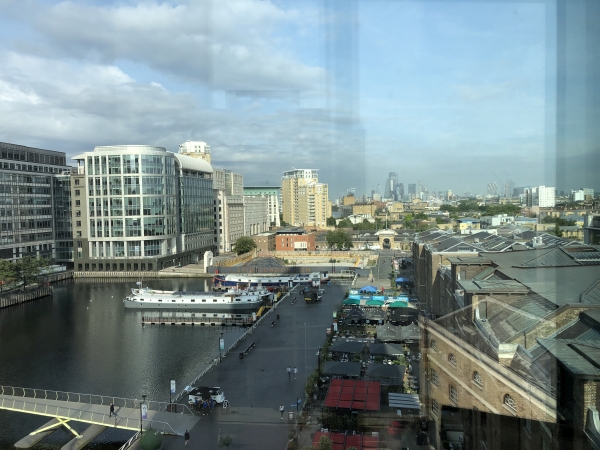 During the day the lounge offered soft drinks, water and coffee as well as snacks.  In the mornings there was a smaller version of the continental breakfast buffet from the restaurant.

From 5:30pm-9:30pm there were complimentary alcoholic drinks as well as hors d’oeuvres. 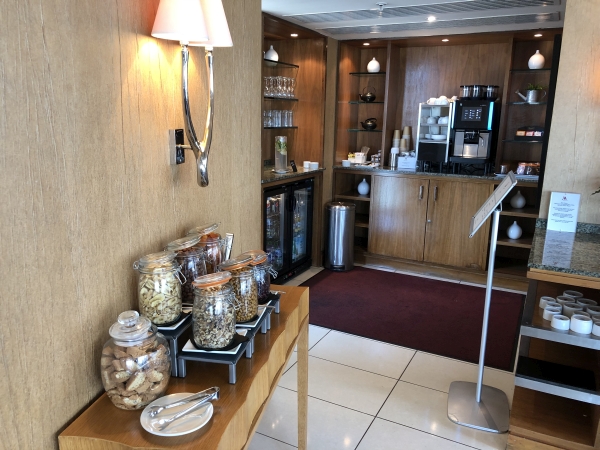 Breakfast was served at the Manhattan Grill on the ground floor.  If you do not have breakfast included with your stay, the buffet is £25, continental breakfast £18 and full American breakfast £22.

The restaurant was very busy throughout the whole morning and despite there being a large number of tables, there was constantly a queue to be seated. If you are in a hurry and have access to the Executive Lounge, it might make sense to eat there instead.

The food selection was vast offering everything from cereals, yogurt and fruits to various bread, rolls and pastries. 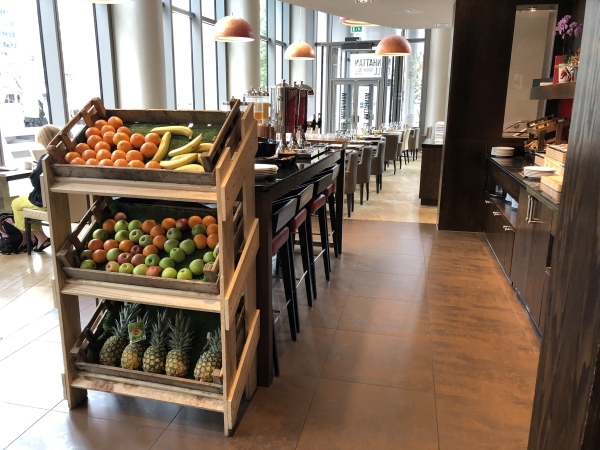 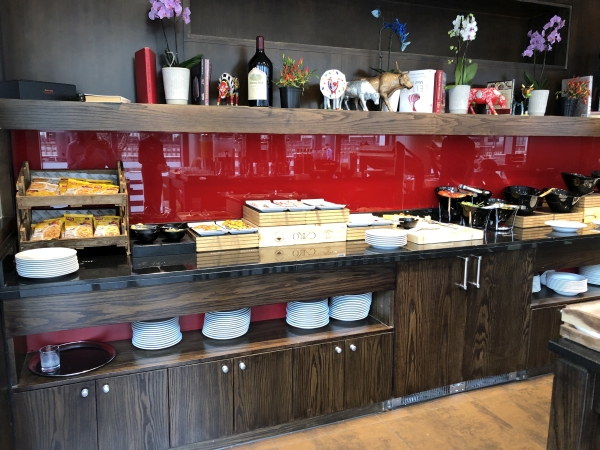 For those who prefer a cooked breakfast, there was also a cooking station with a full English breakfast, waffles, pancakes and made to order egg dishes.

How did I find Marriott Canary Wharf?

To be honest when I was living in London I rarely made it out to Canary Wharf – I was more of a SW person – and I did enjoy staying at Marriott Canary Wharf for a week and getting to know the area a bit better.

There were many restaurants and shops around and having the DLR and Jubilee Line nearby made travelling to meetings easy.  Many people don’t realise how large the underground shopping complex is at Canary Wharf, and easy access to Greenwich is another plus.  On a sunny day you can even walk along the Thames Path into Central London – you walk directly by the water for the much of the route. 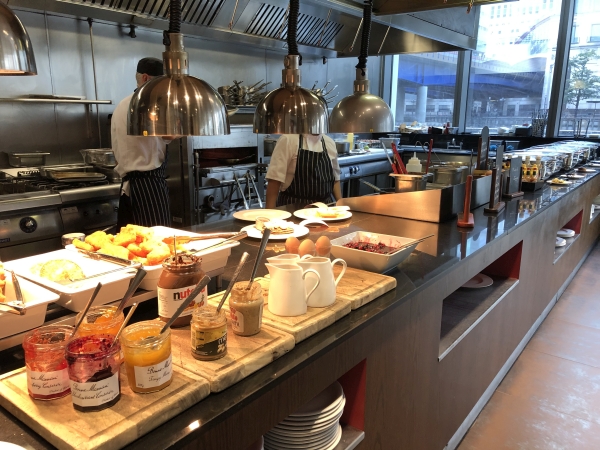 The hotel itself was decent, my room a good size for a one week stay and I loved the breakfast buffet.  With hotel competition hotting up at Canary Wharf – we’ve had the large new Novotel and Hilton’s Lincoln Plaza open relatively recently – rates can be reasonable.

Using Marriott’s new ‘search by month’ feature, I can see that October room rates vary from £132 to £586!  For points, there is just one night at ‘peak’ pricing (40k points), six nights at off-peak pricing (30k points) with the remainder at the standard rate of 35,000 points.

Anyone looking for a good value Bonvoy redemption, or who has Platinum Elite or Titanium Elite status which qualifies them for lounge access, will have an extra incentive to stay here.

The Marriott Canary Wharf website is here if you want to find out more.