Back in April, we told you about a very interesting new Hilton Honors redemption option that was on the way in New York – Conrad New York Midtown.

The good news is that the hotel officially opened on 1st October.  It was never actually closed, but the renovation was so chaotic (the hotel has had no restaurant for most of the year, for example) that the Conrad branding was kept off it until everything was ready.  It is now.

Back in 2017, Hilton quietly look over management of The London NYC hotel.  This is a property with a troubled history which opened as an unbranded ‘virtually all suite’ hotel at entirely the wrong point in the economic cycle.  Readers with long memories may remember that Gordon Ramsay ran the restaurant and it gained two Michelin stars within a year of its 2006 launch.  There was also a branch of Maze at one point as well as a high profile bar.

A substantial refurbishment programme was launched by Hilton which has, by all accounts, transformed the hotel.  What has not changed is that this remains an ‘all suite’ hotel.

The Conrad New York Midtown website is here.  It is located on West 54th – for comparison, the southern boundary of Central Park is West 59th. 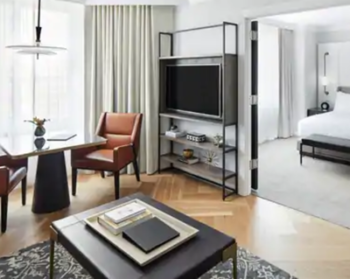 This is the 2nd Conrad hotel in New York

There is already a Conrad in New York in Battery Park – see here.  I like this hotel a lot – see my Conrad New York Downtown review here – because it is also ‘all suite’ and I have stayed there 3-4 times.

In a city where hotel rooms are not exactly spacious, being guaranteed a suite, often with a view of the Hudson river, was always a good result.  The location has also got a lot more attractive in recent years as the World Trade Centre redevelopment concluded and new attractions such as the Oculus transport hub and the revamped Brookfield Place shopping centre took shape.

For those of you who insist on being in Midtown, you now have a good points alternative.

Let’s get one thing out of the way first.  Conrad New York Midtown is not a bargain, coming in at 95,000 Hilton Honors points.  This is as expensive as it gets.  However, you are getting a lot for your money.

Let’s take a look at the Conrad New York Midtown website for a stay in early November.

This works out at 0.55p per Hilton Honors point, which is substantially above my typical 0.33p valuation.

All of the photographs in this article are of the One Bedroom Suite. 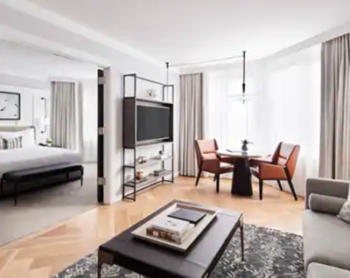 You can still buy Hilton Honors points with a 100% bonus

It this deal looks interesting, remember that Hilton Honors is running a promotion offering a 100% bonus when you purchase 5,000+ points.

However, the maths DOES work at Conrad New York Midtown as I showed above, where you are getting well over 0.5p per point.

Hilton also does ‘five nights for the points of four’ if you have Hilton Honors status.  As Hilton will status match you from any other hotel scheme where you may have status – see this article – most HFP readers should qualify for this.  Five nights would cost you (95,000 x 4) 380,000 points which would cost $1,900 with this deal.

The snag is that you are capped at buying 160,000 points per year.  However, remember that you can pool points between Hilton members for free so it is now easier for different people to buy points and merge them together.  New members of Hilton Honors cannot buy points immediately so you cannot open additional accounts just to take advantage of this offer.

You can buy points via this link.  The offer ends on 22nd October.

Membership Rewards points convert at 1:2 into Hilton Honors points.  The cards above all earn 1 Amex point per £1 spent on your card, which converts to 2 Hilton Honors Points.

However, until 31st October you get a 50% bonus when you transfer Amex points into Hilton Honors.  Full details are in this HFP article. The offer is targetted (but widely) so do not convert if you were not emailed about it.

You can also convert Virgin Flying Club points into Hilton Honors points at the rate of 2:3.  You may want to get one of the Virgin Atlantic credit cards:

You can find out more about Conrad New York Midtown on its website here.  Given the location, the size of the rooms and the good value per point, it is well worth a look on your next New York trip.