This is part two of our review of Vietnam Airlines Premium Economy on a Boeing 787-9 from London Heathrow to Hanoi.

Part one, which looks at the Vietnam Airlines premium economy seat, can be found here.

This second part looks at the food and in-flight entertainment. As a reminder. Vietnam Airlines offered me and my plus one complimentary flights (one way Premium Economy, one way Business) to Hanoi for review purposes. 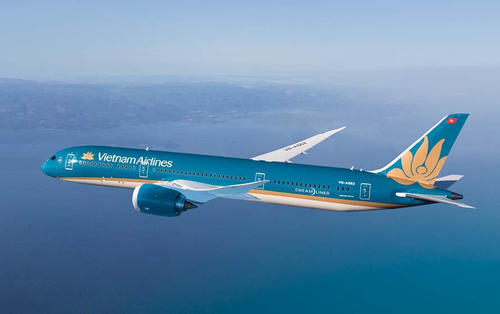 After take off, cabin crew came round with (basic, over ear) headphones, a menu and cold towels.

The menus were a little confusing. They were listed as covering flights between Hanoi and Paris or Paris and Hanoi. I assumed the meal from London would be the same as the Paris-Hanoi listing but – as I found out –  I was wrong.

Each meal has a western and Asian main course to choose from.  The cabin crew came around with their trolley and handed out our trays. When they got to us we were offered a choice between chicken or beef – not the chicken or salmon in the menu – so we were a little confused.

I wanted to try the Asian main, but it was not clear which was which (I should have asked). I ended up getting the beef, which was western style – click on any image to enlarge: 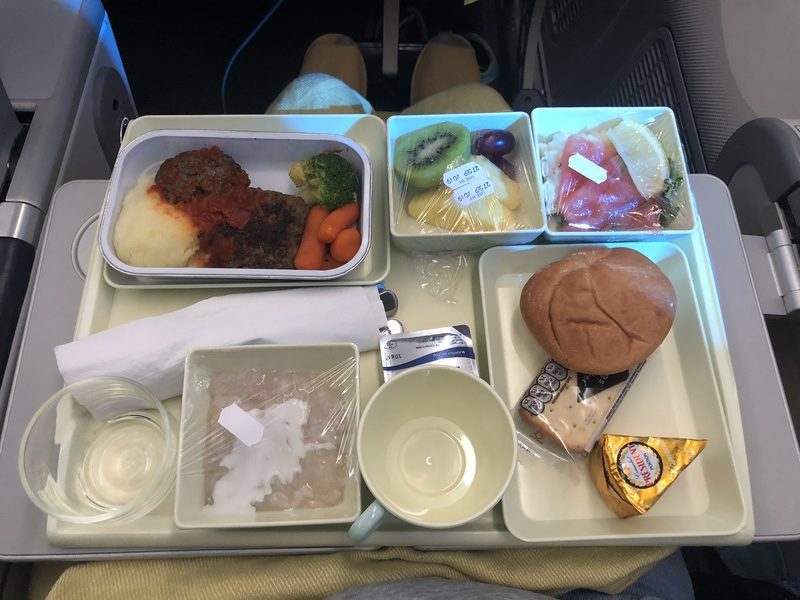 ….. which was frankly, very disappointing.  It was dry and flavourless. I gave the cabin crew a call and asked if they had any of the chicken left …. which they did. 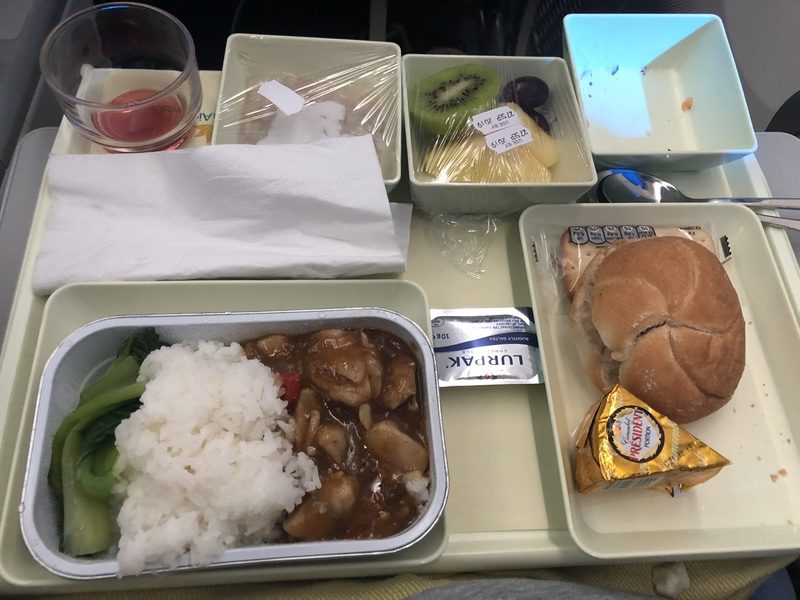 The chicken was far better, and had a nice little kick to it.

There was certainly no shortage of food on the tray.  It included a potato salad and salmon starter (surprisingly delicious), the main course, a bread roll and butter, a fruit dish, a dessert rice dish and some Le President Camembert and table crackers. The Camembert was phenomenal!

At the same time as handing out meal trays the cabin crew also handed out drinks. I went for red wine, which it turns out is poured in these teeny tiny cups. 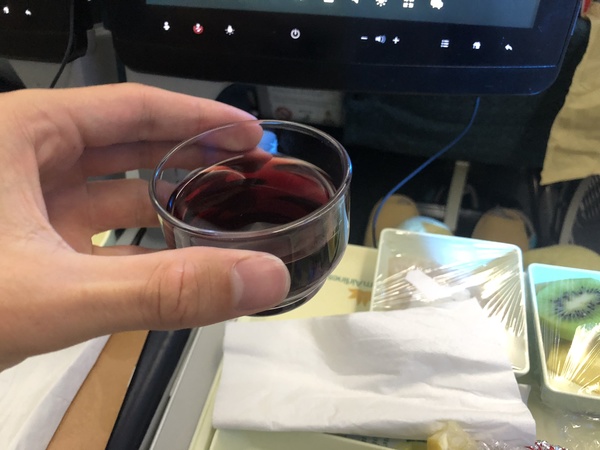 Luckily the cabin crew came around with the bottle again after a few minutes. I thought I was being clever when I handed them a normal size plastic cup from earlier, but in fact they poured about the same amount.  I’m told these small glasses are a cultural thing ….

Once the trays were cleared we were offered a full size bottle of water.  The cabin lights were then dimmed to allow people to sleep if they wanted to.

During the flight I wanted to ask for another bottle of water but had trouble calling any cabin crew. Although I used the crew attendant button nobody came – although later on the service was very responsive.

In flight entertainment on Vietnam Airlines

In premium economy the IFE screens pop out of the central armrest. This means they cannot be used for takeoff and landing. 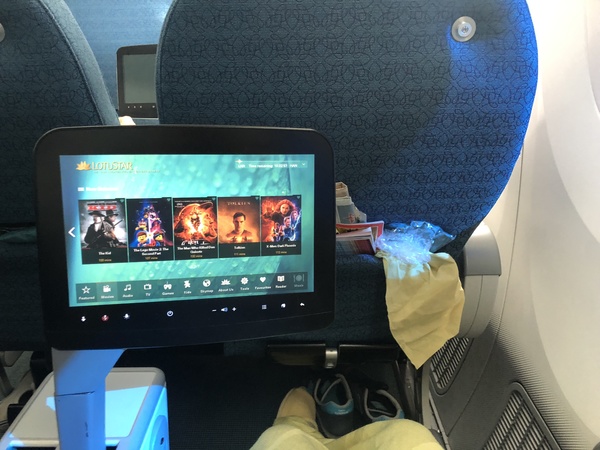 The screen itself is good and extremely responsive, and the Vietnam Airlines catalogue is fairly typical – it isn’t the umpteen thousand channels of Emirates but you are also not stuck with 1970’s re-runs!  It had a mixture of Western and Asian programming, including a variety of new releases.

As someone who is not particularly interested in blockbusters any more it would have been nice to see some more smaller films but that is true of almost any airline I travel on. I ended up watching Tolkien, the Emma Thompson Late Night comedy (which was average – but hardly the fault of Vietnam Airlines!) and the brainless Alita: Battle Angel.

There are two toilets at the front of the premium economy cabin. These are just standard-sized airplane toilets. They do, however, come with several amenities including razors!  I’m not sure who uses them (I couldn’t see shaving cream!) given the tight constraints of the space but it was a nice thought.

If you feel peckish during the night, you can ask for these tiny sandwiches which come in a range of fillings: 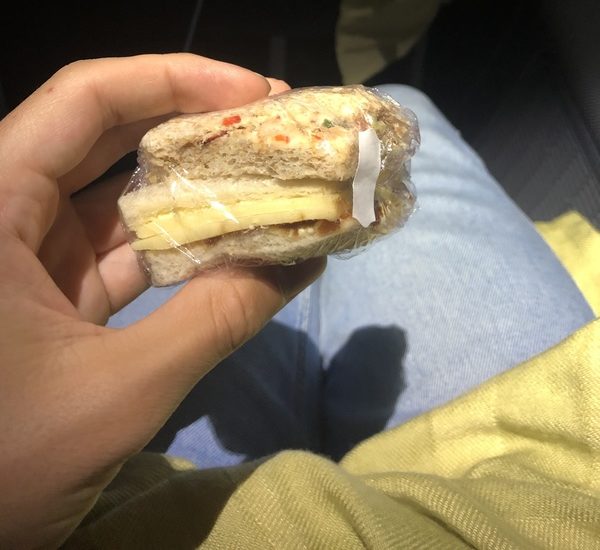 …… which are nothing to blow you away.

Around an hour to an hour and a half before landing breakfast is served. In order to wake you up they play a display on their mood lighting, which was fun to watch.

The breakfast was a choice between western style scrambled eggs, sausage etc or chicken and vermicelli noodles. I went for the latter: 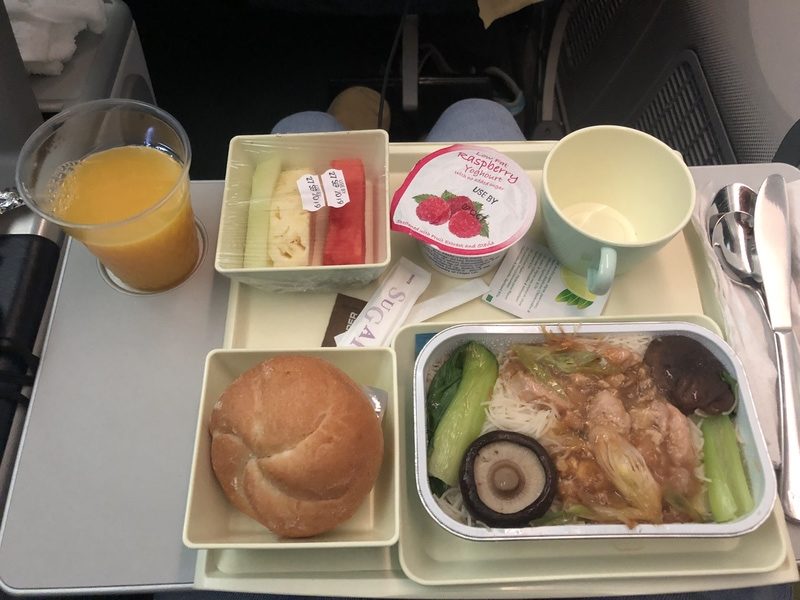 …..  which included another bread bun, selection of fruit and yoghurt.  Given that this was premium economy, the quantity of food on offer was impressive.

The flight concluded with one of the smoothest landings I have experienced.

It is let down a little by the food and drink which is more economy than premium, albeit served in decent sized quantities.

On the other hand, the slippers and abundance of hot towels are not something you would see on other carriers in premium economy and I am very partial to both!  On the whole, premium economy on Vietnam Airlines is a good experience that, with a few tweaks to the soft product, could be excellent.

Keep reading Head for Points over the next few days as I tell you more about my time in this fantastic country.  The final article will look at Vietnam Airlines Business Class.