Virgin Atlantic has now confirmed its Summer 2020 schedule, which will begin on the 29th March.

Virgin has been slowly ramping up its UK-India routes, which suffered a loss when codeshare partner Jet Airways went into administration.

It clearly thinks there is extra flying to be had which hasn’t been mopped up by other airlines, and is introducing a second daily flight to Delhi.  This is in addition to the new Mumbai route which launched a couple of weeks ago.  The new Delhi flight goes on sale on 23rd November.

Next summer Virgin will also start putting its A350s on other routes. Up until now, all the A350s were going on the London-New York route but we will now see a bit of variety in the schedule.

This means that you will still find a variety of Virgin Atlantic aircraft flying to New York, since Virgin will not have enough A350 to run them on all seven daily flights as well as the new destinations.

This is where you will find the A350:

As a reminder, Virgin Atlantic’s A350 comes with a new Upper Class Suite reviewed here, as well as a redesigned social ‘Loft’ area for business class passengers.  It is a major improvement on the current Upper Class product.

As always, there may be last minute equipment changes or timetable alterations.  These new services will be using aircraft from the 2nd batch of A350 deliveries and the dates may slip. 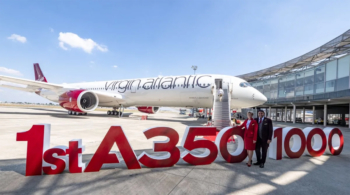 How to earn Virgin Atlantic miles from UK credit cards

As a reminder, there are various ways of earning Virgin Flying Club miles from UK credit cards.  Many cards also have generous sign-up bonuses!

Click here to read our detailed summary of all UK credit cards which earn Virgin Flying Club miles.  That page is regularly updated with the latest special offers and will still be accurate even if you are reading this article months after publication.