Black Friday offers seem to be more muted this year.  It seems that most people have woken up to the fact that few companies are going to offer their best deals four weeks before Christmas.

The good news is that, as we cover travel deals all year, we are in a good position to spot the genuine deals.  The two offers below are offering real value.

I honestly don’t know at the moment if British Airways is planning to drop in a repeat of its ‘2 for £2018’ Club World offer that it ran last year, although it was only for travel in December.

Remember that neither of the deals below can be booked until Friday.  I am covering them today to spread out our Black Friday coverage and to give you a bit more time to think about the best option for you.

The best offer last year was the Air New Zealand offer to Los Angeles.  Whilst it was a bit of a stunt, the tickets did exist – Rhys bought one.

It is back this year.  Air New Zealand is selling 100 economy tickets to Los Angeles at 10am on Friday for just £179 return.  Dates are limited and, frankly, your chances of getting one are slim but feel free to try.

With Air New Zealand dropping its UK services from October 2020, this year is your last chance to get this deal.

ANZ will also have special fares in Economy, Premium Economy and Business to Los Angeles throughout the weekend.  I don’t know how much they will be, but you will find the details on the Air New Zealand Black Friday page. 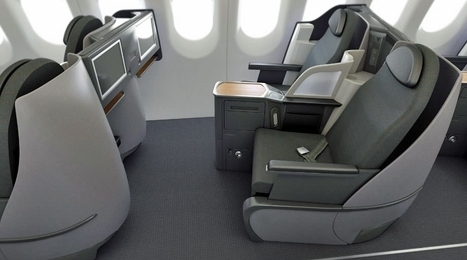 Air China is running the best Black Friday deals to Australia and Asia.

The cheapest offers are out of Germany, so I’ll start with those.  London prices are not bad either though as you will see.

Take a look here and see.  In terms of fares, we’re talking, departing Frankfurt, Munich or Dusseldorf in Business Class:

The last four are, without a doubt, the star deals.  £1,275 to Australasia in Business Class is an outstanding deal.

You must book between Friday 29th November and Monday 2nd December.  Don’t try to book now.   Travel dates for the Business Class sale are (OUTBOUND):

You cannot travel INBOUND between 18th January – 27th January.  You will note that, as usual with Air China sales from Germany, Christmas is NOT excluded.

And if you want to travel from London ….

Here are the Air China deals from the UK.

You pay noticeably more, of course.  More importantly, the travel dates are far more restrictive than the Germany deals and Christmas IS excluded.  You’ll need to travel via Germany if you want to depart between 13th and 28th December.

Only a few sample fares are currently showing.  The best deal looks like Seoul at £1271 or Manila at £1317.

Where can you credit Air China flights?

Air China is part of Star Alliance so you could (depending on which booking class the ticket books into) earn miles and status credit with Lufthansa Miles & More or one of the other Star programmes.  Use wheretocredit.com to find the most generous programme – you are probably looking for ‘R’ class earning which is typically 125% of miles flown.

I know very little about Air China, so do some research on what planes are flying which route and what kind of seating if will offer.  A typical Air China business class is pictured above.  Some flights use brand new A350-900 aircraft with this impressive 1-2-1 layout: 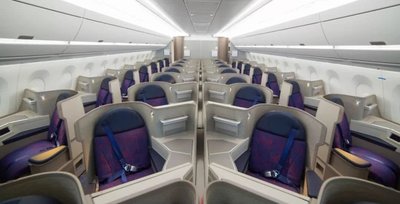 Unless you are booking from Germany and have a 0% FX fees credit card, your best option for paying is American Express Preferred Rewards Gold which offers triple points – 3 per £1 – when you book flight tickets in a foreign currency.  This is because the transaction triggers the ‘double points for airline spend’ and the ‘double points for foreign spend’ bonuses.  Our review of Amex Gold is here.