On Sunday we were the first English-language source to publish the rumours that Virgin Group was attempting to cancel its agreed share share to Air France-KLM.

You can read that article here.

Sir Richard Branson has just confirmed the story on his personal blog.  To quote:

“I have always viewed Virgin Atlantic as one of my children, born 35 years ago around the same time as Holly and Sam, with one second-hand 747 taking on established airlines such as British Airways, American Airlines, Pan AM, and TWA to name a few.

Back in 2008, when BA tried effectively to merge with American Airlines, we fought the merger on behalf of our airline and our customers’ interests, with the ‘No Way BA/AA’ campaign on the side of our planes.

When competition authorities did somehow wave through the BA/AA partnership, we looked for a strong alliance of our own, to protect our wonderful ‘child’ for years to come. We needed to rely on sibling power!

Remarkably, the most impressive of the large airlines, Delta, was there to form an alliance with us. And they have been the best partners we could have wished for. That still left our family in control and owning the airline. But with BA’s clout in Europe we needed further partners to provide feed for the Virgin Atlantic network, and discussions started with Air France-KLM. Agreement in principle was reached in May 2017.

To get the deal done, we initially thought our family would need to reduce its shareholding in Virgin Atlantic. I was willing to do so, reluctantly, to guarantee the long-term success of Virgin Atlantic. 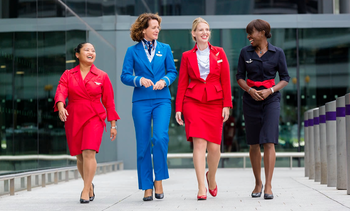 I’m delighted to say the tie-up was approved by various competition authorities, the last of these being the US Department of Transport, who gave antitrust immunity to the new joint venture on November 21st, 2019. Importantly following this news, we have agreed (subject to contract) with our new joint venture partners, that our family will continue to hold the 51 per cent of Virgin Atlantic shares we own. We’ll also continue to work extremely closely with our partners investing together in a thriving airline and holiday company.

This will benefit you all, the wonderful people of Virgin Atlantic and Virgin Holidays, and contribute to a winning partnership. The expanded joint venture with Delta and Air France-KLM remains an essential part of our future and long-term success.”

As I wrote on Sunday, I think this is a sensible move for Virgin Group.  Virgin Atlantic has a lot of tailwind at the moment, with the Thomas Cook collapse removing pressure at Manchester and the acquisition of Flybe offering good opportunities to grow connecting traffic.

There is one other factor I didn’t mention, however.  Virgin Atlantic has started a very public campaign to get a disproportionate share of the new Heathrow landing slots created by the third runway.  The tagline is ‘creating a second national flag carrier’.  Realistically, how could that claim be justified when the airline was 80% owned by US, French and Dutch interests?  With Virgin Group remaining the majority shareholder, Virgin Atlantic will believe that it has a better chance of a fair hearing.

You can read the full story on Sir Richard Branson’s blog here.