This is our review of the Hampton by Hilton Stansted Airport hotel.

We first looked at this hotel in 2017 when it opened and Anika stayed there.  I had never stayed myself, however, and an early morning flight from the airport – coupled with a good value £88 rate – tempted me to book in.  I was also tempted by the offer of £75 cashback on £250 of Hilton bookings, which appeared on my Amex Gold card offers page last week.

In general, I am a big fan of Hampton by Hilton.  I know it is cliched, but they do usually have all the things I want (modern design, a down to earth menu of comfort food, free breakfast, free wi-fi, desks in the rooms) and none of the things I rarely use (room service, laundry etc).

The hotel website is here if you want to book or learn more.

Where is Hampton by Hilton Stansted Airport?

One of the key selling points of the Hampton is that, like the Radisson Blu on the other side of the terminal, it is directly at the airport.  You don’t need a shuttle bus.

This being Stansted, of course, nothing is quite as simple as it seems.  The good news is that it only took me seven minutes from the doors of my train to the hotel reception, and if I’d not taken pictures and knew immediately where to go it would have been five minutes.

However, once I’d taken the lift to the terminal departures hall, I was required to walk outside – partly uncovered – and take a lift back down so I was level with the railways tracks.  There is then a covered walkway, but one which is uncovered from the sides – it won’t protect you from rain if the wind is blowing it sideways.  Don’t expect a simple, level, fully covered stroll from the terminal to reception. 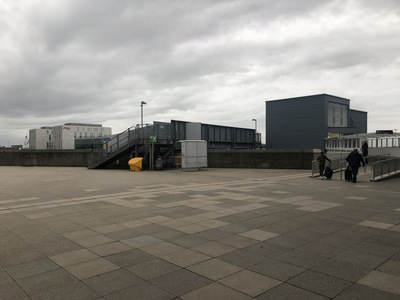 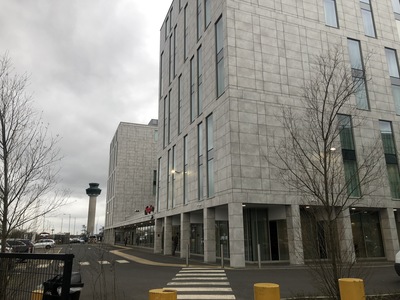 The lobby area is very similar to one in Exeter, and in a good way.  There was this welcome sign: 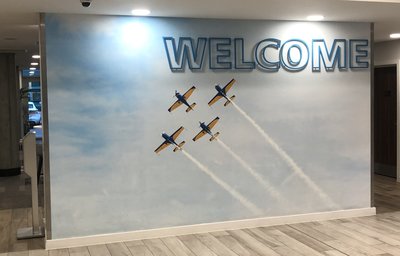 …. which partners with this motif outside the lifts: 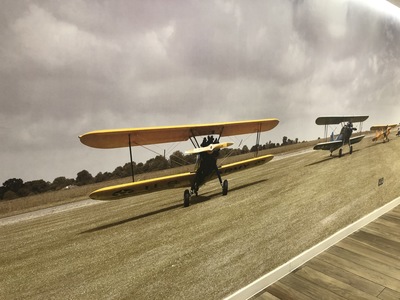 The ground area is neatly zoned.  This is the far corner by some meeting rooms and is the best place to work quietly at a table: 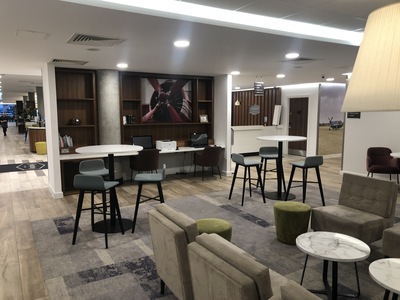 You then come to the bar area: 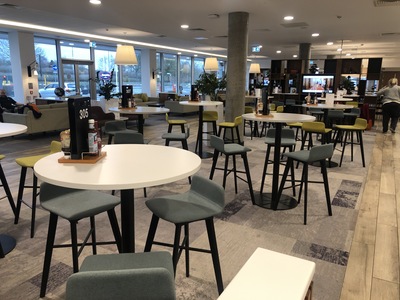 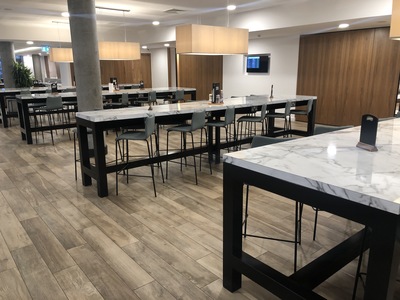 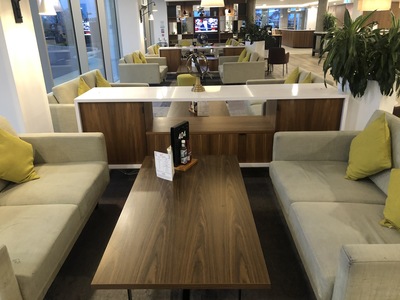 …. with a restaurant at the back: 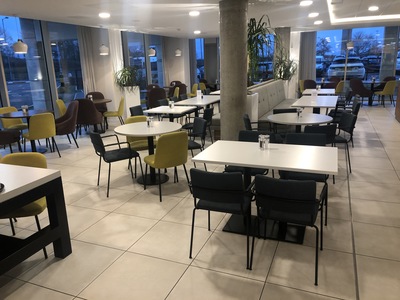 In terms of pricing, the restaurant is around £17 for a main.  It is nothing to scare the horses – BBQ pork ribs, seabass fillet, curry etc.  There is a £4.95 kids menu.  The restaurant is open from 6pm to 10pm.

There is also a separate bar menu served when the restaurant is closed with a modest list of burgers (around £14), salads (around £11) and paninis and pizzas (£10-£15).  In the evenings you can eat in the bar from the restaurant menu.

I should mention that my evening meal was a total disaster.  When I went down around 7pm, I was told that due to ‘issues with the kitchen’ they could only supply food from the bar menu.  This meant that my Diamond amenity of a free appetiser from the restaurant menu (worth around £6) was forcibly swapped for a bag of crisps or chocolate bar.  Thus, I got to eat my first Double Decker bar in about 30 years.

The chicken burger I ordered for £13.95 was shockingly bad.  The grilled chicken was so tough that on numerous occasions I was struggling to cut it.  The chips were ok though …..  I’ve no idea what the ‘issues with the kitchen’ were but they clearly seemed linked to an inability to have anyone on the premises who could cook.

There is also a fitness centre on the ground floor.  When I popped my head in the door there were four people using it, which was a surprise.

Let’s take a quick look at my room.  My Hilton Honors Diamond status got me a room on the 6th floor (out of 7) which overlooked the airport.  This allowed me to see the aircraft parked up.

Here is my biggest gripe: 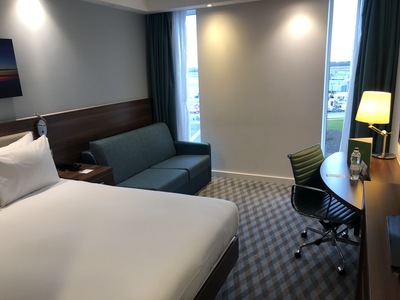 As you can see, there is very little window space.  The windows are basically slats and the bulk of the wall is just that – a wall.

This may be due to soundproofing requirements on a low budget build, because it certainly wasn’t 100% silent.  You might ask what I expect being a few metres from a runway, but the truth is that recent airport hotel openings such as the Hilton Garden Inn at Heathrow T2 (review) have jawdroppingly good sound proofing.  I get more aircraft noise over my house in West London than I did in that hotel.  The Hampton’s soundproofing isn’t terrible but it isn’t state of the art either.

The room looks better from the other angle: 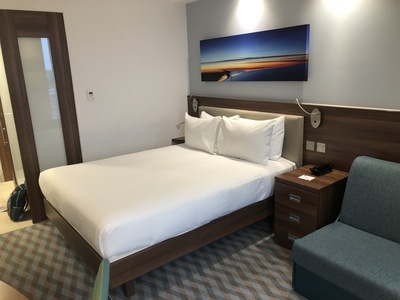 There is a decent sized desk with two plug and two USB sockets, plus a kettle with tea, instant coffee and UHT milk.

The bathroom was spotlessly clean and exactly what you’d expect for this sort of hotel – no bathtub, a single sink, toiletries in large containers bolted to the wall.  It was perfectly fine. 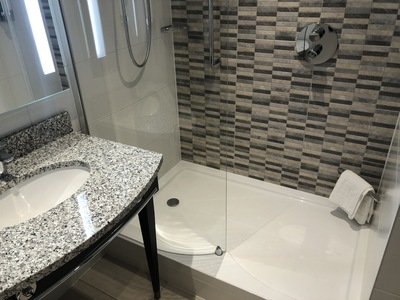 Everyone gets free breakfast at Hampton hotels, which is a key benefit of staying here. 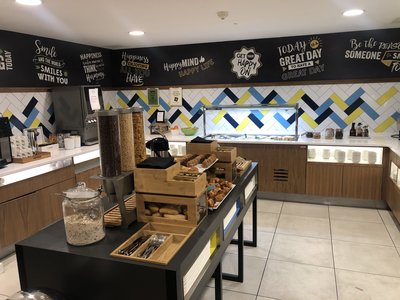 It is done in the standard Hampton style.  There is a decent selection of hot dishes, pastries, fruit (not the best selection) etc.  Everything is self-service, including coffee.  You can either perch on a stool with your food or carry it over to the restaurant. 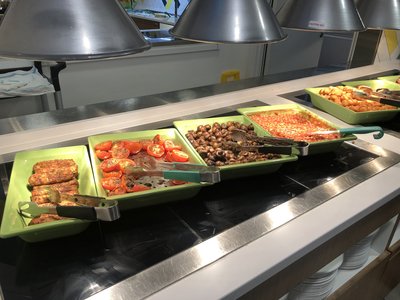 The only thing that I found a bit odd was that the buffet was set up in two identical u-shaped areas.  Because of the way you enter the dining area, you don’t see the second one immediately.  This meant that everyone was getting their food in one area whilst the adjacent area – where I took my photographs – was literally deserted.

Is the Hampton Stansted worth a visit?

This wasn’t a totally pain-free stay.  As well as the low quality evening meal, I had a loo which was badly behaved and didn’t like to flush.  However, if you assume that these are isolated incidents which won’t impact you, I think you will like the Hampton Stansted.

The public areas and rooms look good, albeit bigger windows would have been nice.  The free breakfast is better than you may expect.  The bar and restaurant are perfectly pleasant places to pass an hour.

I paid £88, booked four days in advance, although it obviously jumps around a lot from day to day.  I won’t argue with that, especially as I will pick up a chunk of Hilton Honors points too.

The Hampton by Hilton Stansted Airport hotel website is here if you want to book or find out more.