Over the weekend I looked at the scale of IAG’s liability in terms of how much it may have to refund customers for pre-booked flights.  With €3.5bn of pre-paid but not flown flights at 31st December, it is a big number.

Bank of America published some research yesterday on a similar theme which I think is worth a look.  This is all taken from publicly available financial reports and only covers airlines quoted on the stock market, which is why Virgin Atlantic is excluded.

Here is the first chart.

This looks at the amount of money each airline has banked from unflown flights (much of which will need to be refunded) as a percentage of how much cash it has in the bank. 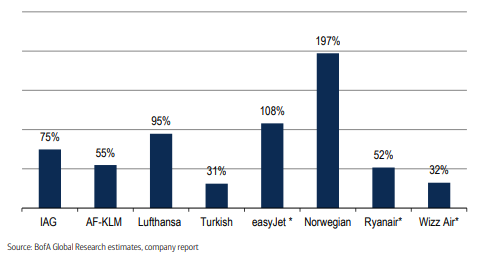 As you can, this is a disaster for Norwegian.  As of its last set of financial statements, it was on the hook for refunds worth DOUBLE the amount of cash it had in the bank.

Turkish and Wizz Air are in the strongest position – they had enough to cash to refund their sold tickets three times over.

IAG’s position is weaker than it looked in my analysis.  This is because IAG likes to talk about ‘cash and cash equivalents’, which also includes arranged loans where the money has not yet been drawn.  Bank of America is looking purely at cash.

easyJet is also looking weaker than its theoretically strong headline numbers suggest.  This explains why easyJet borrowed £600m from the Government yesterday and has been desperately trying to avoid paying cash refunds.

Here is the 2nd chart, which is not as relevant.  This looks at the value of unsold tickets in terms of how many months revenue it represents.  This table is more susceptible to timing influences based on the year end date of the airline, because airlines tend to generate the majority of bookings in the first few months of the year. 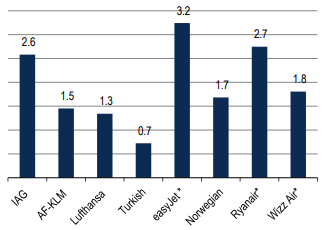 I’m not sure how Turkish can only be sitting on three weeks of advance bookings.  The figures for the other airlines are all roughly similar, and I think differences could be explained by whether they have a December or March year end.