British Airways has just added a new Avios option on flights between Heathrow and New York JFK.  It is reducing the minimum cash component of an economy (and only economy) redemption to £100.

The option is being marketed as ‘Reward Flight Saver’, which is a term British Airways already uses for short haul redemptions.

As a refresher, Reward Flight Saver (or RFS) allows anyone who has earned one Avios in the last year to book a short-haul reward flight with a subsidised level of taxes and charges.  These were fixed at £35 and £50 return for economy and Club Europe, respectively.

Reward Flight Saver is only available on flights operated by British Airways or its franchisees. Codeshares or joint venture flights are not included.

Although in recent years BA has been adding additional balance options for redemptions, the traditional RFS amounts of £35 / £50 have typically offered the most value on a ‘pence per Avios’ basis.

You can read how British Airways Reward Flight Saver works in this article here.

How do you book Reward Flight Saver to the USA?

British Airways is trialling a similar concept under the same name on its long haul network. Currently, the Reward Flight Saver offer is only available in economy on British Airways-operated flights between London and New York JFK.

(So, for clarity, you cannot book this on American Airlines services, or in World Traveller Plus, Club World or First, or to any other US destination apart from New York JFK, including Newark.)

You will recognise the option when selecting flights by the RFS icon:

This is not an accident or technical glitch.  As you will see on this page of the BA website, the Reward Flight Savers information has been updated to include destinations in North America:

“Reward Flight Savers are our best value reward flights. You pay the Avios and a flat fee in cash while we pay the taxes, fees and carrier charges for you. It’s available on selected return flights in Europe, North America* and on southern Africa wherever you see this symbol.”

I asked the British Airways press office if they could give a little more detail on the offer and this is what they had to say:

“Last year we launched an option where British Airways Executive Club Members could book a reward flight to Europe using Avios and as little as £1 return.  Following its success, we are launching a trial on long-haul flights in World Traveller (economy) for as little as £100 return”

This suggests that Reward Flight Saver options will roll out to all US destinations British Airways flies to.  New York is simply the first to have it. 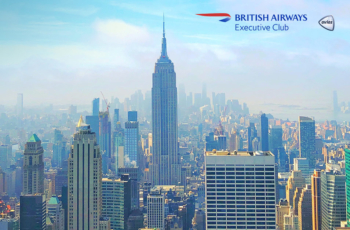 Let me spoil the surprise to save you scrolling down – no.

Whilst taxes have gone down, the Avios required have gone up.

Are economy long-haul Avios redemptions ever good value?  No, as this article shows.  Cutting £130 off the cheapest taxes option should make a difference, but it is accompanied by a higher Avios requirement.  In any event, New York economy flights are usually so cheap that Avios redemptions are rarely great value.

Here is the legacy off-peak pricing you would see to New York Newark, which doesn’t yet have RFS (click to enlarge):

As you can see, the big change is the reduction of the taxes and fees portion of the fare whilst the Avios requirement increases. The ‘headline’ RFS price of a return economy ticket from London to New York is 50,000 Avios and £100. This compares with 26,000 Avios and £241 without RFS, roughly doubling the Avios needed whilst halving the cash component.

If we assume a notional value of 1p per Avios in both valuations, that means that the RFS flight prices in at £600 exactly whilst the legacy flight costs £501.  The cost has gone up!

Under the Reward Flight Saver scheme the value actually increases the fewer Avios you use:

…… whilst the option closest to the traditional Avios cost of 26,000 Avios and £230 is actually cheaper than it was previously.

On the whole, the new Reward Flight pricing IS marginally cheaper than the previous pricing when calculated as a total fare.

Of course, you will often find cash tickets in economy to New York for less than £450.

Let’s be frank.  You can occasionally find them as low as £250.  Redemptions are a terrible idea.

However, you should remember that Avios bookings come with low cancellation fees and the inclusive of hold luggage, which you would not have on ‘Basic’ economy fares. If neither of these factors are important to you a cash ticket will usually beat an Avios redemption on value on this route.

The ONLY people who benefit substantially from Reward Flight Saver in long-haul economy are those who are Avios rich and/or generate Avios at no cost to themselves (eg. from business travel) and so value them at nothing.  These people will see a starting price of 50,000 Avios + £100 as better than 26,000 Avios + £241.  I hope that most Head for Points readers can clearly understand that the latter is by far the best deal.