We are currently running this reader-written feature to provide some positivity and inspiration to Head for Points.  We hope to run one review per day for the next few weeks.  There will be a deliberate mix of European and worldwide properties, super luxury and mid market, branded and independent.  You can find all of the ‘My Favourite Hotel’ reviews so far by clicking here.

Today’s hotel is the iconic Hotel Monteleone in New Orleans, Louisiana. It is reader Alys’ favourite hotel and here is his review:

Step Back into the Past at the Hotel Monteleone, New Orleans …..

Look up at the night sky from anywhere in New Orleans’ historic French Quarter, and you’ll see it. Blazoned in red, fourteen stories up in the air, reads the iconic block lettering of the illuminated sign advertising The Hotel Monteleone. It beckons, enticing you to follow its siren call, through the streets of the French Quarter and into its storied doors. 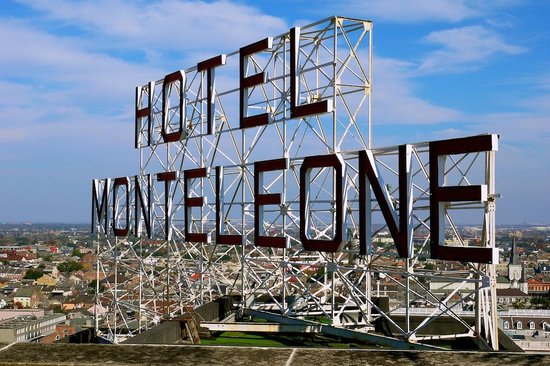 One block off of Bourbon Street, situated at the corner of antique shop-lined Royal Street and the foodie’s paradise known as Iberville Street, The Hotel Monteleone at street-view looks slightly more like a wedding cake than a hotel.

With its ornate, white-painted facade, it stands out amongst the nearby collection of ATM’s and drugstores like a time-traveller who still hasn’t managed to change their clothes yet. And when one enters the gilt front doors – assisted, of course, by The Hotel Monteleone’s famously friendly doormen – it’s possible to leave the neon and modernity of Bourbon Street behind, and to step back into New Orleans’ famous past. 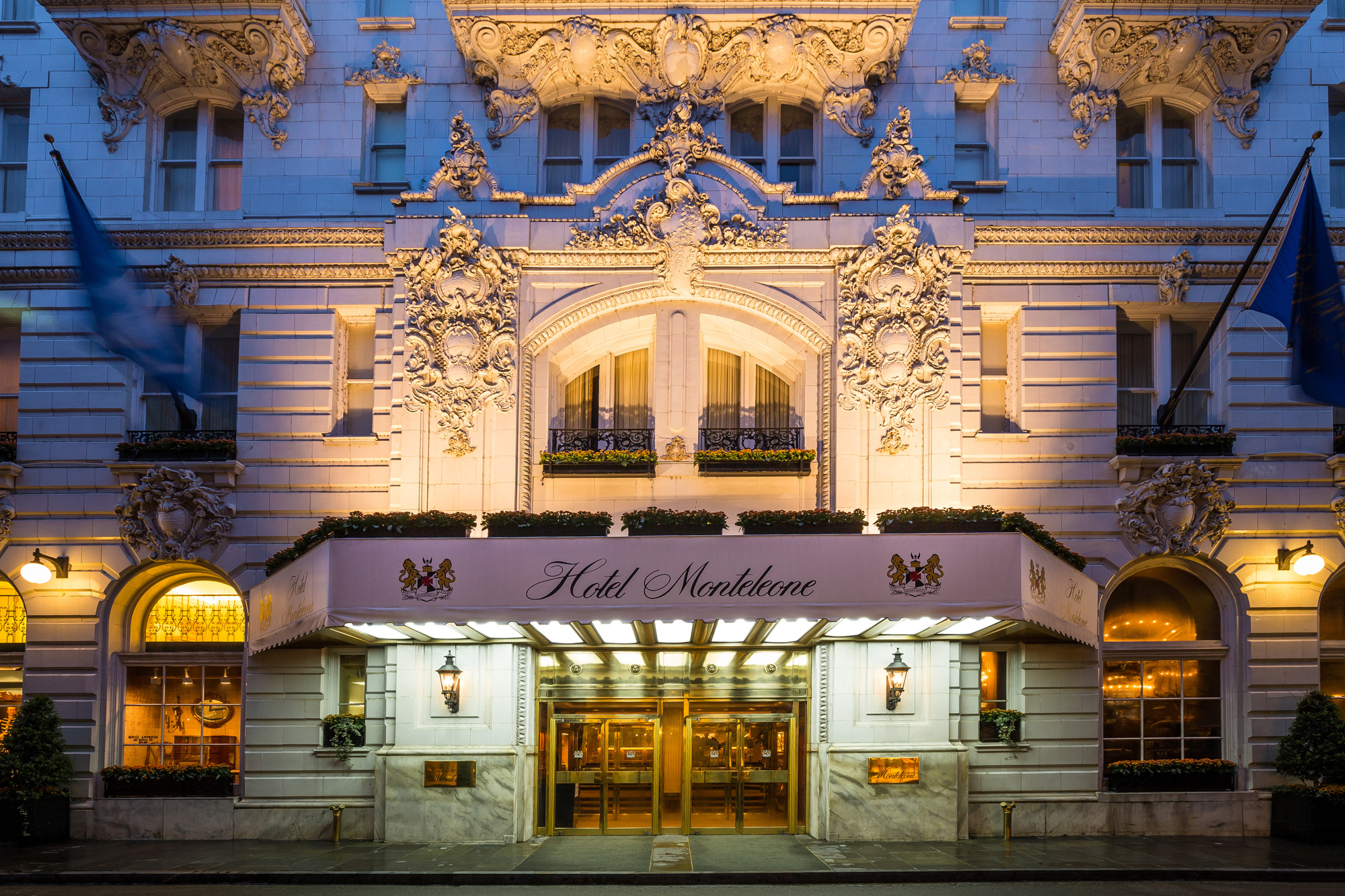 At over one hundred years old, the hotel doesn’t so much wear its age well as proudly shows it off. In the lobby, crystal chandeliers illuminate black and white marbled floors; antique furniture invites visitors to sink even further back in time. Window boxes and glass cases display various pieces from nearby antiques dealers, promising all who pass by an authentic slice of history.

But the beauty and the historic charm don’t end at the lobby. Upstairs, over five hundred guest rooms once again marry the height of hotel modernity with classic elegance – antique finishings and decor sit perfectly alongside high-tech televisions and coffee makers. For the luxurious traveller, suites named after the hotel’s most esteemed guests give one the chance to step into the shoes of the hotel’s most luminous guests, like Truman Capote and Eudora Welty. Ghost hunters have even found a place to call their own, as the 14th floor is said to host the apparition of a playful ten-year-old boy who died there. 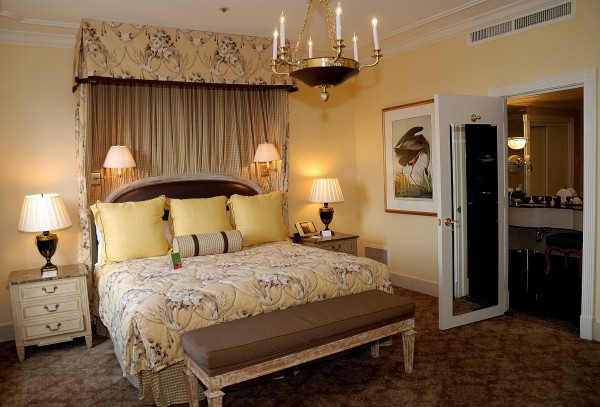 Amenities abound at the Hotel Monteleone, both the historic and the modern. The summer visitor can keep the party rolling from Bourbon street straight into the rooftop pool and bar. Or one can have the knots of their travel worked away in the soothing day spa. Anyone nursing a hangover can enjoy a lavish breakfast at the first floor restaurant, Criollo, and get a taste of the city without even having to brave the early-morning New Orleans sunshine.

But the true draw of The Hotel Monteleone isn’t only for paying hotel guests. In fact, it can even be seen through grand, slightly tinted windows from the street, glinting with the golden glow of a mirage. Those familiar with the work of F. Scott Fitzgerald, Ernest Hemingway, and Tennessee Williams would know it by its original “lounge” name, but today, the weary traveler who wants to drink like a member of The Lost Generation will know it by its current one – The Carousel Bar. 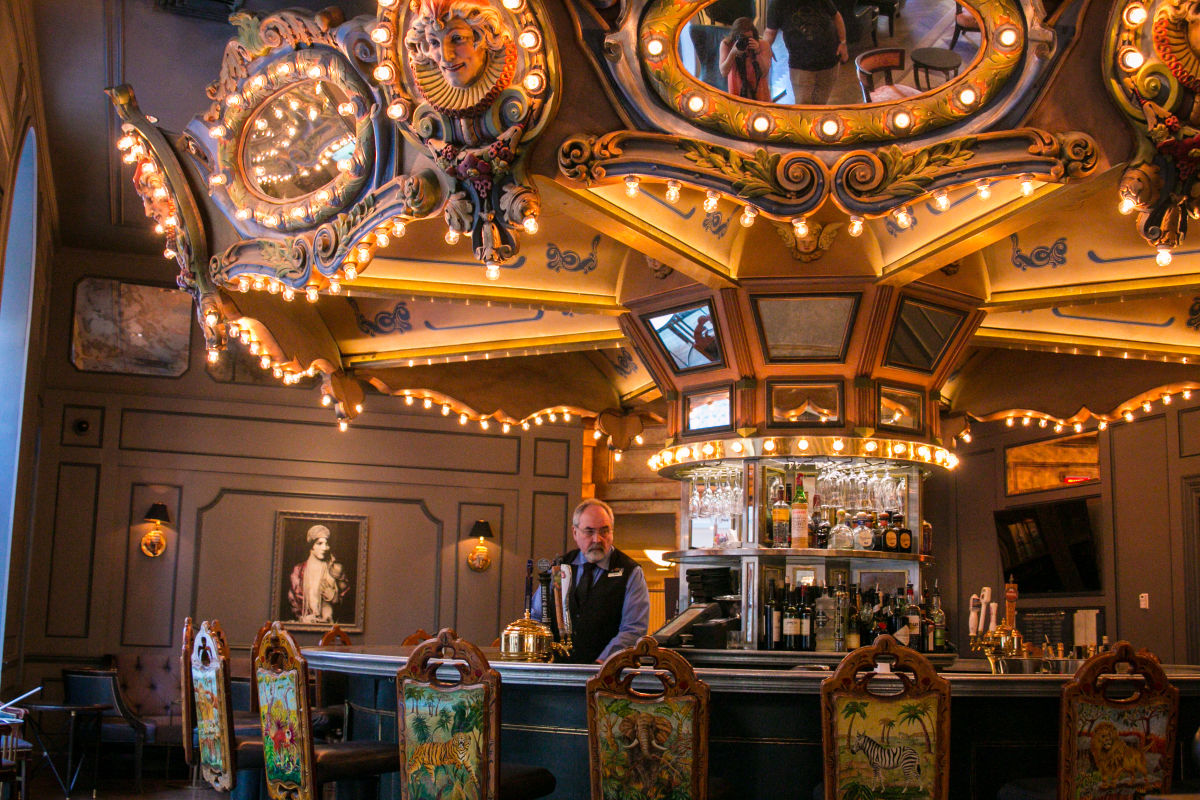 The Carousel Bar is a New Orleans icon, and for good reason. The feeling of stepping back into time that the entire Hotel Monteleone embodies is most embodied here. In the dark corners of the room, one could imagine flappers and fighters alike chatting with Hemingway and William Faulkner.

Every fifteen minutes, the circular bar – yes, built to look just like an antique carousel – makes a full rotation around the two bartenders working diligently in its centre. While a live band serenades you with jazz standards, you can sip iconic, old-fashioned cocktails like the Gin Fizz, the French 75 and the famous New Orleans Sazerac. Here, it’s not only possible to be surrounded by the trappings of the past, but to party like you’re back then, too.

Before it was known as The Historic French Quarter, New Orleans’ most famous district was called Vieux Carre, translated as Old Square. Indeed, this is the promise of visiting New Orleans. Of stepping into history. Of visiting the old, the antique, the classic. And in a city filled with hotels that promise a taste of that experience there is nowhere better to actually get it than The Hotel Monteleone.

For the visitor who wants everything New Orleans has to offer – rich history, beautiful architecture, a little bit of mysticism, and a lavish nightlife – The Hotel Monteleone is the perfect place to stay.  Don’t forget that British Airways now flies directly to New Orleans, so you have no excuse for not visiting.