London City Airport reopened last night, with the first flight being the British Airways service to the Isle of Man.

Here is a shot of the aircraft arriving: 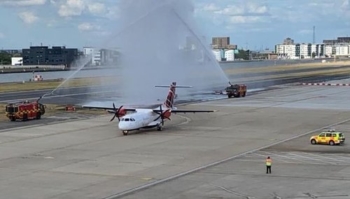 It is ironic that it emerged yesterday that British Airways appears to be dropping the Isle of Man route on Sunday 13th September.  No flights are available for purchase beyond this date.

This was an odd service.  Since 2018 it has been operated by Scottish airline Loganair on behalf of British Airways, using a 50-seat Saab aircraft.

This might not be the end.  Since Flybe went into receivership, Loganair has picked up two other Isle of Man routes – to Manchester and to Liverpool – on top of its existing Edinburgh service.  It is possible that it will continue a London route under its own branding.

If the route is proving financially unviable, we may also see Tynwald (the Manx legislature) stepping in to underwrite a London service.