The collapse of Flybe earlier this year has led to expansion opportunities for the other small UK airlines – Loganair, Eastern and Blue Islands.

Whilst a handful of Flybe routes may be big enough for Ryanair and easyJet to operate, the vast majority are not economic unless you are using small turboprop aircraft.  Loganair, Eastern and Blue Islands are best placed to pick up this slack.

Last week the Government of Jersey announced a £10 million soft loan to Blue Islands.  The collapse of Flybe has exposed the risks of losing air connectivity and it intends to build up Blue Islands as a ‘national champion’.

Jersey is a small market, of course, so Blue Islands also intends to launch additional hubs.   The first is Southampton, where one 70-seat ATR72 will be permanently based.

From 31st August, it will fly:

The airline has launched a new livery.  Here is the Flybe franchised version:

and here is the new independent livery: 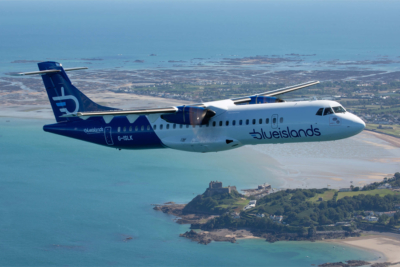 The new Blue Islands website is here. At some point I will take a look at their new frequent flyer scheme, the Blue Skies Club.

(EDIT: Our review of Blue Skies Club is now live and can be found here.)