British Airways is about to mothball most of its Waterside head office for an initial period of at least six months.

This is happening very quickly, with staff meant to be moving out over the next week or so. This is what the press office told us:

We are exploring every option to control our costs. We have a large property estate and we are always seeking ways to manage it in the optimum way.

The majority of back office staff will continue to operate from home, as they have been for the past few months.  There are conflicting reports on whether operational staff will remain in the building – BA says they will – but there will be minimal cost savings if Waterside has to remain partially open.

It is our understanding that the airport operations team will move into the British Airways offices at Terminal 5, whilst the global operations team – including senior management – are going into Technical Block C at Hatton Cross.

Technical Block C is where the British Airways Global Learning Academy is now based, and where the engineering operation is currently based.  It is this building: 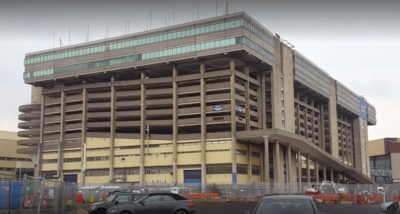 ….. which has engine workshops on the lower levels.

The move will be for a minimum of six months, potentially longer, which means that the majority of staff won’t return to Waterside until 2021. This presumably means that BA expects back-office staff to be working from home for a while yet.

It’s all water under the bridge…

Waterside was supposed to be a revolutionary change for British Airways, as it consolidated 4,000 staff across 14 separate buildings into one and introduced open plan working to the company for the first time. It was also supposed to save British Airways £15 million per year in property costs. 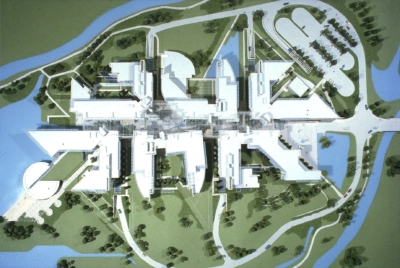 The building is set in 240 acres of landscaped grassland and waterways. Designed by Norwegian Architect Niels Torp, the site is made up of six four story buildings connected by a large glass-covered 175m long ‘street’. The design is supposed to encourage ‘social interaction and informal meeting’ amongst staff. 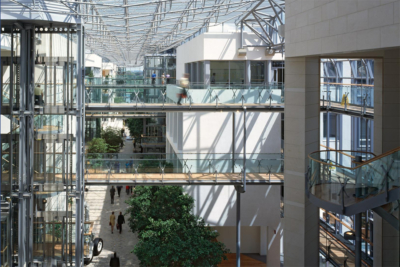 Each building is themed after a continent British Airways flies to. For example, cherry trees blossom around Orient House whilst eucalyptus are in Australia, and Birch saplings surround Europe House.

Waterside opened in 1998 at a cost of £200 million. Its years may be cut short, however, as it is in line for demolition if and when the third runway is built.  The building is situated directly on what is proposed to become tarmac, much to Willie Walsh’s chagrin.