I found this out yesterday.  British Airways has just scrapped flights to Abu Dhabi, which meant that my First Class Avios seats for October half-term were cancelled.

I called “You First”.  The call was picked up within 30 seconds and within five minutes my tickets were changed.

I was moved to a British Airways flight leaving from Dubai.  There was no First Class available so I took a downgrade to Club World and received 72,000 Avios and £40 of taxes back.  This worked out well for me – I got to swap a 2am departure from Abu Dhabi for a 10am departure from Dubai.  Losing First Class is not a concern, as I wasn’t bothered about it in the first place.  I only booked it because I couldn’t get four Club World seats!

The British Airways “You First” telephone number is 0161 448 3013.  It is open 24/7, although if you call outside UK office hours you may be diverted to an offshore call centre and the service level may be different.  It is, I believe, the same team that look after Gold Guest List members.

For clarity, you CANNOT ring this number to make a First Class booking.  However, once you have your booking you can call to make any changes or cancellations. 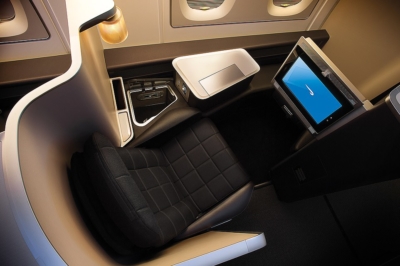 What else can “You First” do for you?

The British Airways website is rather vague about what “You First” offers.  On the webform for contacting “You First” it suggests using them for:

To be honest, I don’t think I have ever used it for anything other than flight changes.

One reason to call “You First” is to pre-book Elemis spa treatments and the cabana relaxation rooms in The Concorde Room lounge at Heathrow Terminal 5.

These services are not currently available due to coronavirus, but as I think you can book cabanas up to a year in advance you may still want to lock one in.

The cabanas have never appealed to me personally but they are good for connecting passengers who want a nap and a shower.  I saw them described as resembling “a disabled bathroom with a daybed” which is about right!  Sitting in the lounge itself is far preferable.

Spa treatments can be pre-booked 28 days in advance of travel.

The British Airways “You First” service is NOT meant to be a concierge service.  They will, however, answer the telephone quickly and deal efficiently with the basics such as ticket changes – although you could justifiably argue that you shouldn’t need to have a First Class ticket to get this level of service!

There isn’t much about “You First” on the British Airways website, but the little there is can be found here.