On Friday evening, British Airways told the majority of its staff whether or not they still had jobs.  The anecdotal evidence is that London Gatwick was hit substantially harder than London Heathrow which has led to increased suspicion that the short-haul network will be permanently shuttered.

It’s not just that Gatwick-based cabin crew appear to have been disproportionately made redundant.  More important is that the British Airways hangar at Gatwick appears to be closing, with staff laid off.  This will mean that anything other than basic maintenance will require an aircraft to be at Heathrow.

The implication of this is that British Airways no longer intends to operate its 30+ short-haul aircraft from Gatwick and that the London Gatwick short-haul operation is now gone for good.  It appears that the long-haul operation, consisting of 14 aircraft, will remain.

It is worth noting that The Telegraph ran a piece yesterday, behind a paywall unfortunately, stating that the South terminal at London Gatwick will not reopen in the near future, and certainly not in 2020.  This also implies that there will not be a British Airways short-haul operation for some time.

This is, of course, still entirely speculative, but British Airways no longer has the cabin crew or engineering facilities at Gatwick to support much of an operation.

Why would BA close down short-haul at London Gatwick?

There are a lot of reasons why closing short-haul makes sense.

Gatwick has very little connecting traffic.  British Airways will not be losing any £5,000+ business class fares by closing short-haul, as virtually no-one was connecting to long-haul.  Apart from Jersey, I don’t think there were any other United Kingdom flights which could connect.

Gatwick is very low yield.  No explanation needed – we all know that Gatwick flights are substantially cheaper than Heathrow flights due to competition from easyJet etc.  Some costs, such as crew salaries and landing fees, are lower too but not enough to compensate.

British Airways may have to use its Heathrow slots this Winter.  Even if the ‘use it or lose it’ rules are not reintroduced in October, it is highly likely they will be in March.  BA needs to get every single flight it possibly can into Heathrow.  The only reason to keep the Gatwick long-haul operation going is, I imagine, to manage passenger numbers in Terminal 5.

It saves a lot of overhead.  Running a terminal at Gatwick is expensive when you are already paying the fixed costs of keeping Terminal 5 open.  The Gatwick long-haul flights can, it appears, be operated from Gatwick North with premium passengers using the Aspire lounge. 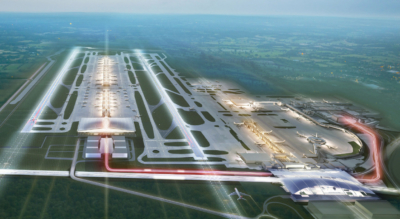 Is IAG going to launch a new low cost carrier?

British Airways has, of course, a substantial portfolio of slots at London Gatwick.  It is only a year or so ago that it bulked up via the acquisition of the Monarch slots.  Is it going to let them go?

easyJet, Wizz and Ryanair would be desperately keen to get their hands on these slots.  Whilst British Airways seems to have decided that ‘point to point’ flying, without any connecting traffic, is no longer profitable, this has never worried the low cost carriers.

There is another option.

IAG could use this opportunity to launch its own low cost carrier from Gatwick.  Branding is an issue, of course.  LEVEL has been mostly shut down in recent months, apart from the Barcelona operation.  Vueling is an option but the brand has a tarnished reputation.  The Air Europa name will be available if IAG’s acquisition completes but the name doesn’t mean anything to travellers in the UK.

IAG could launch a new brand, but the middle of a pandemic is never a good time to do that.  This leads to me think ….. how about Aer Lingus?  The airline has a good reputation in the UK and is already a low cost operator in all but name on short-haul.  I don’t think that UK customers would necessarily find it weird to book Aer Lingus to fly them from London to Palma.

Let’s see.  Much will rest on how long the EU allows airlines to keep hold of their slots without operating any aircraft.  There is an outside chance that the ‘use it or lose it’ rule will restart from the Winter season, launching in late October.  Realistically it is more likely to be Summer 2021, which runs from the last week of March.

Would IAG be able to launch a new low cost carrier from scratch, ready to fly from March 2021?  Does it even want to?  Let’s see.