Most people think that the British Airways Executive Club tiers are Blue, Bronze, Silver and Gold.  There is also Gold Guest List – see here for how you get that – but it is a subset of Gold and does not have its own membership card, unless you count adding the letters ‘GGL’ to the corner of a normal Gold one.

There is, however, another elite tier you may not know about – British Airways Executive Club Premier.

This is the card you get: 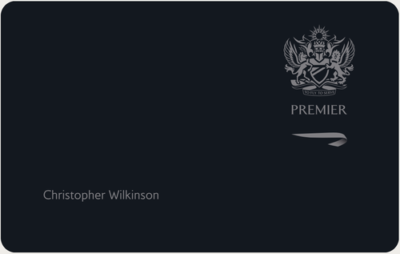 How do you get a British Airways Executive Club Premier card?

This information is taken from official British Airways guidelines I saw, although the guidelines are now a few years old and may have been updated.

The aim of Premier is to keep on the good side of people who control the travel budgets at British Airways’ largest corporate accounts.

Importantly – and this is taken verbatim for the guidelines – giving someone a Premier card:

“will not always reflect the revenue generated for British Airways by the company, but should be based upon the individual’s ability to influence travel policy”

How do I apply?

You don’t.  Based on the guidelines I have, you need to befriend a member of the British Airways board or a key sales manager.  They will submit an application on your behalf.

How many British Airways Premier cardholders are there?

850, at the time of publication of the guidance notes I saw.  However, Alex Cruz made a decision to cull the ranks and that the current number is nearer 450.  The card was allegedly removed from various high profile celebrities and sports stars who had no commercial value to the airline.

What do you get if you are a British Airways Premier cardholder?

What you DIDN’T get, interestingly, was tier points according to the BA guidance, although I believe that this has changed.  Perhaps introducing lifetime status criteria meant that Premier members still wanted to track their points?

As a Premier, you receive all of the benefits of British Airways Gold membership plus:

use of the Special Services team at key airports

access to The Concorde Room at Heathrow Terminal 5 and New York JFK, irrespective of class of travel

ability to give Gold status to a friend or partner

an annual upgrade voucher, allowing a single cabin upgrade for two people – this is the same as the Gold Guest List GUF2 voucher

Anecdotally, from crew reports on Flyertalk, British Airways will remove paying passengers from a flight if a Premier member wishes to travel on it, and will hold flights if a Premier customer is delayed.  BA ground staff are also known to reseat other passengers if a Premier has not been able to select their favourite seat in advance.

Not a bad deal if you can get it …. but don’t get your hopes up!