This is my review of the Radisson Blu hotel at Hamburg Airport.

My New York jaunt is on. Having dropped the family in Hamburg (I will spare you the joys of Club Europe with a 5 yr old and a 1 year old!), I headed off to the Radisson Blu hotel at Hamburg Airport.

Now, if you’re going to stay in an airport hotel, my policy is that you should try to stay in one attached to the airport. Obviously you will usually end up paying more, but you don’t need to mess about with shuttle buses or worrying about getting back to the airport in time.

The Radisson Blu at Hamburg is not in the airport, but is literally 45 seconds walk from the terminal. The walk is almost, but not totally, undercover.

I had booked the hotel for 19,000 Radisson Rewards points, which I got from last Summer’s big promo but which you could also get for 6,667 Amex Membership Rewards points. The non refundable cash price was Euro 119 when I booked.

I am Radisson Rewards Gold via my Amex Platinum. This worked out VERY nicely. I was upgraded to a business class room, which has real benefits – free breakfast, a free Nespresso machine in the room (only powdered milk, though) and free Pay TV films! Everyone gets free internet, whatever room they get.

Here is the room – a comfortable 30 square metres and nicely furnished as befits a hotel that is only 3 years old: 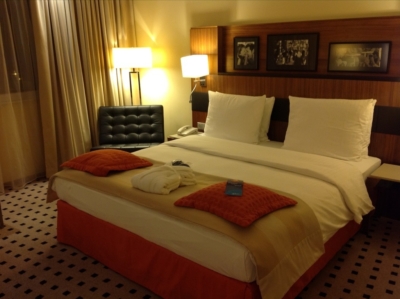 The bathroom was also more than decent, with a large shower (no bath) and – a new first – a small tub of hand cream to add to the usual toiletries! Given the free pay TV, I gave the restaurant a miss and ordered a club sandwich on room service, which was surprisingly good. ‘The Hangover 2’ was not surprisingly good, on the other hand!

The hotel has ‘Express Rewards’, which let you redeem points for in-hotel benefits. Interestingly, for non Gold members, a room upgrade is listed at 10,000 points. Assuming this gets you a business class room, it is a decent deal with free breakfast and the pay TV.

I wasn’t going to have breakfast, but as the hotel had decided to include it, I popped in to the buffet – which was very impressive – and then wandered across the road to pick up my boarding pass for the flight to Frankfurt and then on to NYC.

All in all, this is an excellent airport property. Given that you are only a couple of minutes from the airport S-Bahn which will take you into the city centre, it is even an option for a short break in Hamburg if the downtown hotels are looking expensive.

You can find out more on the hotel website here.