British Airways has released further details about the delivery dates for its first A380 and B787 aircraft, as well as news of the crew training flights that will be operated: 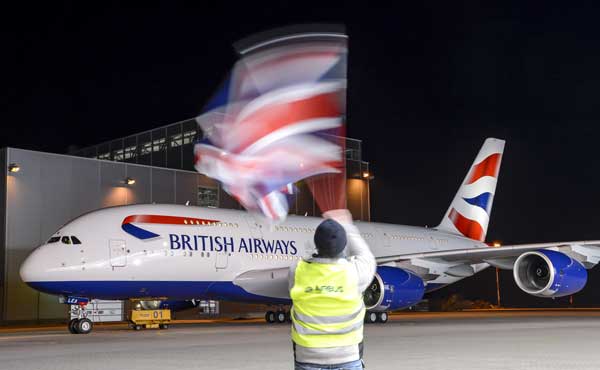 The countdown is well and truly underway as the airline looks forward to welcoming the first of its new aircraft later this month.

In a message to all colleagues, chief executive Keith Williams confirmed the first two 787s would be arriving on June 26 and 27, followed by the first A380 a week later on July 4.

Keith said: “The arrivals mark a historic moment for our airline – our first new aircraft types in 17 years and a spectacular demonstration of our £5bn customer investment programme.”

He also thanked colleagues for their hard work and stressed how planning for this moment started over six years ago.

He added: “Planning started over six years ago but over the past six months we’ve moved into full throttle. Teams from across the airline have come together to ensure our people are trained and prepared.”

The airline is planning to hold a double celebration on July 4 with a live broadcast to colleagues of the A380 arriving in front of 380 staff, some VIP customers and the media. It will then pull up alongside the 787 as the airline officially welcomes both aircraft to its fleet.

Following their arrival, both aircraft will be used for training before they go into service. This will include pilot and cabin crew training at Manston Airport in Kent, customer service trials at Heathrow and a period of short-haul flying – Stockholm for the 787 and Frankfurt for the A380. Flights within the UK will also take place during this period and further details will be announced nearer the time.

I will do what I can to snag a flight on both / either of the A380 and B787 introductory flights (BA – feel free to send me a ticket if you like, raffles [at] headforpoints.co.uk!).  I tried to grab a ticket for the London to Oslo test flights that Norwegian is doing for its Boeing 787’s, but without success (well, without success for business class!) – hopefully I can do better this time.

More details on the A380’s, including some photos and video footage, can be found in this old Head for Points post.