Aer Lingus has launched a raft of aggressive sales prices which may be worth a look.

(Remember that British Airways Executive Club Gold and Silver members get lounge access at Heathrow with Aer Lingus, and that flights earn a – very small – number of Avios.  No tier points though.)

UK to the USA in Business Class for £1,398 does not seem too bad, especially as you can usually clear US security in Ireland and thus avoid the immigration queue in the States. 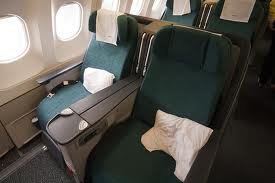 Full details can be found here.  It is worth noting the long validity period – 19th August to 31st March 2014 – although you must book by July 22nd.  Economy tickets on the same routes from the UK are from £275.

Aer Lingus has also launched a ‘fly free’ promotion on short-haul routes, for flights between August and October.  Given the scale of their taxes and charges, you will certainly not be ‘flying for free’ at the end of the day, but the deals are probably OK.