Not content with losing €1m per day, BA’s sister airline, Iberia, has been splashing out on a new logo.  It won’t have been cheap, given that the press release speaks of 9,000 people being put through focus groups in order to get their comments!

This is the new logo:

This is the old logo: 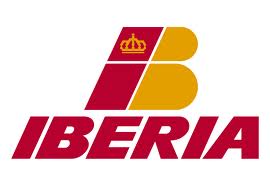 They even spent some money making a video on it as well!  (This video also shows, as I mentioned last week, that the pronunciation of Iberia is NOT eye-beer-ee-ah as the English tend to do.)

And some wise words:

Taking its inspiration from Spanish culture and its influence in the world, the new image is intended to convey an expressive, life-affirming and up-to-date message, reflecting the profound changes underway at Iberia.

The red and yellow of the Spanish flag remain prominent, with a starring role for red as [the] symbol of Spain’s vitality, expressiveness, and art, and of the Spanish character. The design of the company’s IB code letters denotes agility, liveliness, and comfort.

The new logo will be rolled out over the next few months.  I’m not sure what website the people in the video were looking at, because iberia.com has not been refreshed yet when I look at it!