This is my review of the Holiday Inn Express Alcorcon in Madrid.

Regular readers will know that I was in Madrid last week, taking advantage of my Amex Platinum free night at the Grand Melia Fenix.

Whilst I was there, I decided to do something towards my wifes ‘The Big Win’ targets.

As a fairly regular stayer, my personal targets for this promotion were too tough.  My wife, however, does one stay a year in her name.  She was therefore given a very easy set of targets – effectively five nights (one of which we’d already booked before the promo launched) for 71,000 bonus points.

The biggest issue is that she had to stay in two different cities from a list provided by IHG.  Luckily, whilst the list of cities is short, London and Madrid were on it.  Spanish hotel rates are also pretty low at the moment, given the economy and time of year.

I booked her in to the Holiday Inn Express Alcorcon Madrid for three nights: 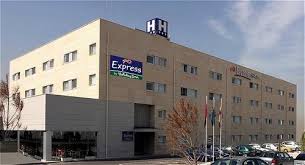 This is a typical ‘edge of city’ Holiday Inn Express.  There is a metro station 6-7 minutes walk away, but it is a trot from the city centre and the walk to the hotel crosses some big roads.

I booked in for three nights at €49 per night.  However, I nearly came unstuck – and there is a lesson here.

Normally, it is not a problem to book a hotel room for 2 people and for someone other than the first named guest to turn up.  This is especially true when the 2nd guest is listed in the booking, as IHG allows you to do.

However, Spain has tough ID rules for hotel stays.  The HIX Alcorcon was not happy that my wife was not there.  They also wanted a signature on a credit card slip for the pre-paid hotel room.

Luckily, I had paid for the room with a credit card in my name, so I was able to sign that.  At the same time (as the slip was stapled to the registration card), I signed the registration card in her name.  The hotel then seemed OK.  After all, I told them she was arriving later ….

I then nipped up to the room, had a drink, ruffled the bed, ran the shower and used the free internet for half an hour before leaving.  I had to hope that they wouldn’t notice the lack of luggage or be bothered that the room would not be slept in for nights 2 and 3.

(The hotel itself is perfectly fine.  A bog-standard Holiday Inn Express room very similar to those in the UK, albeit a bit bigger.  The hotel is clearly fairly new.  There was a light and airy bar and breakfast room on the ground floor and the staff were friendly.  There is also a third-party restaurant next door.

As a Platinum member, I was given two vouchers for the bar.  I traded these for a diet Coke and a Kit-Kat (full size!))

As it happens, there was no problem.  (And there never has been a problem, on the numerous times I have done this.)  My stay posted perfectly to her IHG Rewards Club account five days after check-out.

And, frankly, a lucrative stay it was!  Using some of the new bonus codes I highlighted here, she earned 27,000 IHG Rewards Club points!  I would value those at £135 if used for free hotel stays.

The logic of this mattress run, for me, was simple.  My wife will earn around 120,000 IHG Rewards Club points from this promotion.  That is good for two nights at, say, the InterContinental Paris, worth £500, with £100 of points left over.  The cost of the four ‘mattress run’ nights will be under £200, even with travel costs.

I have a marginal regret about choosing Alcorcon.  From leaving the city centre to getting back (stripping out the internet time I spent in the room) took two hours.

It is also in Zone B on the metro, which requires you to buy an extension to your travel card.  I could have paid a few Euros more per night and picked a more central Holiday Inn Express, although at best I would have saved 40 minutes.  And on a three night stay, those extra Euros accumulate.

You can find out more about the hotel, and book, on this page of the IHG website.