(EDIT, April 2014 – since this story was written, Garuda has scrapped plans to launch direct London flights.  It will now be a tag to the Amsterdam flight.)

Barring any last minute mishaps, Garuda Indonesia will today become the latest airline to join one of the three main airline alliances when it joins SkyTeam as their 20th member.

Garuda Indonesia is the “flag carrier” of Indonesia operating 131 aircraft to serve 39 domestic destinations and 20 international destinations across Asia, the Middle East, Australia, and Europe, out of its four hubs in Indonesia, namely Jakarta, Denpasar, Makassar, and Medan. In line with improvements in various aspects of its performance and service, Garuda Indonesia has won a number of accolades and recognition from both national and international institutions, including “The World’s Best Economy Class” award from Skytrax in June 2013 and the “Best in Region: Asia and Australasia”, by the “Airline Passenger Experience Association (APEX)”, in September 2013.

Even if you have some miles in any of the SkyTeam programmes (Flying Blue, Delta etc), Garuda isn’t much use at the moment.  The only direct flight they have to Europe is from Amsterdam – all of their other ‘services’ are actually codeshares which will not be available for redemption via Garuda.

However, in May they are launching London Gatwick to Jakarta.  This will use the brand new Boeing 777-300ER aircraft which are currently being delivered.  Note that these planes even have wi-fi.

This is the first class and business class product on the new 777’s: 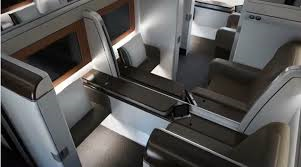 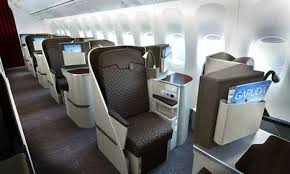 Garuda has a difficult history, and until recently they were not allowed to fly into the EU at all because of their safety record.  All of that now seems to be behind them, hopefully.