I have never looked at ‘seat plan’ websites before, so I thought it would be interesting to take a look at the three main alternatives.   If you are looking for the best British Airways economy seat or the best Club World seat, are they a real help?

I looked at three of the seat plan websites – Seatplans.com (owned by Business Traveller), SeatExpert (owned by Milepoint / Boarding Area / Inside Flyer) and SeatGuru (owned by Tripadvisor).

I thought I would compare what each suggested for someone flying a British Airways 747 in Club World (the 52 seat variant).

Seatplans has a relatively cluttered layout.  You can search by flight number or airline.  The site also includes flight reviews both from Business Traveller magazine and from commentators – the only site to feature ‘official’ reviews. The latest BA news stories from the magazine are also linked in.

Looking at their World Traveller description, it has not caught up with the 787 and A380 launches.  However, when you click the next page the seat plans are there.

Unlike other sites, Seatplans.com outlines its recommendations in article format.  This seemed more reader friendly and allows them to discuss issues such as the position of Club World behind World Traveller Plus.  (It doesn’t mention that the World Traveller Plus people will steal all the snacks from the Club Kitchen though!)  Other sites just show a seat map and make you hover over seats with your mouse to find the best option.

There was no mention of the baby bassinet seats in Club World – I would personally want to be as far from those as possible.  It does say “remember that if there are children in Club World, they will be on the lower deck” which is generally true but not a BA rule.

Upstairs, 64K / 64A were not specifically mentioned even though they are generally preferred by people who want absolute privacy.

There was no mention of the fact that the middle rear-facing seat pairs are effectively a double bed which you may not want to share with a stranger – although there is a photograph.

The inclusion of photos is one of the strong points on Seatplans.com.  Overall, I liked their editorial approach but you may want to use it alongside one of the other two ‘hover your cursor’ sites.

SeatExpert loses points instantly for not having the BA A380 or 787 seat plans available.  They may be new aircraft, but it is unfamiliar aircraft where you are more likely to want guidance.

It was also behind the game when I looked at the 747 seat map, with the commentary not reflecting the fact that many of these planes now have the new First Class seats (“First Class has older (but still very nice) demi-suites with lie-flat beds”).

When you turn to the seat plan itself,  the paucity of commentary makes it hard to differentiate between good and bad.  The worst seat upstairs is still better than the best seat downstairs, in my opinion, but you would not know that from looking here.

64A / K upstairs are dismissed for being close to the toilets, despite their popularity as very private seats.

More importantly, the seat diagram shows all seats facing forwards – you need to hover over a particular seat to discover which are rear facing.

Downstairs, the middle pair are described as having ‘increased privacy’.  This is true for a couple, but not for two single travellers!  No mention of the baby bassinet positions.

Seats on the wings are marked ‘obstructed window view’ which is not really true unless you consider the wing to be obstructing the view!

In general, I got the feeling that the commentary had been written by computer which assigned fixed comments to bulkhead, aisle and window seats.  With no photos, you had little idea what you were getting.

The seat map for the B747 was easily the most impressive of all three sites.  It was the only one to show a detailed graphical representation of both First Class and Club World – the diagram made it very clear how the seats were laid out. 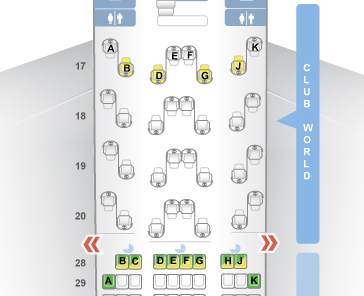 There were some photographs, but all had been submitted by TripAdvisor users.  There was no sense of curation – shots of plane exteriors, for instance, were not very useful!

It scored well on being the only site to recommend you ignore the middle seats if travelling alone.  Yet again, there was no mention of the baby bassinet seats.

Unlike SeatExpert, SeatGuru did not find the existence of the wing outside the window to be a problem!

Upstairs, 64A IS recommended as being especially private.

My review is obviously based on a very small sample of one plane type flown by one airline. However, with that caveat, SeatExpert is clearly behind the game in terms of missing new aircraft types, having no photos and giving the feeling that the comments are computer generated!

Both SeatGuru and Seatplans.com had good features.  I would recommend using both together.  Read the editorial at Seatplans.com for an overview of the cabin and to see actual seat photographs, and then visit SeatGuru to check out their graphically impressive seat plan and the individual seat comments.