One of the few criticisms of the Club Carlson scheme which covers Radisson, Park Inn and Park Plaza, is that it lacks a lot of aspirational luxury hotels.  Carlson is trying to break into this segment via Quorvus.

This will NOT be the name of a hotel chain, but simply a marketing brand.  As of today, there are three hotels inside Quorvus:

The May Fair in London, which was historically the ‘flashiest’ Club Carlson hotel – although I was never desperately impressed

The Edinburgh and Kuwait hotels were previously the two hotels which carried the Hotel Missoni brand, which Carlson managed.  Despite being run by Carlson, these two hotels were never part of the Club Carlson programme.  Now they are.

If you are looking for a ‘smart’ redemption in Edinburgh, the G&V may fit the bill.  The photo below comes from the Missoni days but I don’t think it has been refurbished: 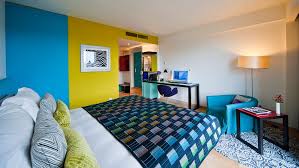 This is pretty poor value for Club Carlson points.  This is especially true when compared to the main Radisson Blu which is the same price for cash but only 50,000 points.

Whilst it is good to see these hotels now available for points, Club Carlson needs to do some SERIOUS thinking about the points required before they start to become attractive.