As I wrote yesterday, Italian airline Meridiana has just relaunched its loyalty scheme as Meridiana Club – and is using Avios as its loyalty currency!  Read the previous piece if you missed it to get the full story.

Part of the arrangement is that British Airways Executive Club members can now redeem on Meridiana.  At present you need to ring but I understand that flights should be available online later in the year.

So where can you go?  Here is the English-language Meridiana website.  They say:

Today Meridiana offers a wide range of flights and leisure type destinations: with regard to the national and international short and medium haul scheduled flights, from the main Italian airports, it is possible to reach Sardinia (Olbia, Alghero and Cagliari), Sicily and Naples as well as major holiday destinations in the Mediterranean or in Egypt such as the Canary Islands, Greece and the Red Sea while the principal long range destinations, mainly serviced from Milan Malpensa and/or Rome Fiumicino, are the Maldives, Mauritius, Kenya, Zanzibar, Madagascar, Cuba, Santo Domingo and Brazil.  The airports of Olbia – Costa Smeralda, Cagliari, Catania, Naples and Verona with Milan and Rome are the airports of reference in Italy.

What does this mean in practice? 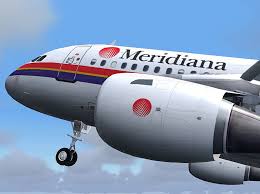 These appear to be Meridiana’s routes from the UK:

Gatwick to Cagliari (which BA will restart from Gatwick next Summer)

Don’t choose Meridiana if you have a lot of luggage – the cost of a 2nd suitcase is £57 each way!

I will talk about taxes in a minute.

Would people seriously consider connecting in Italy onto a long-haul operated by Meridiana?

Good question.  It certainly won’t be due to the terrible online reviews of their punctuality or a desire to try their business class seat, which looks like this: 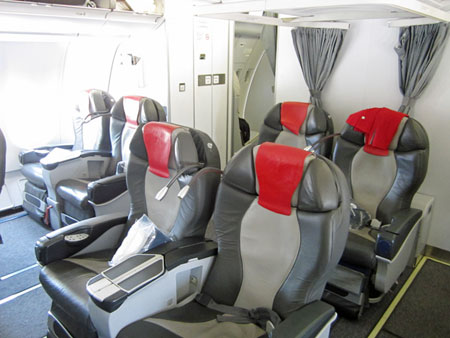 They run an 18-seat business class cabin, with entertainment provided by handing out iPads!

This seems to be the long-haul network:

The Meridiana website also mentions departures to Cuba but I haven’t tracked this down yet.

The taxes number is, to put it mildly, all over the place.

A Head for Points reader was quoted a crazy £191 yesterday in tax for a return flight in Business Class from Gatwick to Cagliari!  And yet:

Gatwick to Cagliari, booked on meridiana.it, shows taxes of £36 in Economy and £49 in Business

Gatwick to Cagliari, booked on Expedia, shows taxes of £183 in Economy and £196 in Business which matches, stripping out Expedia’s fee, what our reader was quoted.

Gatwick to Cagliari, booked on Expedia but as a BA codeshare (still on Meridiana) shows £79 tax in Economy (would not price in Business)

Using the ITA fare price tool, it is clear that there is a massive fuel surcharge of £147 built into the Economy fare from Gatwick to Cagliari.  For some reason the Meridiana website builds this into the base fare and does not show it under charges.

Given these charges, it is very unlikely that you would be looking to redeem your Avios on the short-haul routes from Gatwick.

Ironically, on long-haul, it is not so bad.

British Airways would charge around £550 in taxes – should you be lucky enough to find seats.  That said, once you have stripped out the cost of getting to Milan and the substantially poorer seat and facilities, it doesn’t represent any real saving.

All in all it is a bit disappointing.  Unless there is a major change in the tax situation I cannot see Meridiana becoming a serious part of your Avios thinking.