At the end of March, US Airways joined the oneworld alliance following its acquisition by American Airlines.

This opened up some attractive new routes from the UK and Ireland to the United States.  One of the reasons they were attractive is that British Airways was not levying fuel surcharges on these redemptions.

Instead of the standard £550 taxes and charges for a business class return, you only needed to pay:

This is effectively just the UK Air Passenger Duty plus a few tiny add-ons.

Sadly, these deals are no more.

Take a look at the screenshot below: 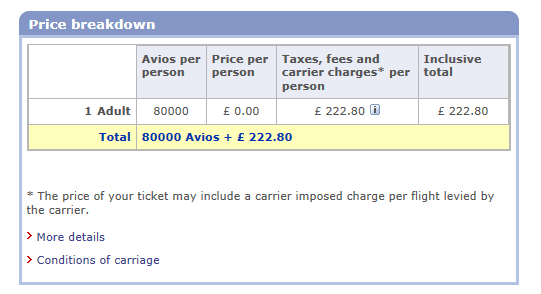 (I tried to pull up examples for ex-UK flights but ba.com would not play ball.  It was refusing to show business class flights which the US Airways website showed were clearly available.  It would also happily show US Airways international flights when a BA domestic connection was attached, but would not show the same flights without the UK domestic add-on! I could get ba.com to price an economy return from Heathrow to Charlotte. This priced at 40,000 Avios and £360, in line with what a BA redemption would cost.)

This is not BA’s fault, per se.

As One Mile At A Time explains here, US Airways is now filing its fares differently in the central airline pricing databases.  Instead of just filing a base fare, it has split the base fare into a smaller base fare and a big fuel surcharge.  ba.com is simply doing what it is programmed to do, which is to add on any fuel surcharge shown in the pricing database.

I hope that a lot of you managed to get some US Airways redemptions booked whilst the fuel surcharges were not being added.  This was never going to last beyond the start of 2015 anyway – once the US Airways name was dropped and all flights converted to American, it was 100% certain that American-sized fuel surcharges would start to be added.  I was just hoping it would last a bit longer.

If you DO have US Airways transatlantic redemptions booked, you cannot now change the dates.  If you do, British Airways will reprice the taxes and you will be forced to pay an extra £200 per person (plus the change fee!).