I wrote about the Conrad Hotel in New York last year (hotel website here).  The hotel had some good points but, overall, it didn’t fully work for me.  But now I was back!  Why?

Here is most practical reason.  I was sitting on a large pile of Hilton HHonors points.  I had converted some Amex Membership Rewards points to Hilton last year for a redemption which we ended up cancelling.  I wanted to use them up if I could. 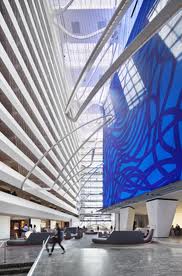 Secondly, the hotel does have a lot going for it:

Free breakfast as I am Hilton Gold

Free internet as I am Hilton Gold

I was in a different part of the building this year and did not have to walk down the almost unlit (they think it’s arty) corridors as my room was overlooking the huge atrium.

I also got an upgrade to a 70 square metre suite, but more on that later.

When Hilton HHonors was massively devalued in 2013, one sop was the introduction of ‘Premium Room Rewards’.  These allowed you to redeem for effectively any room in any hotel.  The downside was the value for money you got – it worked out at under 0.2p per Hilton point.

During early 2014, though, Hilton seemed to pull back a bit.  Some hotels started struggling because no-one could afford to redeem there (some hotels jumped from 50,000 points to 95,000 points) and, in big tourist cities, redemptions were a big part of their business.

Hilton did not let struggling properties drop down a reward category or two, making them cheaper.  What has happened is that some properties now have occasional special deals on ‘Premium Room Rewards’.  My Conrad New York room was one of these.

My ‘Premium Room Reward’ was for a Riverview Suite.  This was selling for $329 + tax, or just 65,500 points!  It was cheaper than booking a standard suite!  Not only that, but it was only one level below a corner ‘Premier Suite’ and I thought I might get upgraded to this as a Hilton Gold.  (I was.  It was 70 sq m and very pleasant!).

Here are a couple of shots of my ‘Premier Suite’.  The extra space (70 sq m vs 43 sq m for a normal suite) is all in the dressing area (not pictured) and the larger living room.  The bedroom and bathroom are almost identical to the standard suites as far as I can remember.  The bathroom could have been a lot bigger – it is not clear on the picture but the bath is effectively square and it is impossible to lay down!

There are some other pictures of the hotel in my post from last year. 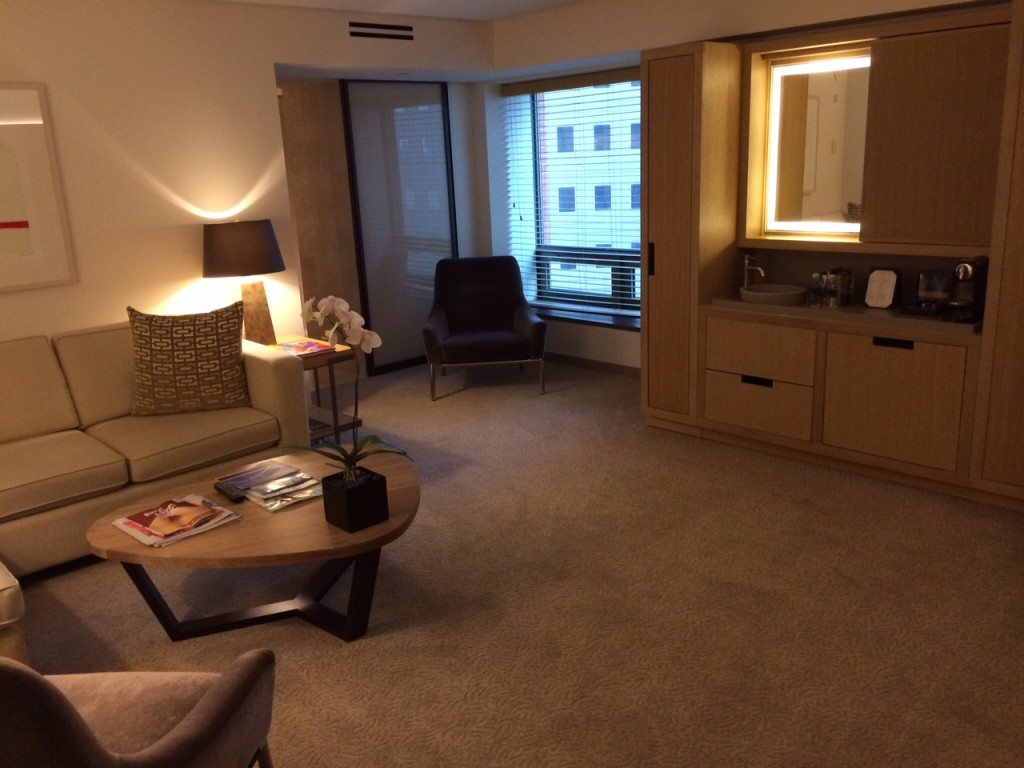 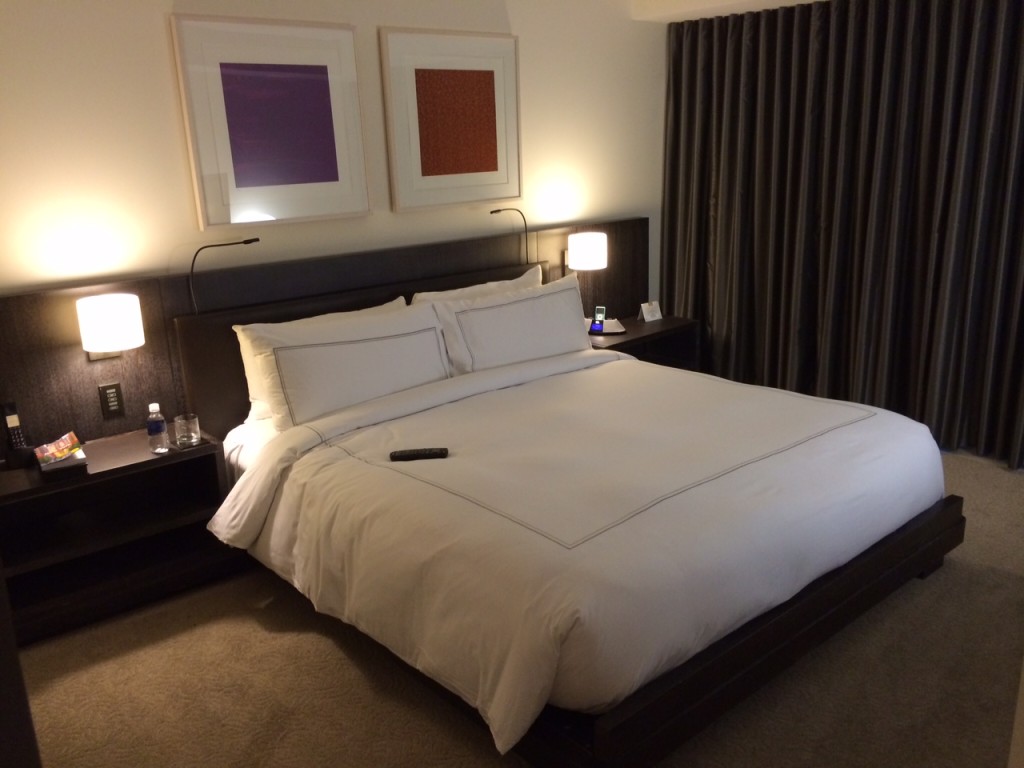 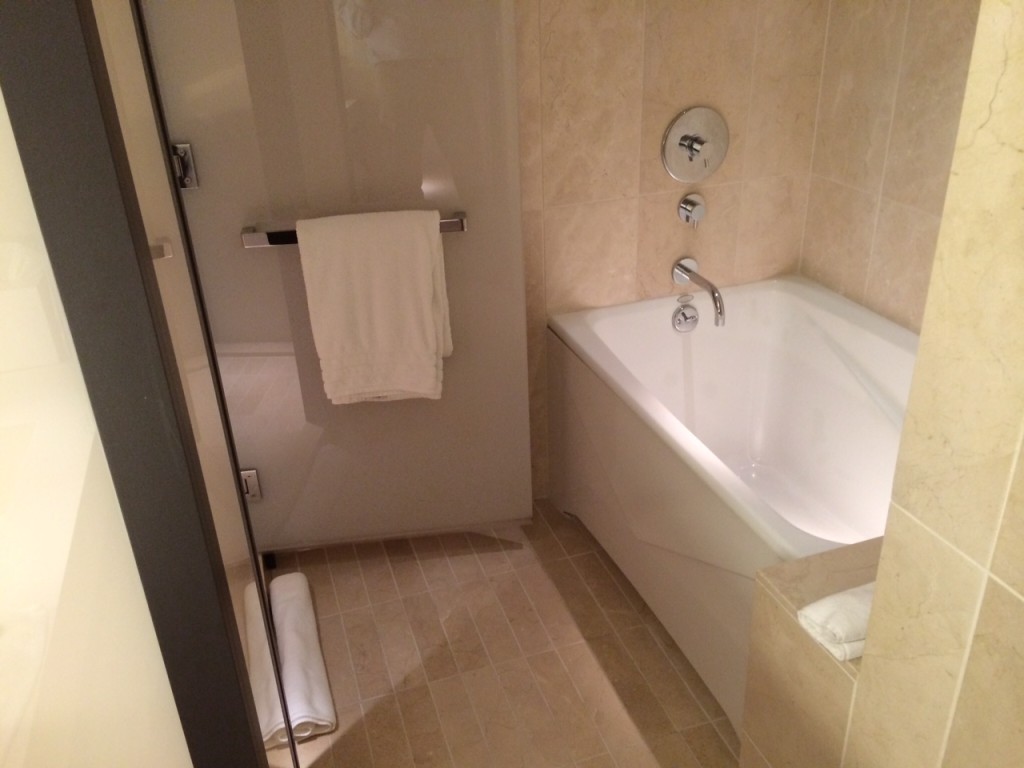 As construction on 1 World Trade Centre winds down, the access route to the subway from the hotel is getting easier. It is still a 5 minute trot to get to it, but the upside is that you are walkable to huge number of lines across a few different stations.

The Battery Place shopping and restaurant mall (Brookfield Place) will also fully reopen soon and will be directly connected to the World Trade Centre site, cutting out the need to cross 6 lanes of highway to reach the subway!

Even as it stands, you won’t go hungry here. There is a Shake Shack in the building (and a cinema!) plus a 24 hour bagel place which actually sells quite a lot more besides. The covered mini-mall outside the hotel also has a deli / supermarket and 3-4 other restaurants.

To be honest, in Summer, Soho House would be my preferred choice because of the outdoor rooftop pool and location. On a short trip without my wife, though, it was difficult to justify the cost – especially as I had the Hilton points to use up. The Conrad and I are now on better terms with each other and I would definitely use it again.